echnogym and Dior have teamed up to create an exclusive

Stephanie Borg has been invited to be the Artist in

DAAA Haus and James Vella Clark collaborate to create the 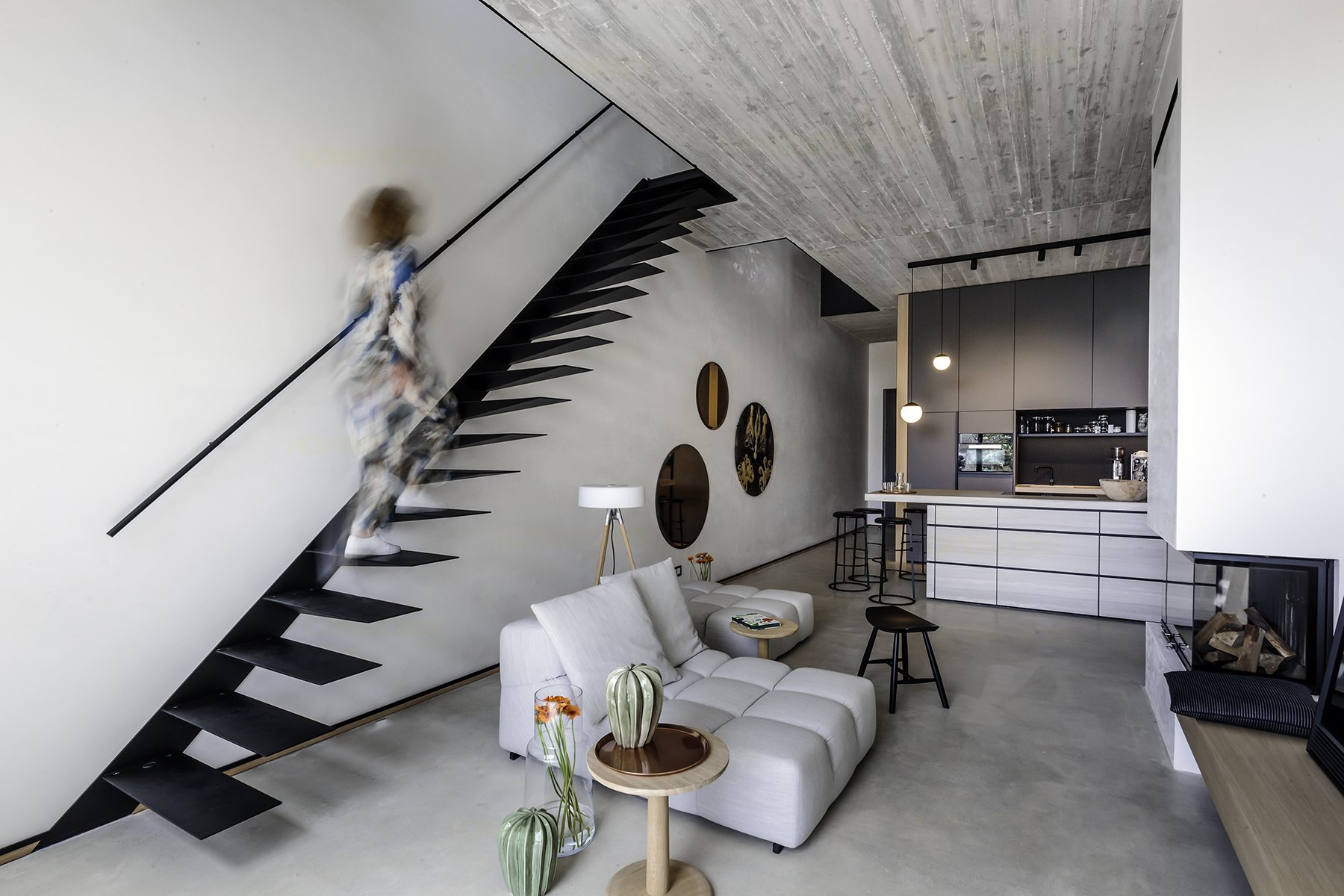 Architect and interior designer couple and team Sonja and Keith Wright have had a relationship with Gozo for a long time. In 1988 they purchased a 250-year-old farmhouse, which they renovated. ‘It was a lot of hard work and it was ongoing, which is why we decided to sell it in 2006,’ says Keith. ‘We still liked the island very much, but we thought we would prefer to spend our weeks here enjoying it rather than working on the house. So we went about looking for another space.’

‘We were motivated by clever small space planning in Japan’

Knowing about the difficult plot sizes – 5 x 20 meters – on Gozo (and Malta) and conventional planning that featured long corridors and rooms off to one side which offered extremely limited natural light and ventilation, the designers saw the small plot space as their definition of the project. ‘We were motivated by clever small space planning in Japan’, says Sonja. ‘We thought, “okay, how can we do this differently? What are the possibilities?” This is where it all started.’
The couple embarked on planning and creating a home with as much natural light, space and ventilation as possible, to the point of forgoing an air conditioning system altogether. ‘We wanted to get light into the deeper areas and the main solution to the challenge was to bring it in from as many points as possible,’ says Sonja.
The staircase is the aesthetic focal point, but also the physical one. It’s the point where light crosses and ventilation is created, from the vertical window at the back, the glassed void in the middle, and the window at the front. This ‘x’ of light and air is the main aspect which aids in their connection. ‘This is why the windows are right up to the top of the top floor,’ says Keith.
As part of the planning process, the designers built physical models as well as preparing internal renderings to evaluate all spaces and the effect of light and spatial relationships in day and night situations. Among other issues, this led to the decision to open the void under the second stair flight at the expense of floor space.
Based on both their experience with the previous Gozo farmhouse and their relationship with suppliers through their architectural firm, the couple approached a father and son team from Gharb, as well as bringing in some materials and installers from Germany.
‘In the beginning, the locals’ reaction was – “but it’s just a garage!”’ says Keith. ‘The local team built the shell with the exposed concrete ceiling. Then we organised a troupe comprising a carpentry and metalwork company we have experience with to come over to Gozo from Germany for two weeks.
‘First, we wanted the blades of the stairwell as cantilevered out. Upon close inspection, the metalworker didn’t trust the quality of the structure so he wouldn’t do it without a string.’
‘But now… we actually like this more,’ Sonja says. ‘This is the way with development sometimes. It’s the same at the back. At first, we wanted the glass façade as the exterior wall, but then MEPA informed us that it’s a requirement that a certain amount of your exterior wall is stone, so we had to create an extra wall to meet this requirement. As a result, we added a wall made of old stone. So now, in the end, it provides shade and we really like the way it looks, especially with the effect of the up-lights on the walls at night and the reflection.’
The windows were of particular importance since they were such a main feature, both aesthetically and functionally. Schüco windows were brought in with the advantage of casing a system which gathers rainwater to direct it away from the interior of the house. The subtle Spartherm fireplace runs throughout from bottom to top. Electrical underfloor heating was installed to ensure warmth underfoot, although, ‘this may be one of the few elements we would have done differently, as it takes a long time to heat up and also misses the kitchen, which we spend a lot of our time in,’ says Keith.
Mainly put together by Sonja because this is her speciality area, the Vitra and Gubi furniture is simple, with pieces that create a congruity throughout, a repetition of the materials cork, metal, and oak. The outdoor space can be made into the main space quickly and easily by just moving a few lightweight Fredericia chair stools. Beautiful, simple, and clever Tobias Grau pendant lights appear throughout.
‘When designing a small space, you have to be careful when adding loose furniture so that it doesn’t look like too much or too little,’ says Sonja. ‘We repeated certain pieces on the different levels so that a congruity was created and so that you don’t get the feeling that there are too many items included. I stuck to black, white and grey tones with a few focal pieces of colour.’
When it comes to celebrating the clever creation of space, this Gozo home is a brilliant illustration of success. Cross ventilation and seemingly simple planning has taken an essentially very small space and transformed it into one that feels effortlessly bright and airy.

The staircase is the aesthetic focal point, but also the physical one. It’s the point where light crosses and ventilation is created, from the vertical window at the back to the glassed void in the middle, and the window at the front

A functional oak box extends from the ground floor to the top of the house. On this level, it cleverly conceals a utility room and a small guest bathroom, as well as containing kitchen cupboard space

An outer stone wall was added to meet building regulations, and now provides shade and a pleasing contrast between old and new. At night, the wall is up-lit

Floor to ceiling windows bring in light; beyond are fields which, with the absence of any buildings, create a tranquil vista

The staircase is the aesthetic focal point, but also the physical one. It’s the point where light crosses and ventilation is created, from the vertical window at the back

At first, Sonja and Keith wanted the stairwell cantilevered out but for safety, opted for supporting strings; the couple prefer this end result

Without the limitation of walls, the space feels light and airy, with room to spare

Contained within the oak box at this level is a luxurious bathroom with a spacious walk-in shower, as well as a walk-in wardrobe

Framed within the exposed concrete ceiling, the contoured stairs create an architectural accent providing air and light in what is otherwise a narrow space

The upper floor serves as a relaxation area with the Stingray rocking chair by Thomas Pederson for Fredericia. On the wall, custom-made artwork repeats the motif of three circles of varying size that can be found on the ground floor 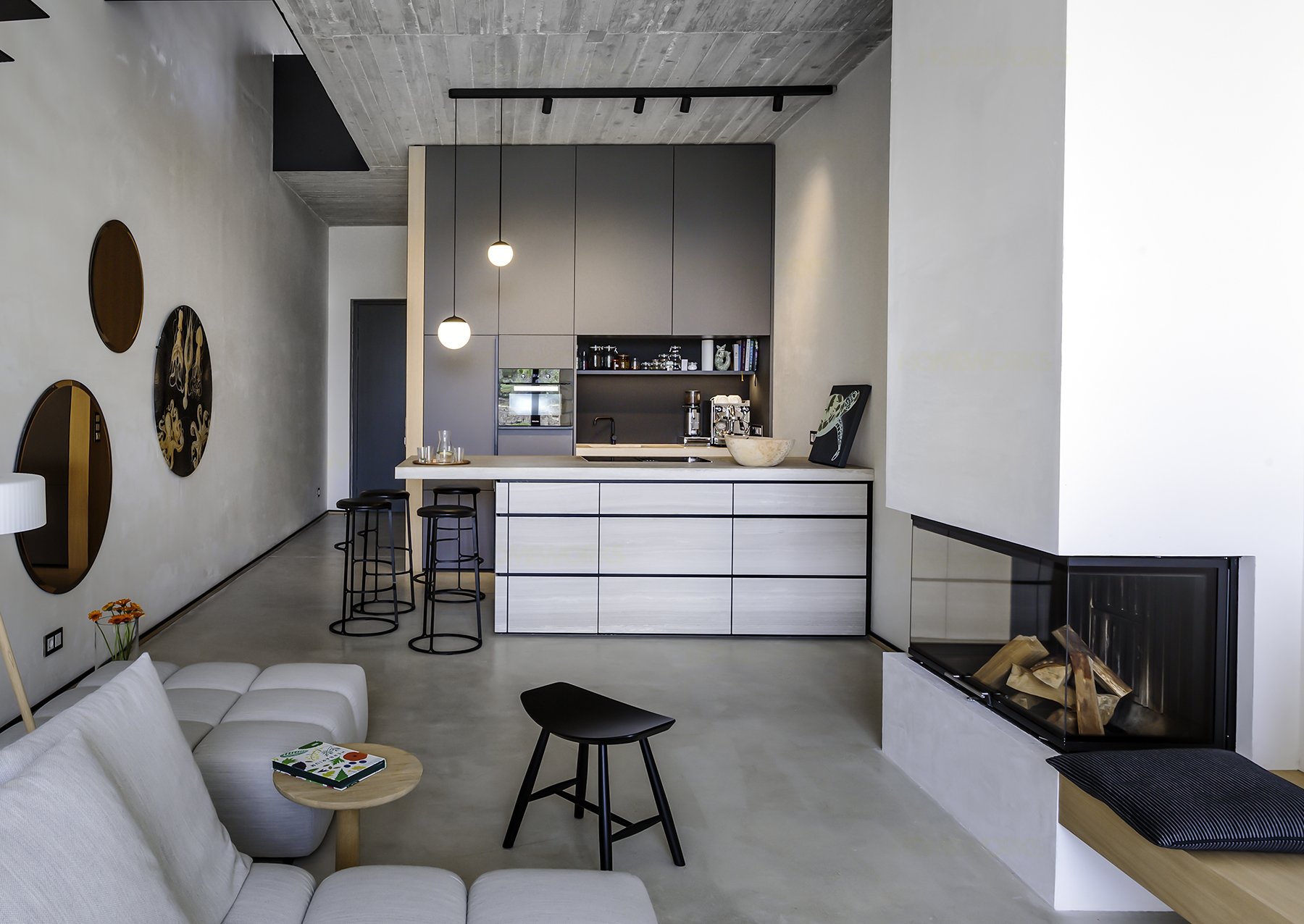 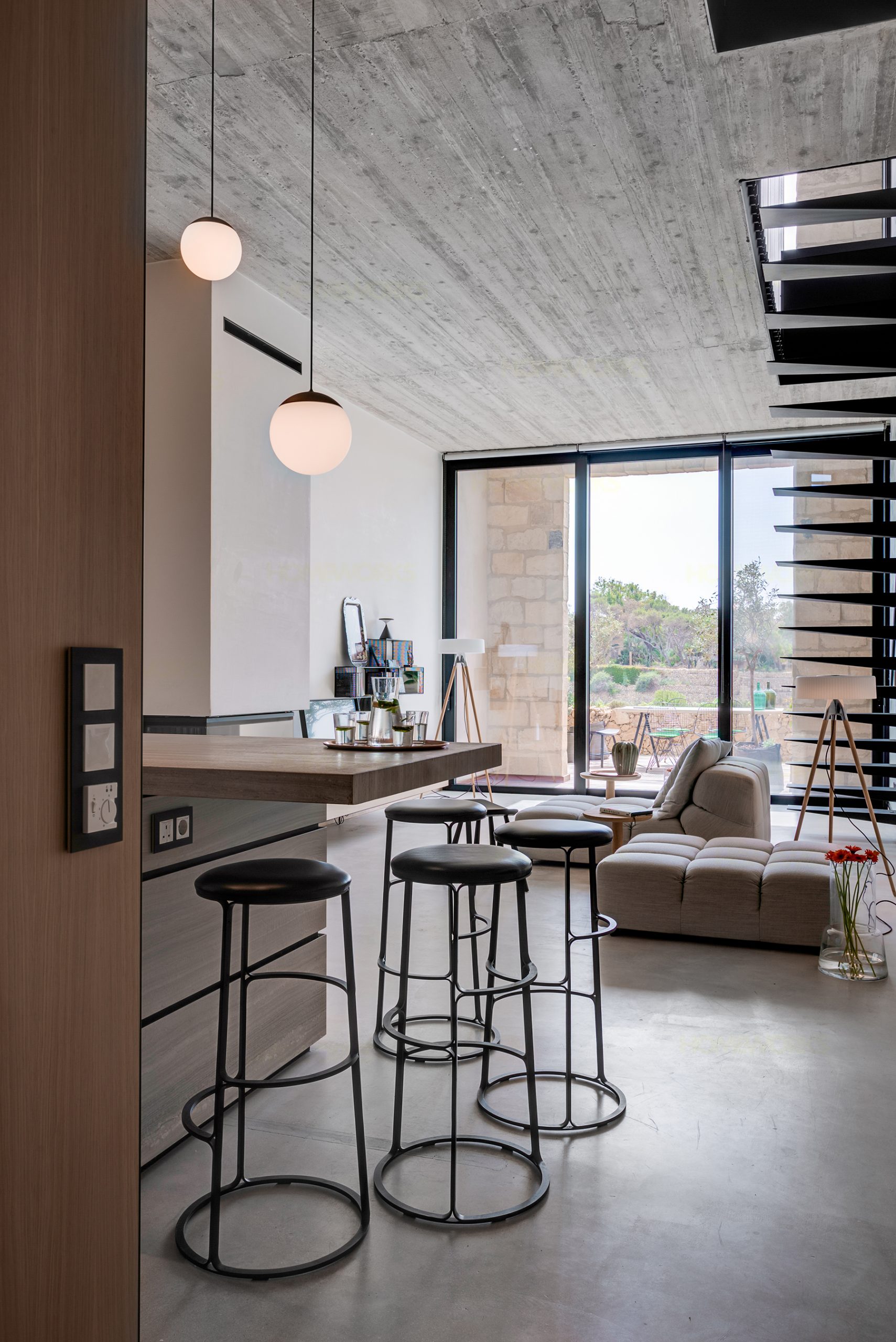 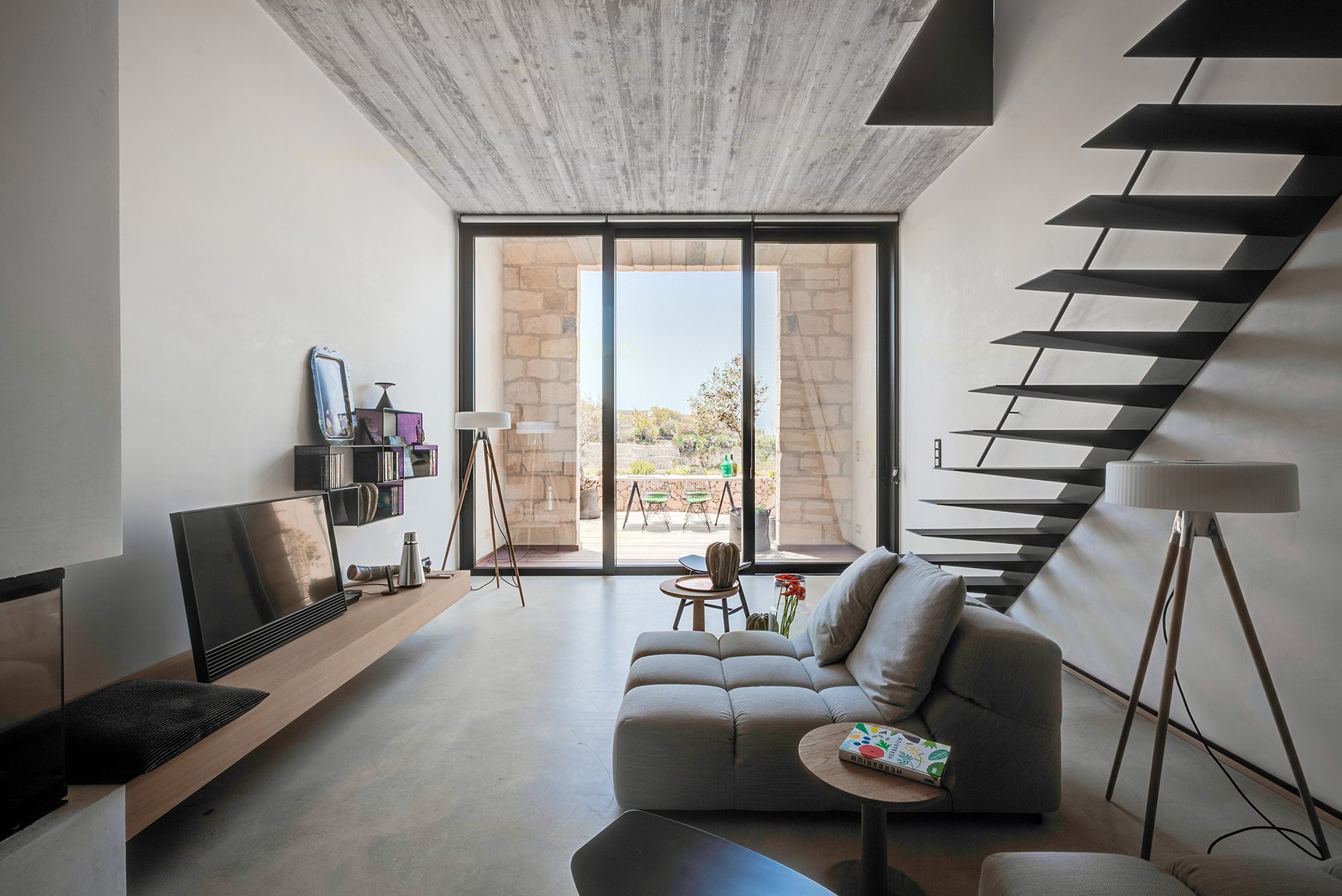 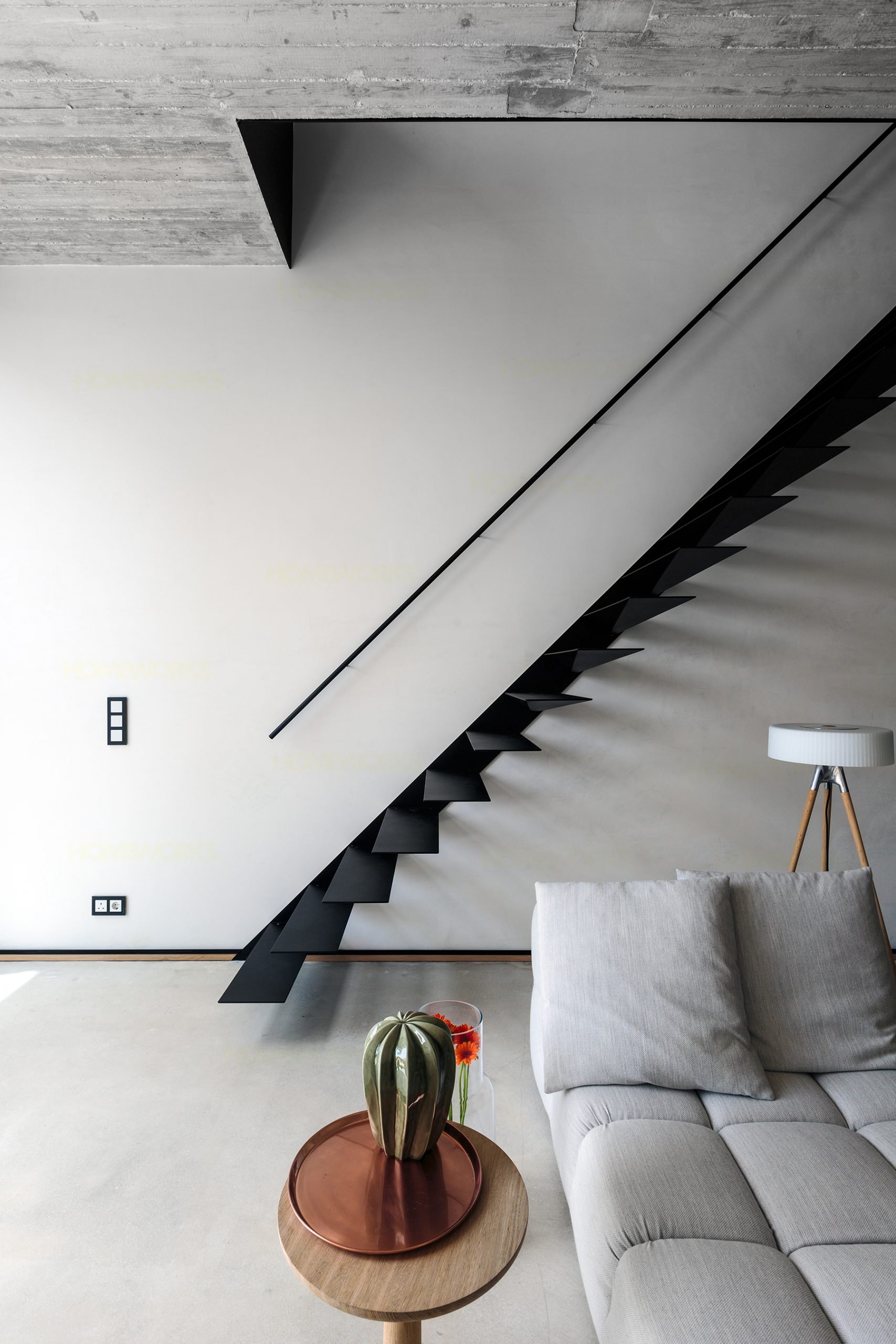 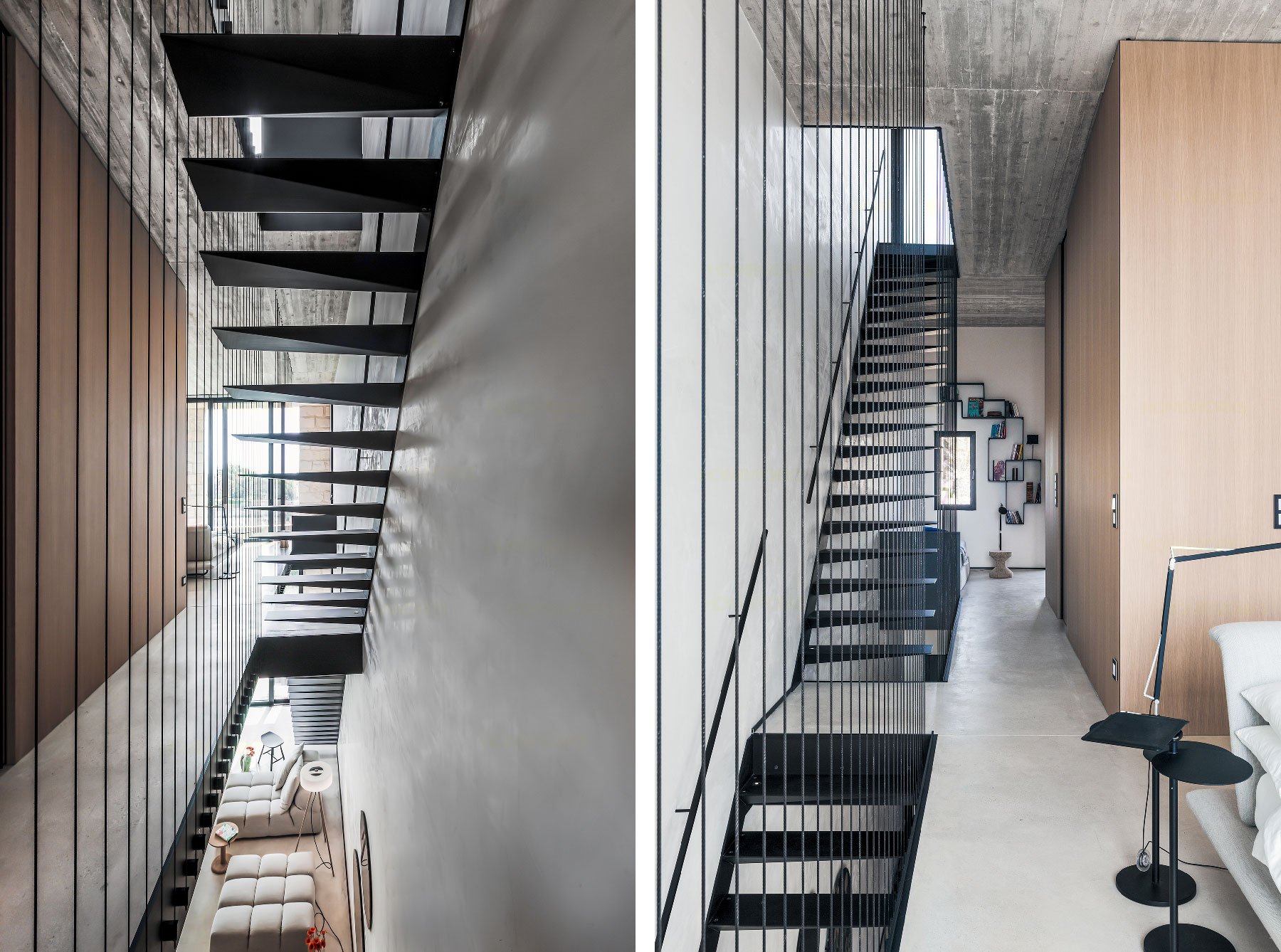 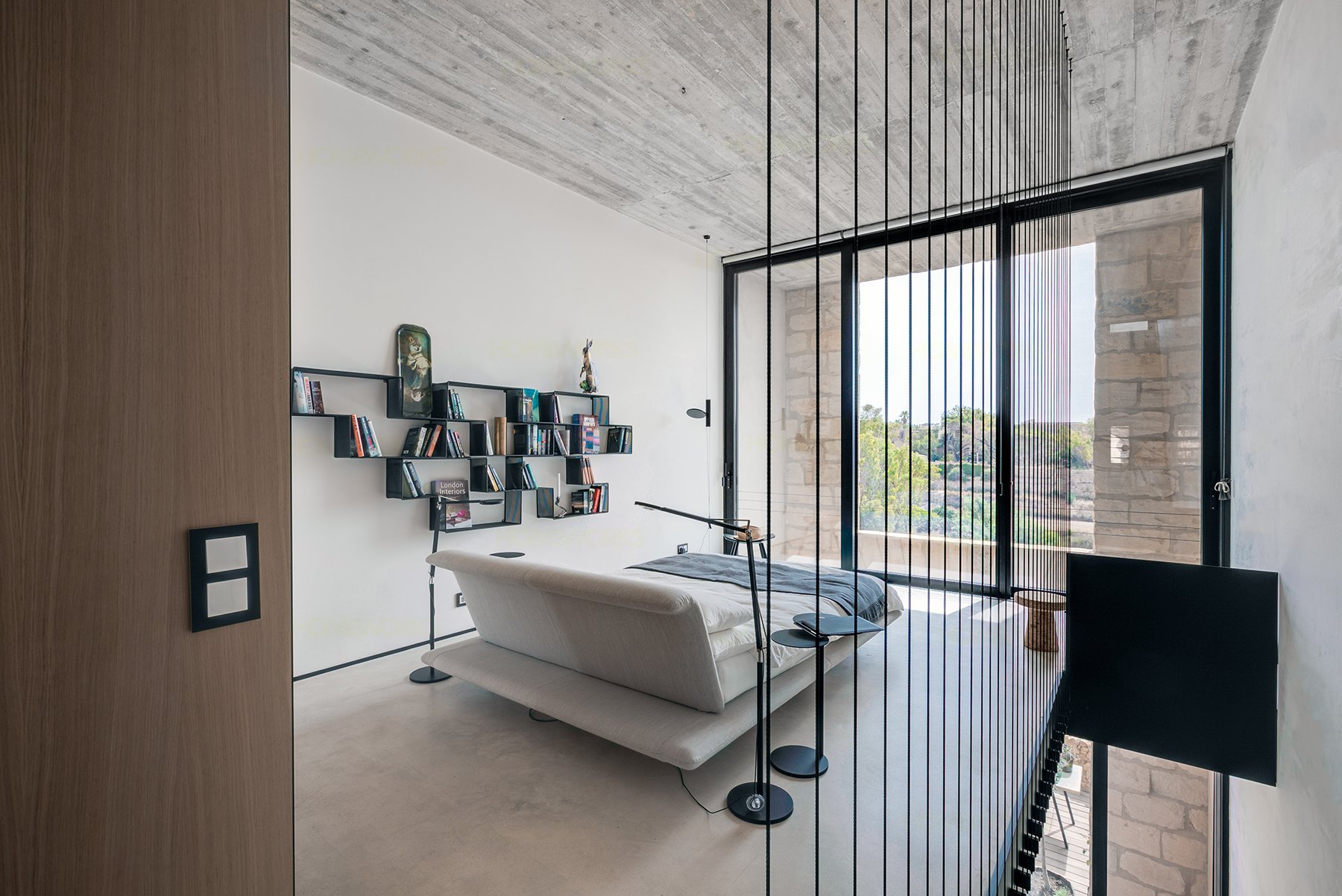 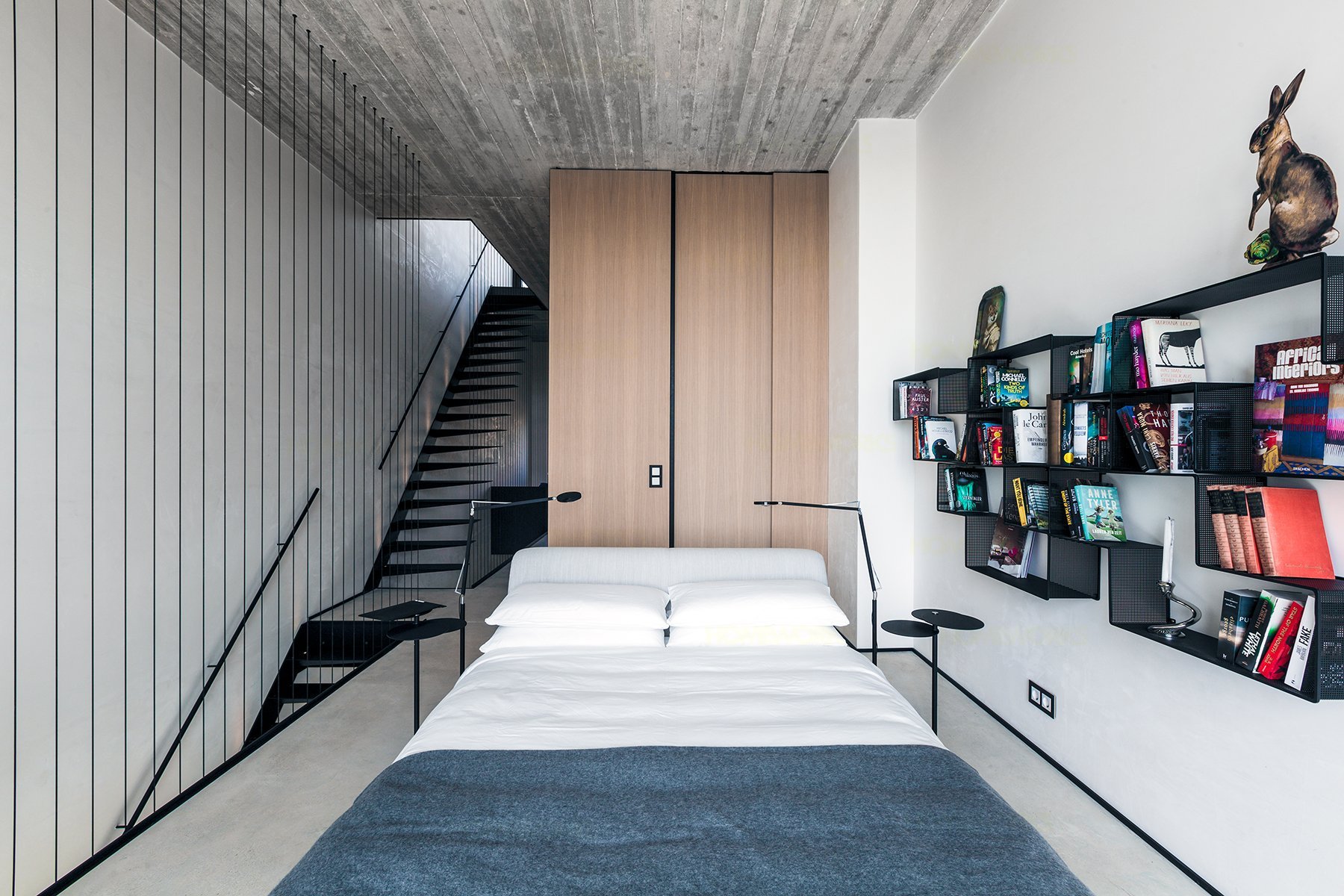 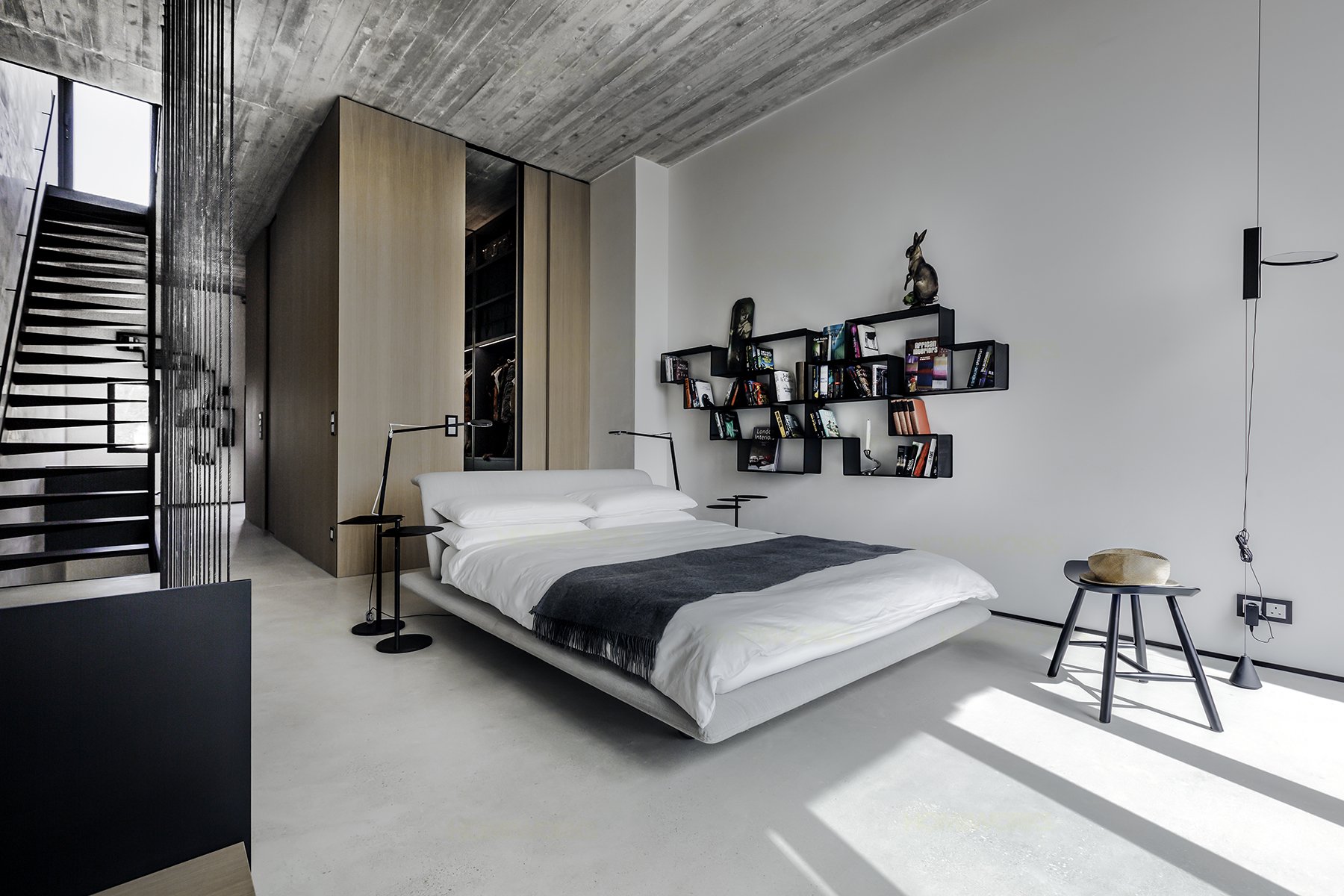 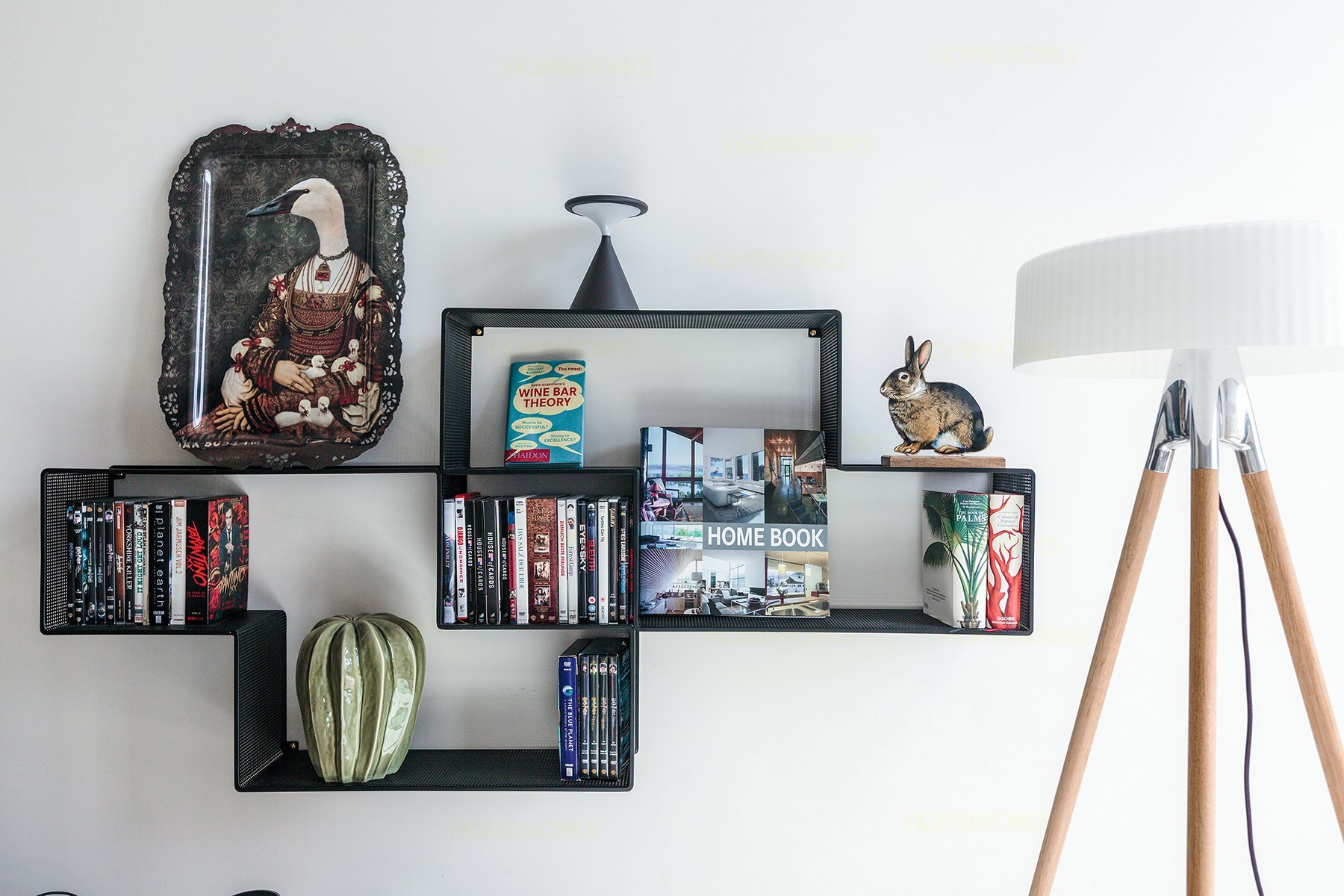 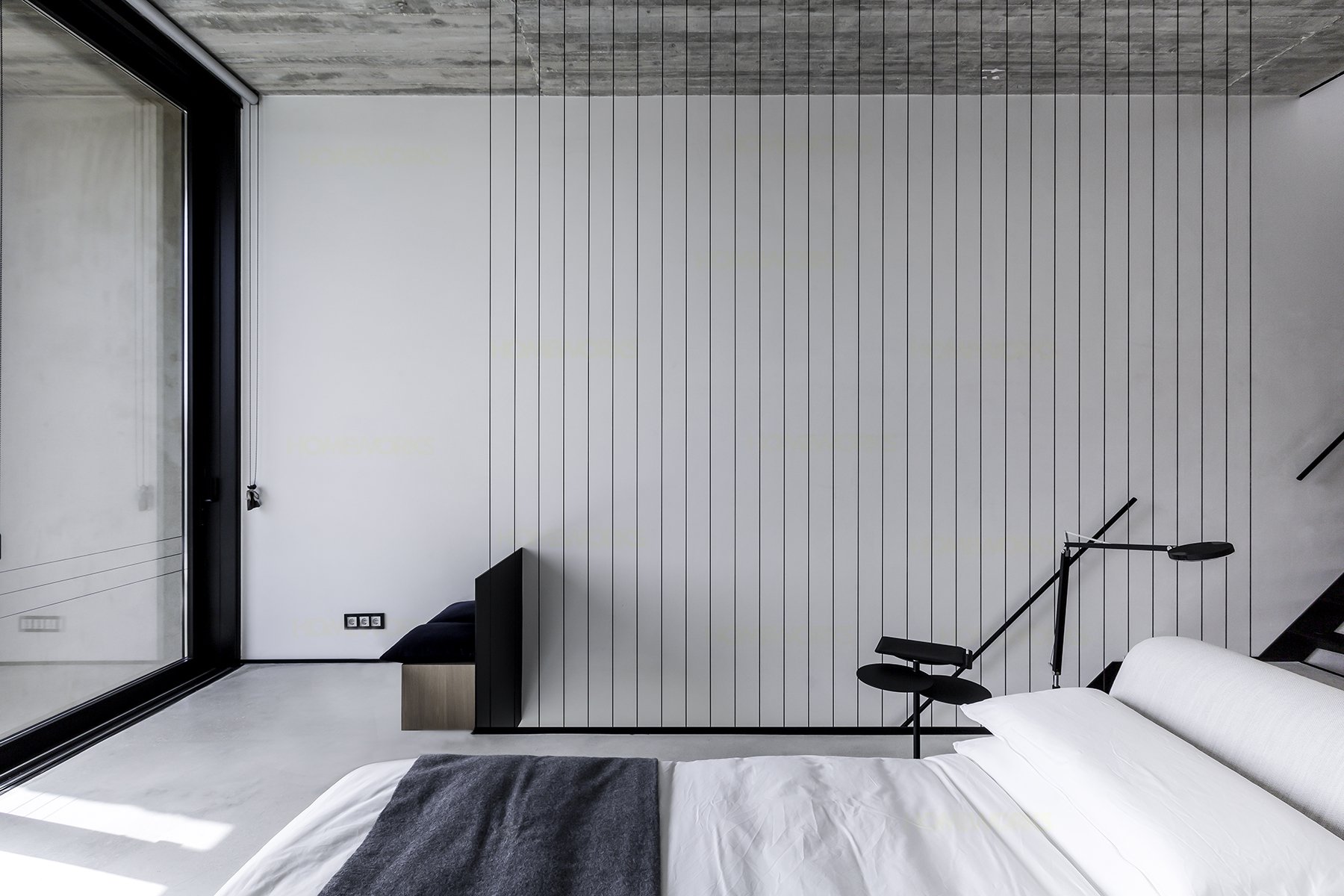 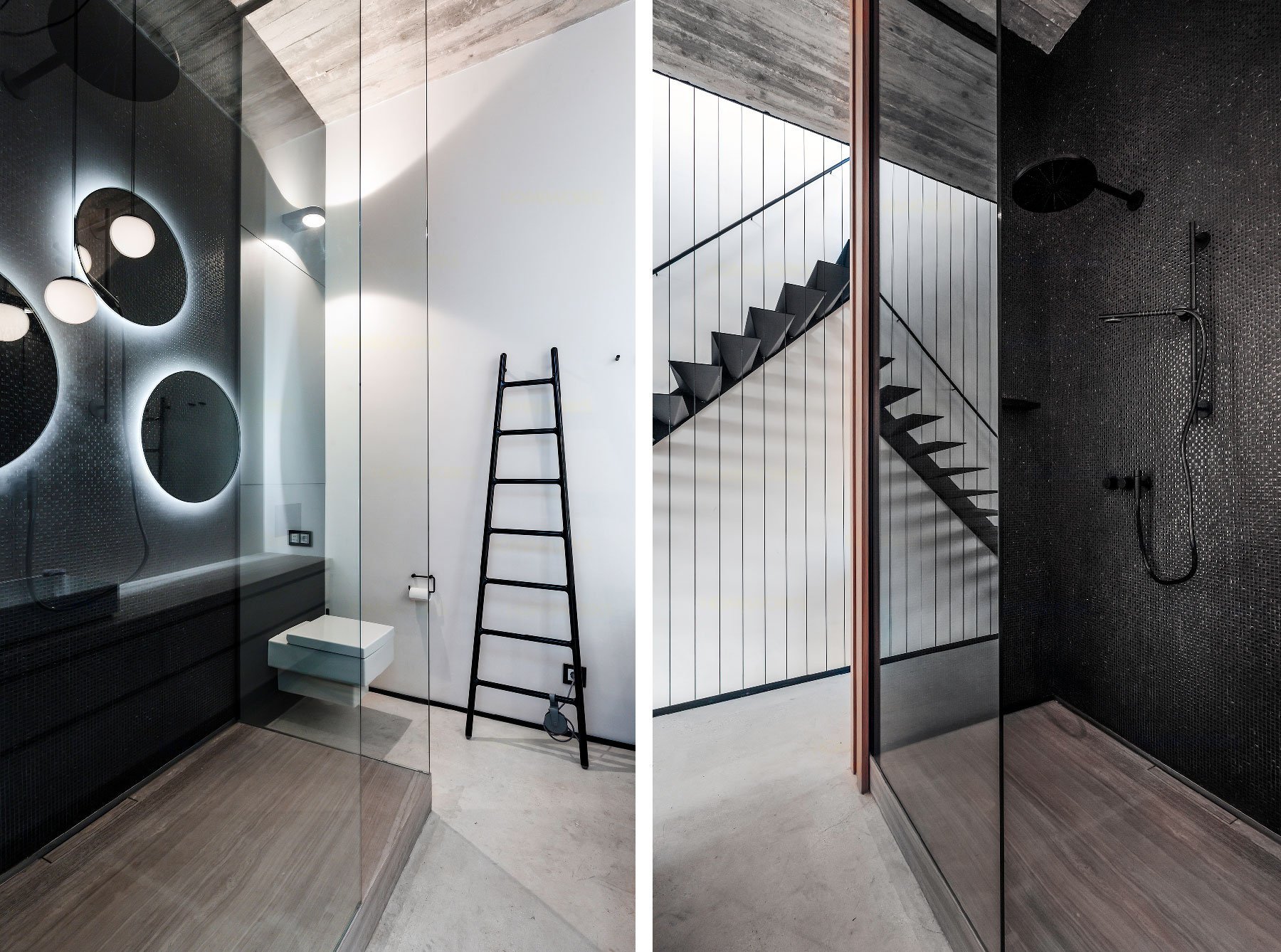 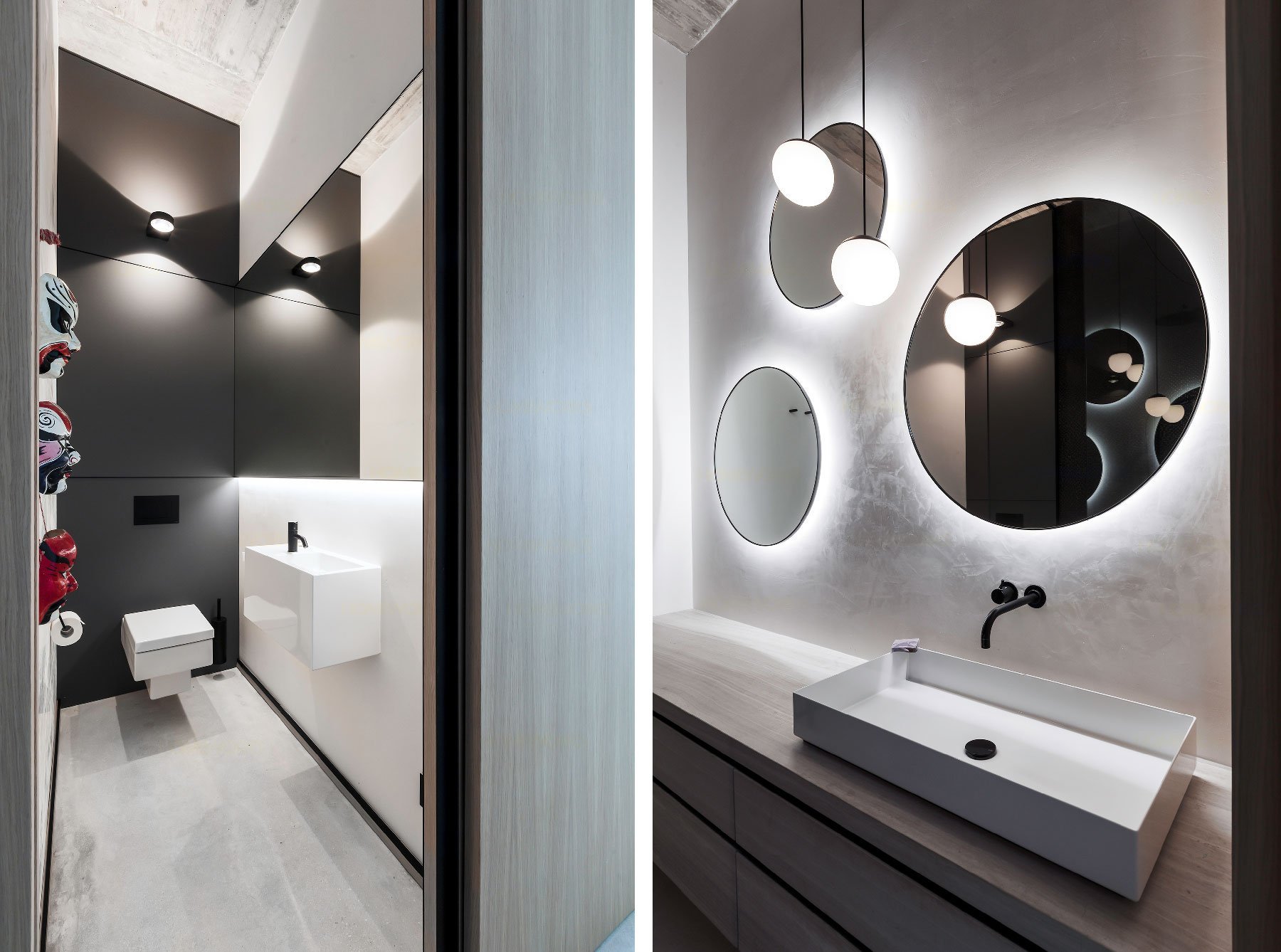 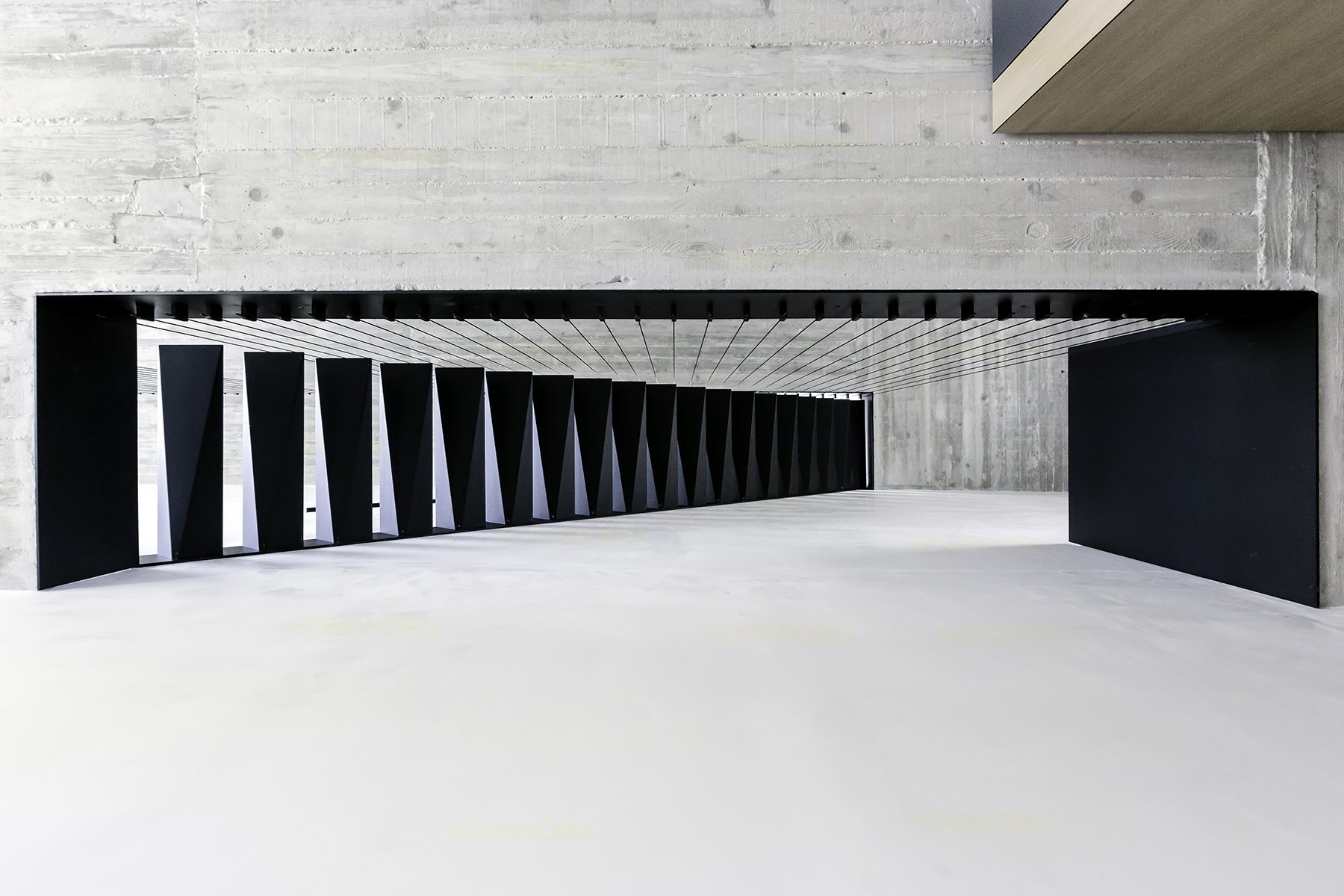 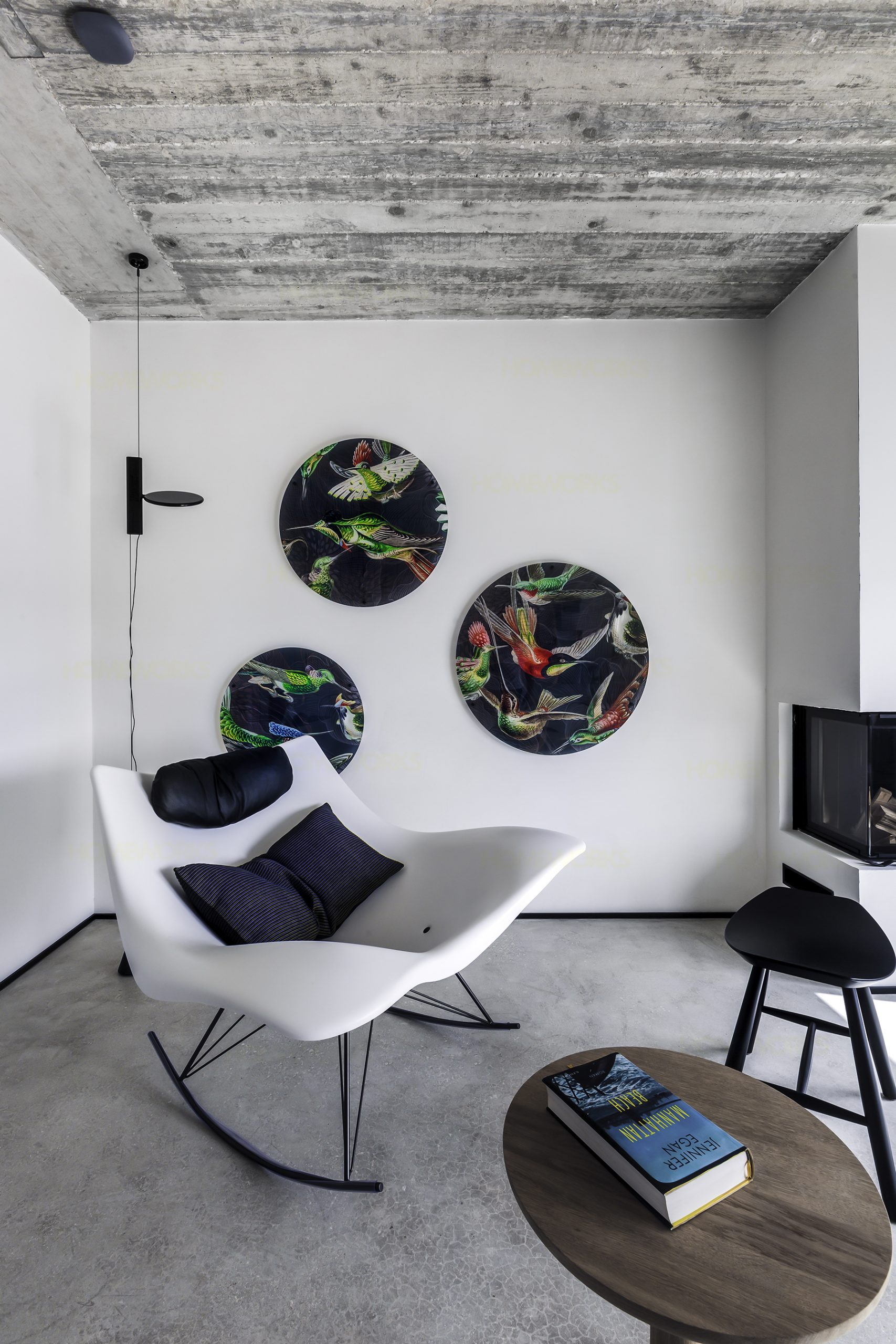 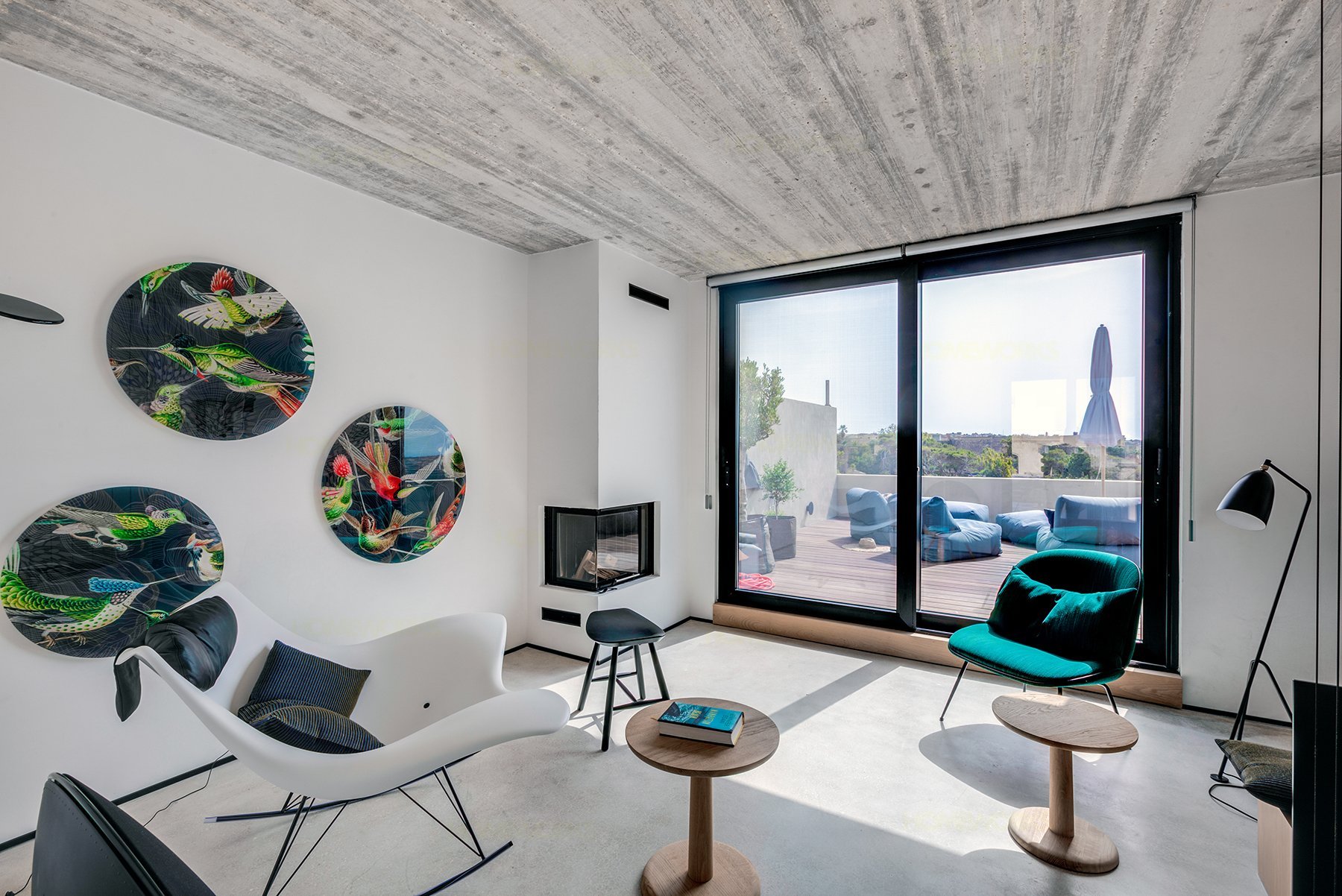