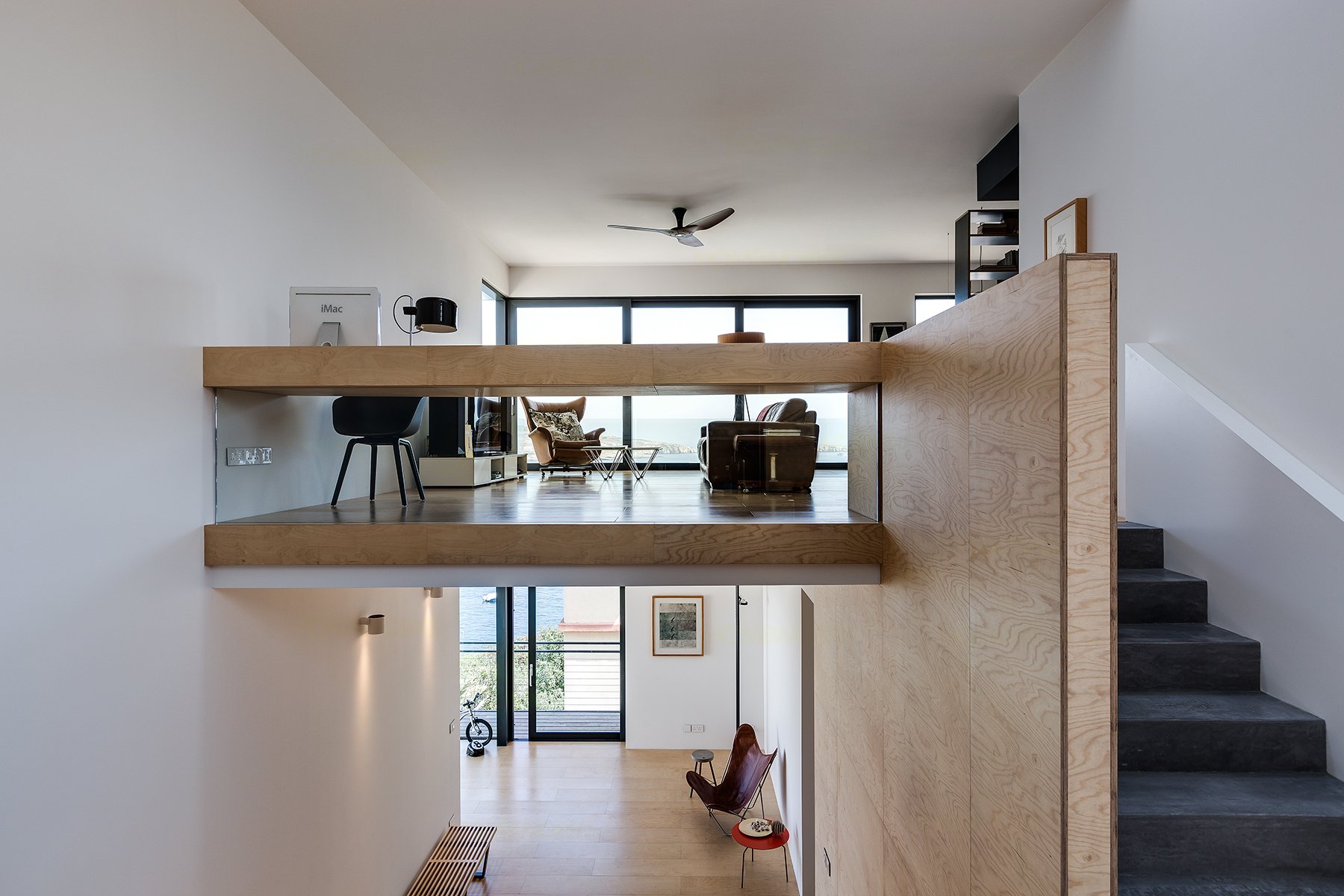 “When we acquired the house, the prospect of converting a 1970’s house, close to the sea, overlooking a private garden, and having its own roof terrace was exhilarating. We knew from the outset that this was going to be our architectural playground,” Architect Christopher Micallef begins.

Originally forming part of a traditional 1970’s modernist house, this home is located on the first-floor level. The internal arrangement was set over several rooms consisting of a kitchen, living and dining area at the entrance with three bedrooms at the back. All the rooms were planned on a single floor with a small roof room at roof level.

“Before attempting any designs, we settled in with no structural changes. That gave us time to discover and absorb the house’s main attributes, as well as to develop a site-specific brief designed around the rituals of our everyday life.”

A few years later, after various sketches, thoughts and ideas, the architects closed in on their final ideas. The brief they developed outlined the need for some additional living space: a larger kitchen (central in its location), a small courtyard (which would allow the family to make use of the external space in summer, as well as in winter), keep the number of bedrooms to three, and finally – open up unimpeded views of the sea and garden below, simultaneously introducing environmental solutions to avoid heat gains in summer and maximise on the air circulation from the sea breeze below.

“From an architectural standpoint, the extension was also to be seen as a physical expression of our personal thoughts and ideas. The transformation was to be bold in its volumetric expression, playful in its light movement, precise in its choice of materials, contextual, honest, and respectful of the fact that the house is an extension to a 1970’s modernist building.”
The initial challenge was to design an extension that worked around how the family lived while respecting the original building facade’s architectural expression.

The new arrangement opens a sense of discovery through the three levels of the house. Now, the private quarters are located on the first floor. In contrast, the living quarters are stepped upwards from the family theatre at the entrance level to the kitchen, living and dining areas at various levels above.

An external courtyard was tucked in next to the kitchen. This serves as an external herb garden and allows for enjoyment of the south-facing daylight as it floods the courtyard throughout the day. Internally, the light is balanced with a series of north-facing windows, including a high-level window at roof level separating the roof terrace from the kitchen below.

The kitchen was the point of departure: “At the outset, we had some standard kitchens, which we thought complimented the overall design. In the end, however, we decided to move away from the standard. This gave us the freedom to fit the designs and discover new possibilities through a creative design process.”

The architects picked up materials used throughout the house, including the birch plywood and concrete, while adding a few more, including leather, which they ended up using as handles for three of the kitchen drawers.

“This customisation and precision in detail ran through many other items, including the workbench that overlooks the kitchen from the living room, as well as the dining bench and the library unit. The integration of these pieces is an important aspect of the overall design of the house.”

The dialogue between the materials and internal spaces is evident throughout the house. As the roof angles itself upwards, the textures of concrete, steel, glass and birch plywood are married in a series of precise architectural gestures.

“In each of our design solutions, we worked around a simple notion – each space was to feel comfortable and right to us. In many ways, this home is a physical expression of our way of being.”

The new home arrangement opens a sense of discovery through the three levels of the house. The private quarters are located on the first floor. In contrast, the living quarters are stepped upwards from the family theatre at the entrance level to the kitchen, living and dining areas at various levels above

Living quarters, which are stepped upwards from the family theatre at the entrance level to the kitchen, living and dining areas at various levels above

The architects stayed true to the same materials throughout the house, such as birch plywood, concrete, and leather

A playful mix of black and natural wood makes for a tidy, minimalist look. A fixed dining bench saves on space, creating an informal setting

Looking down from the living area, the kitchen suspends itself between the two floors acting as a focal point in the house. A workbench makes good use of space, hinging itself atop the glass panels.

Designing a bespoke kitchen gave them the freedom to fit the designs they wanted, integrating the base materials used throughout their home

Left: Birch plywood is integrated into bespoke shelving and; Right: the wall separating the staircase

Left: A metal circular staircase leading to the roof level is cleverly fit into a tight space. Right: Pockets of light provide for even light throughout

A clever design creates a multi-function staircase: By isolating the steps to one side, the rest of the steps open up to being a design feature - not only doubling up as seating but also storage

Storage cupboards at the bottom of the steps

A bright corridor leading to the children's room 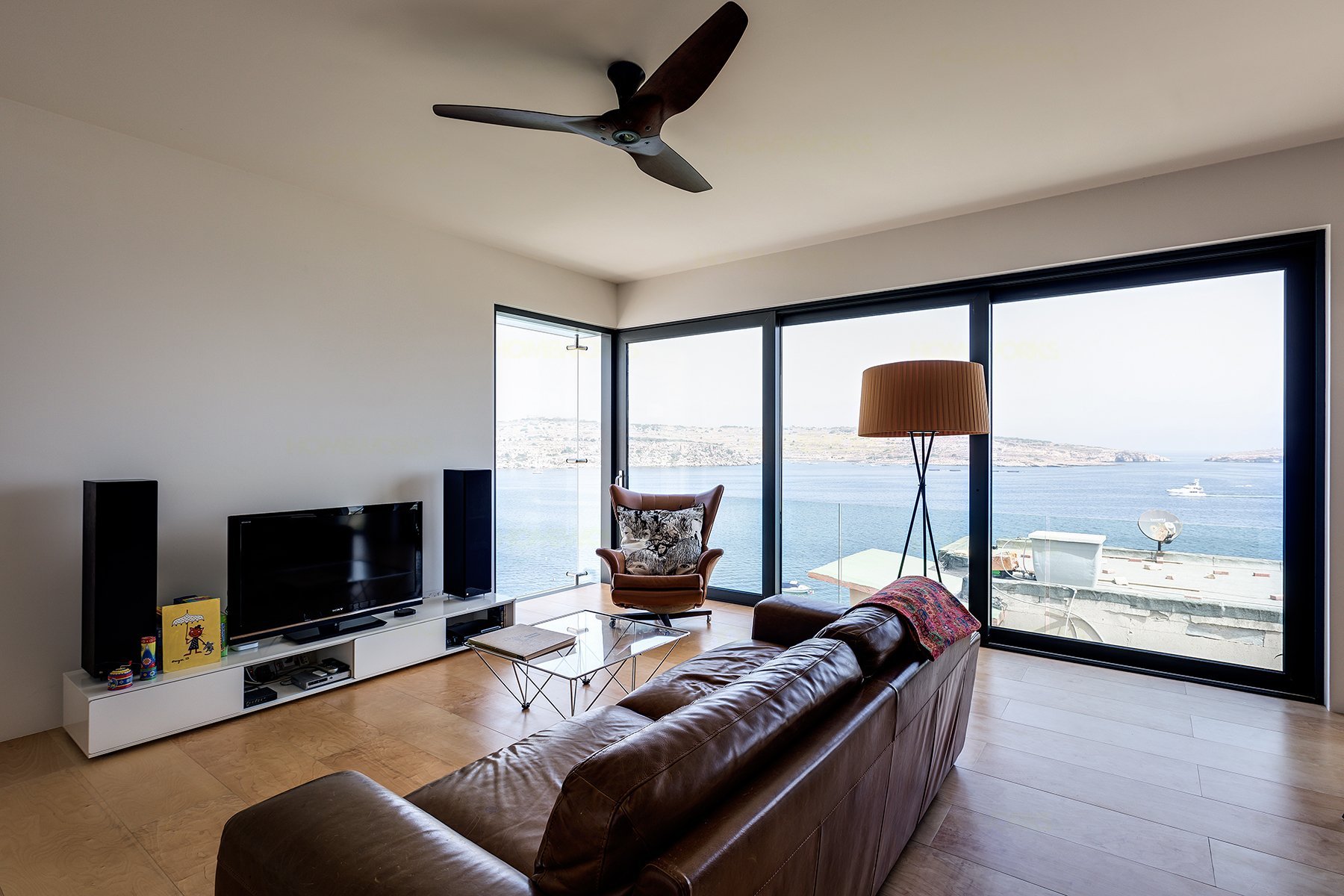 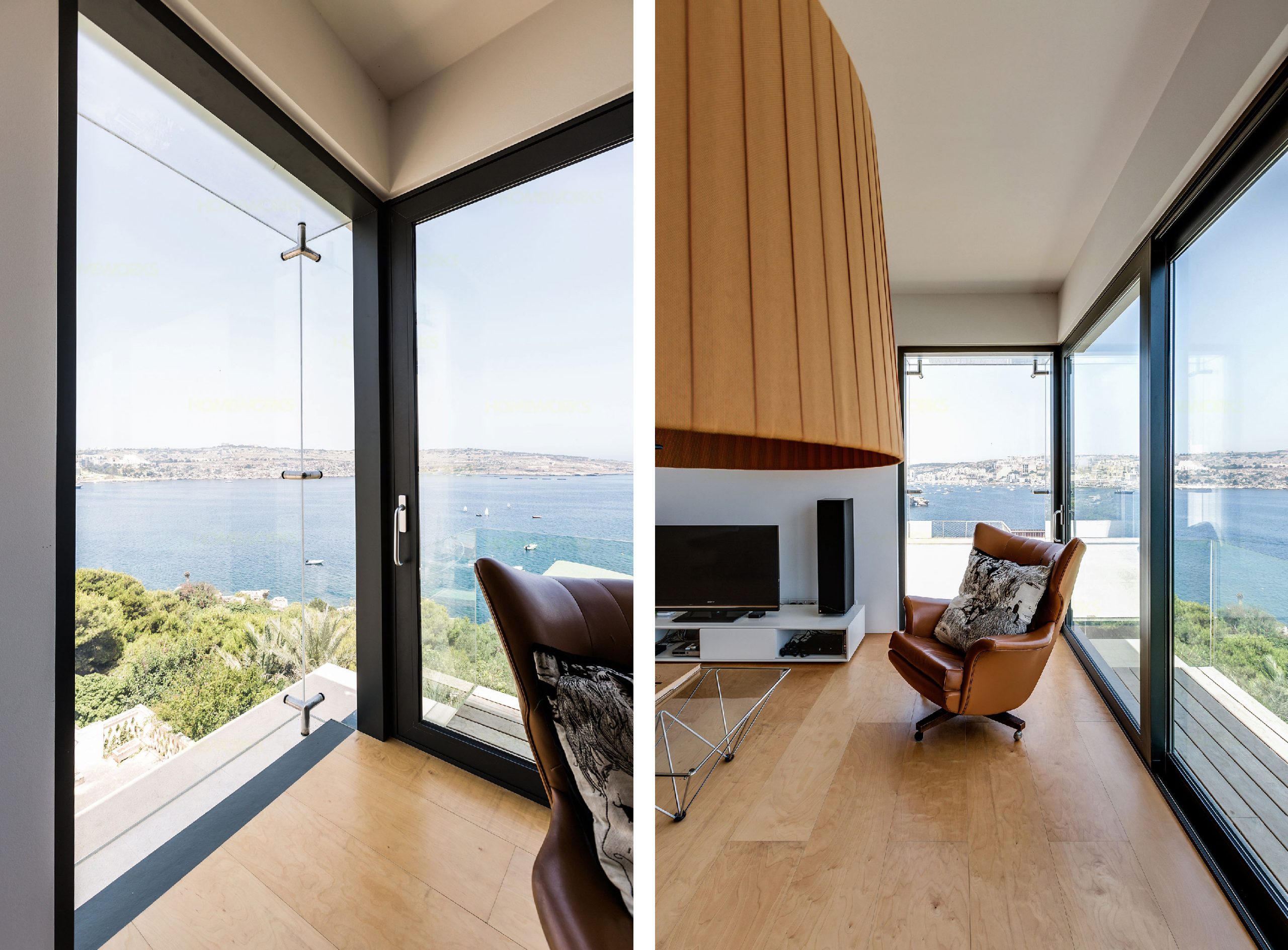 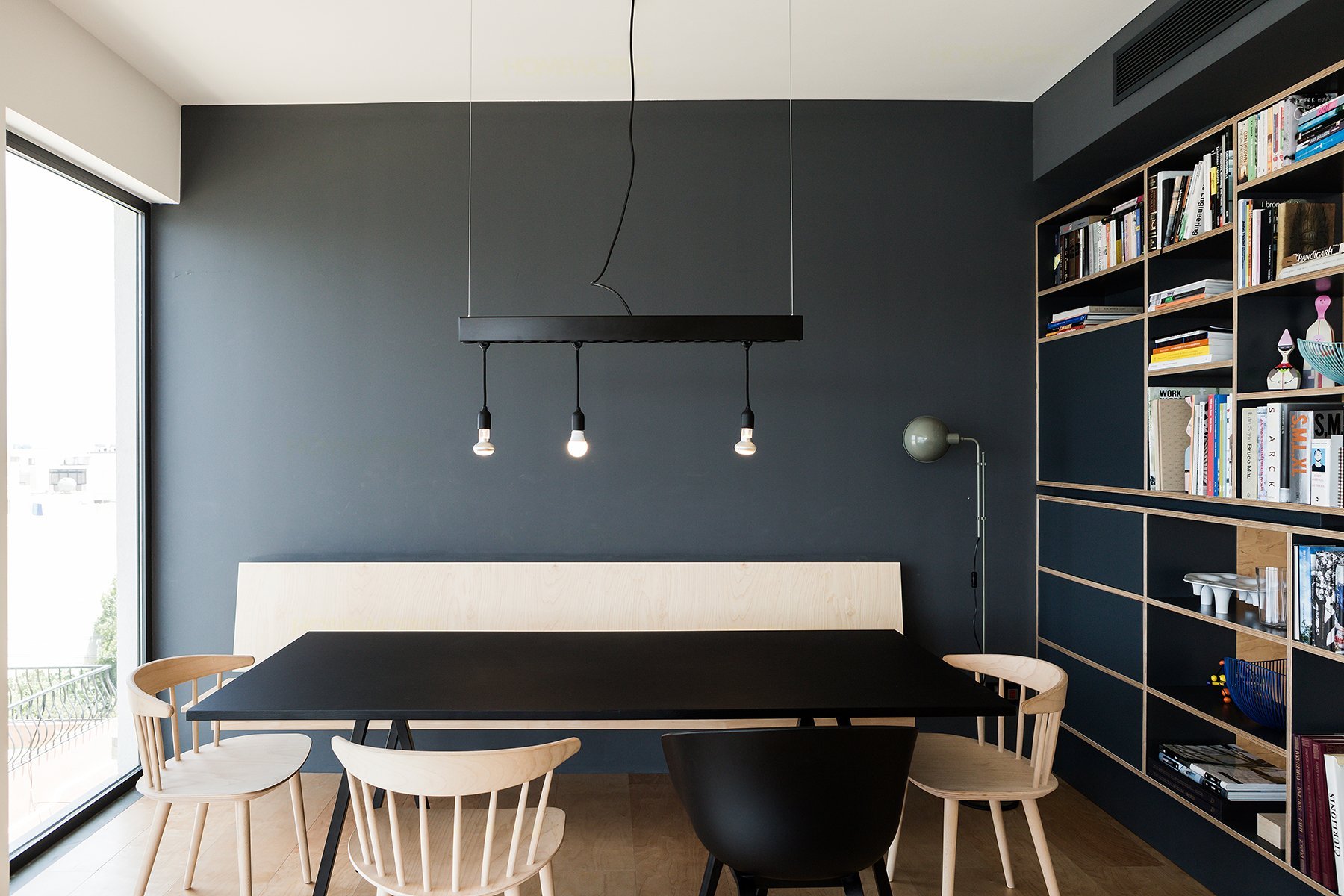 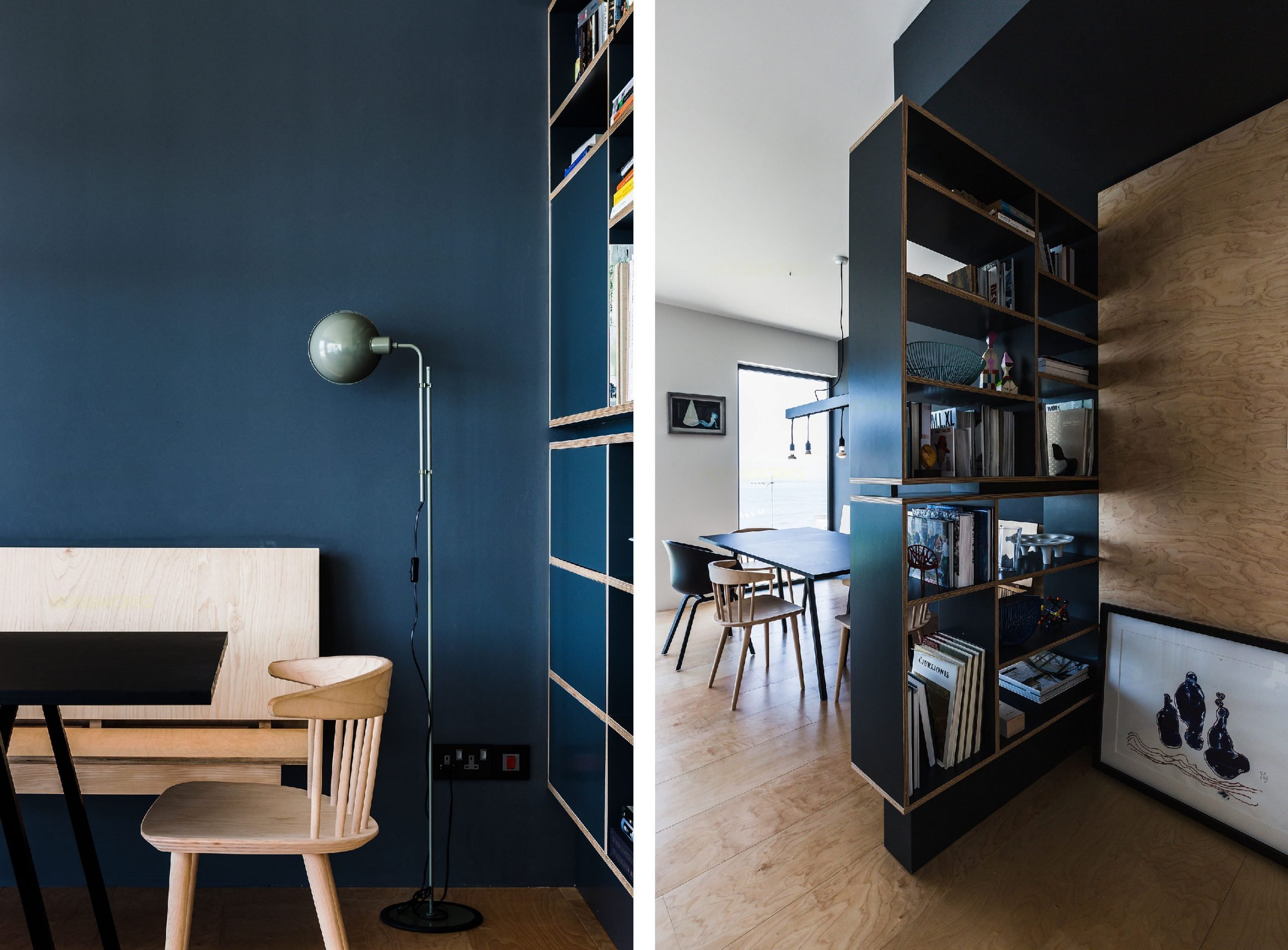 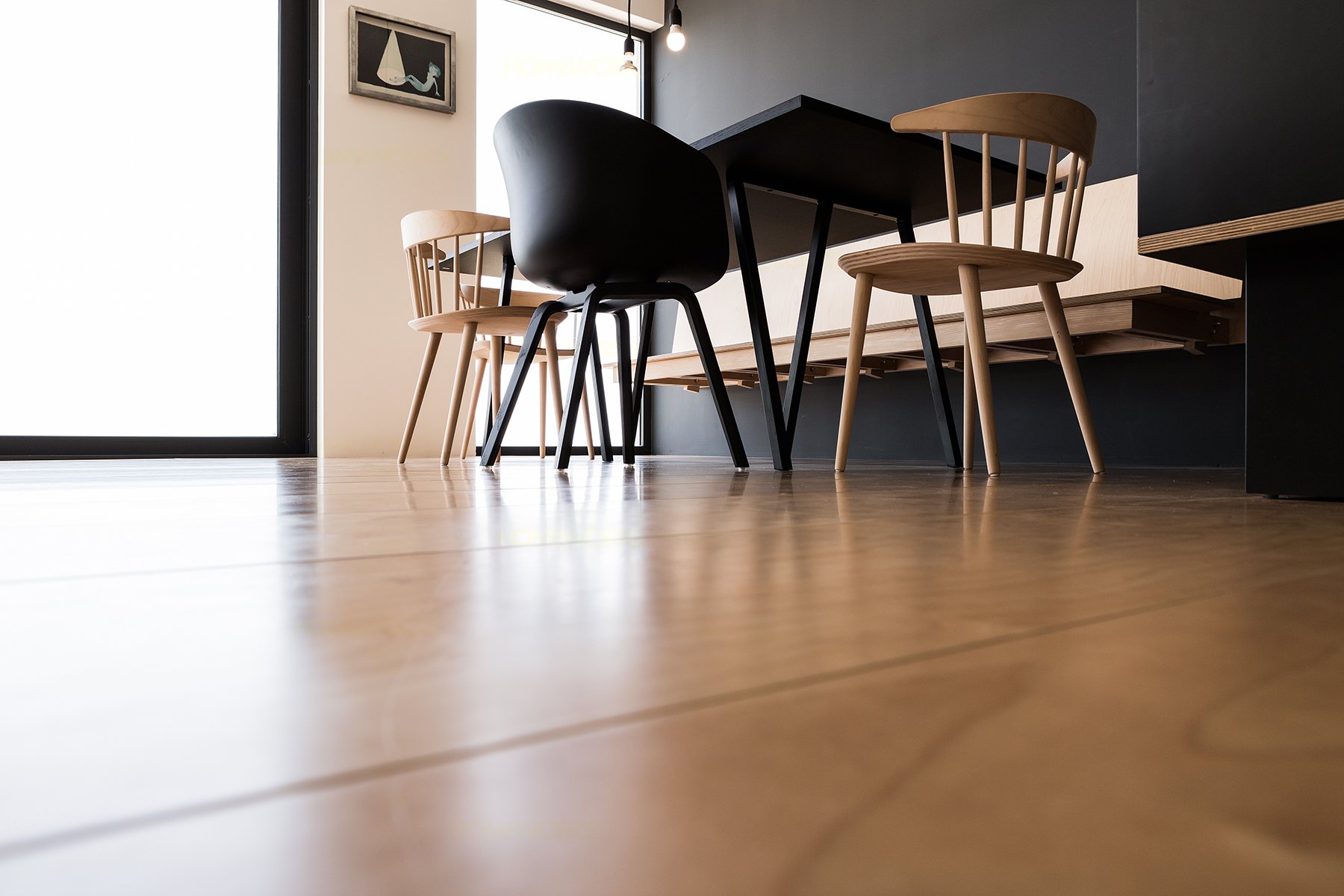 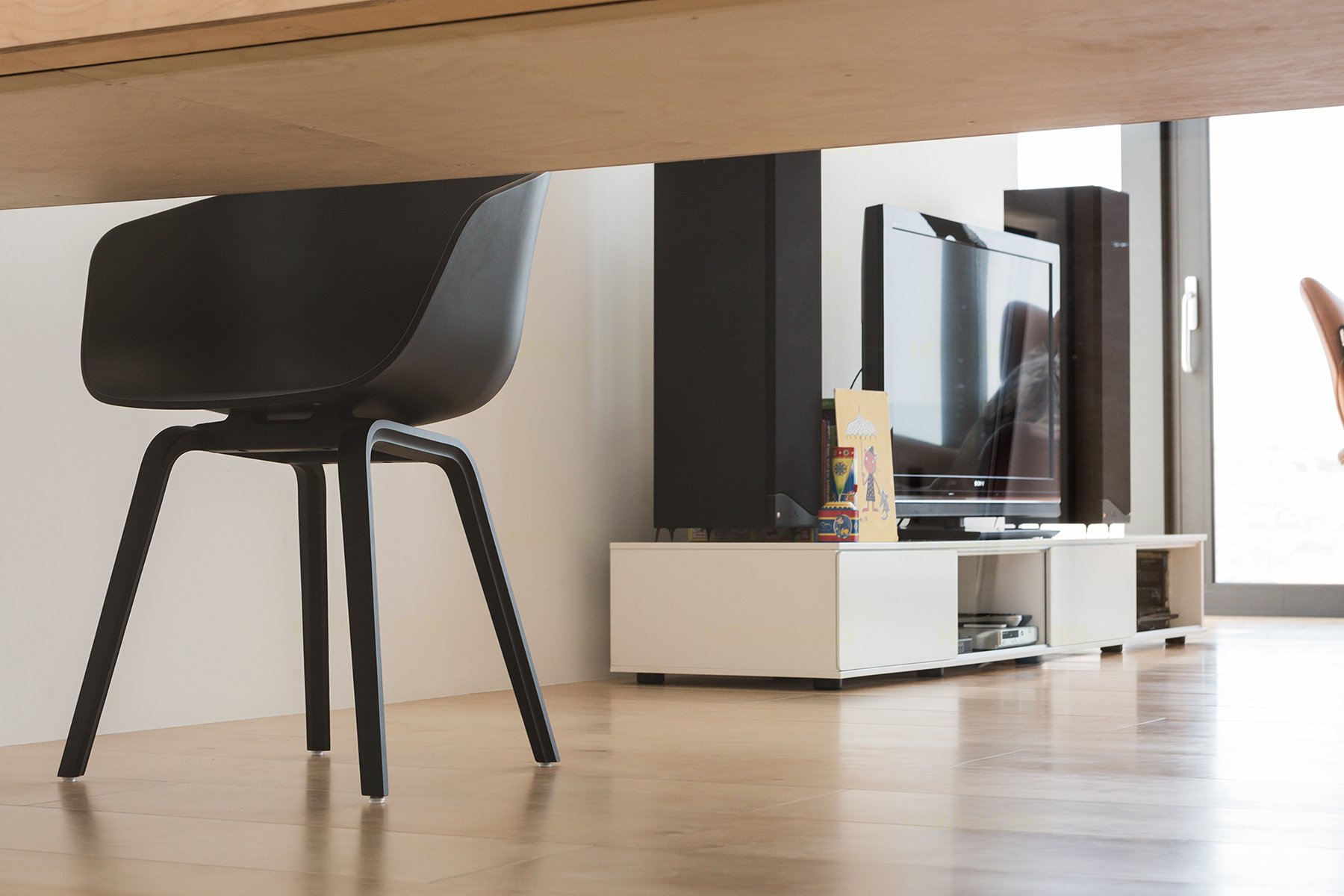 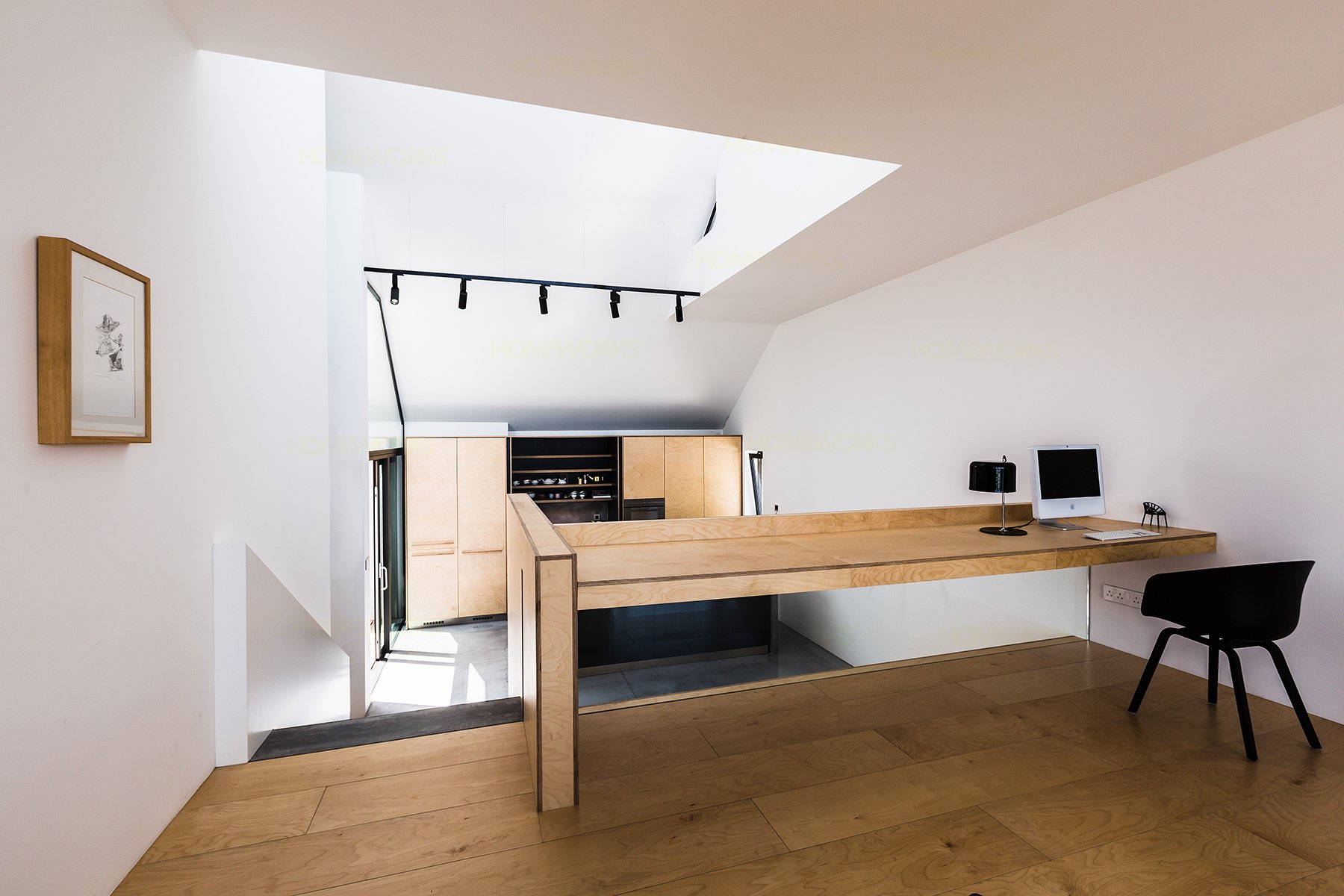 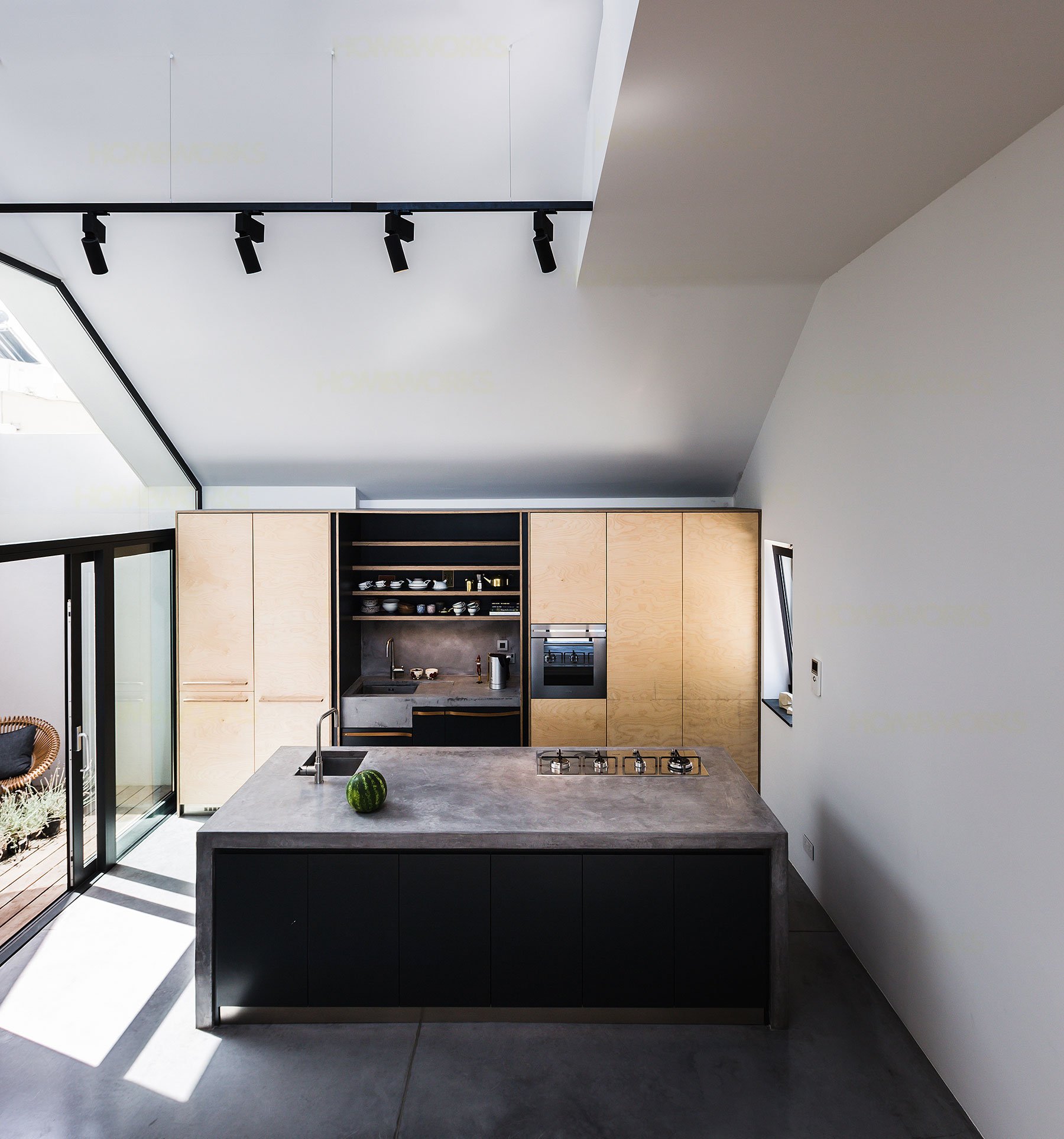 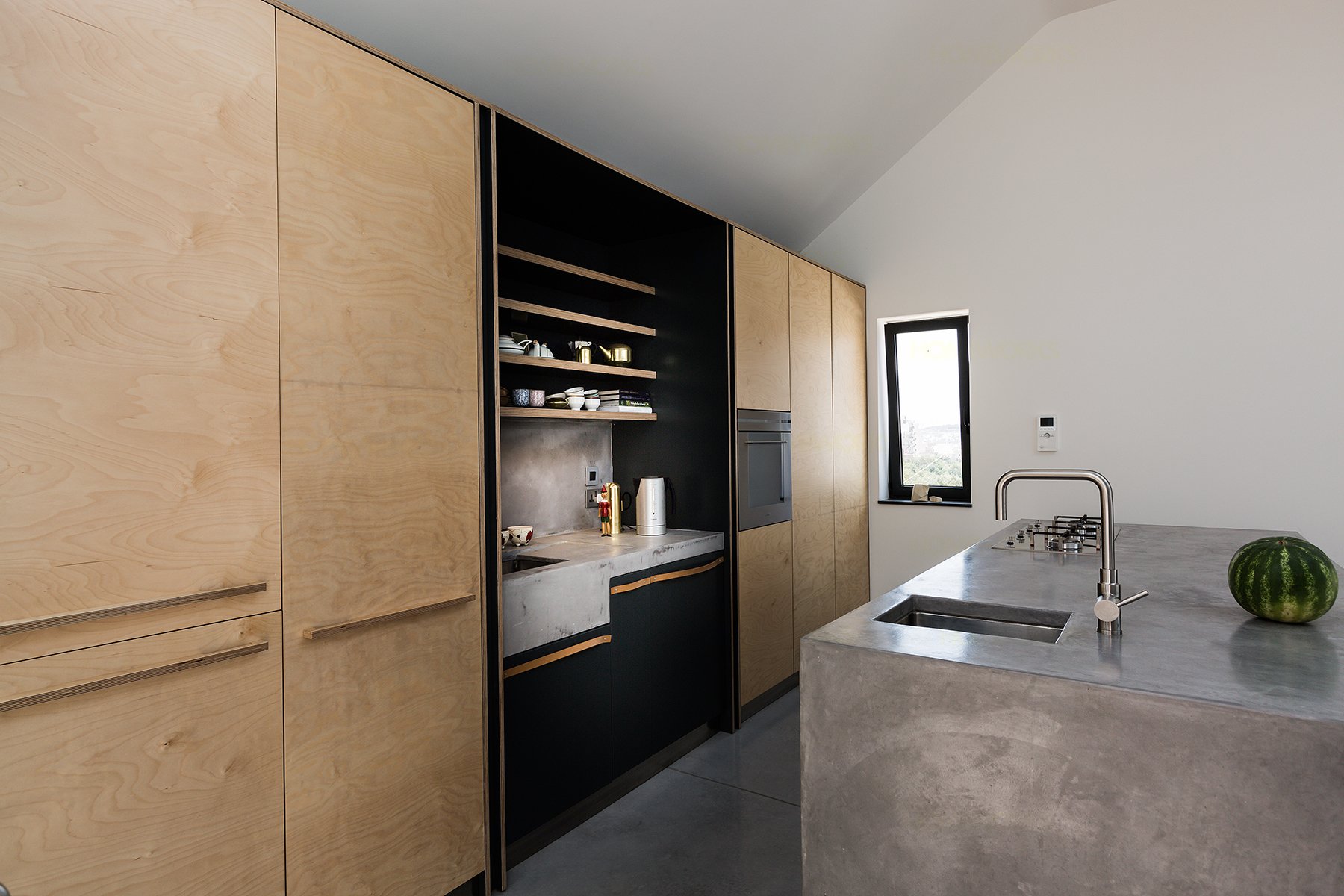 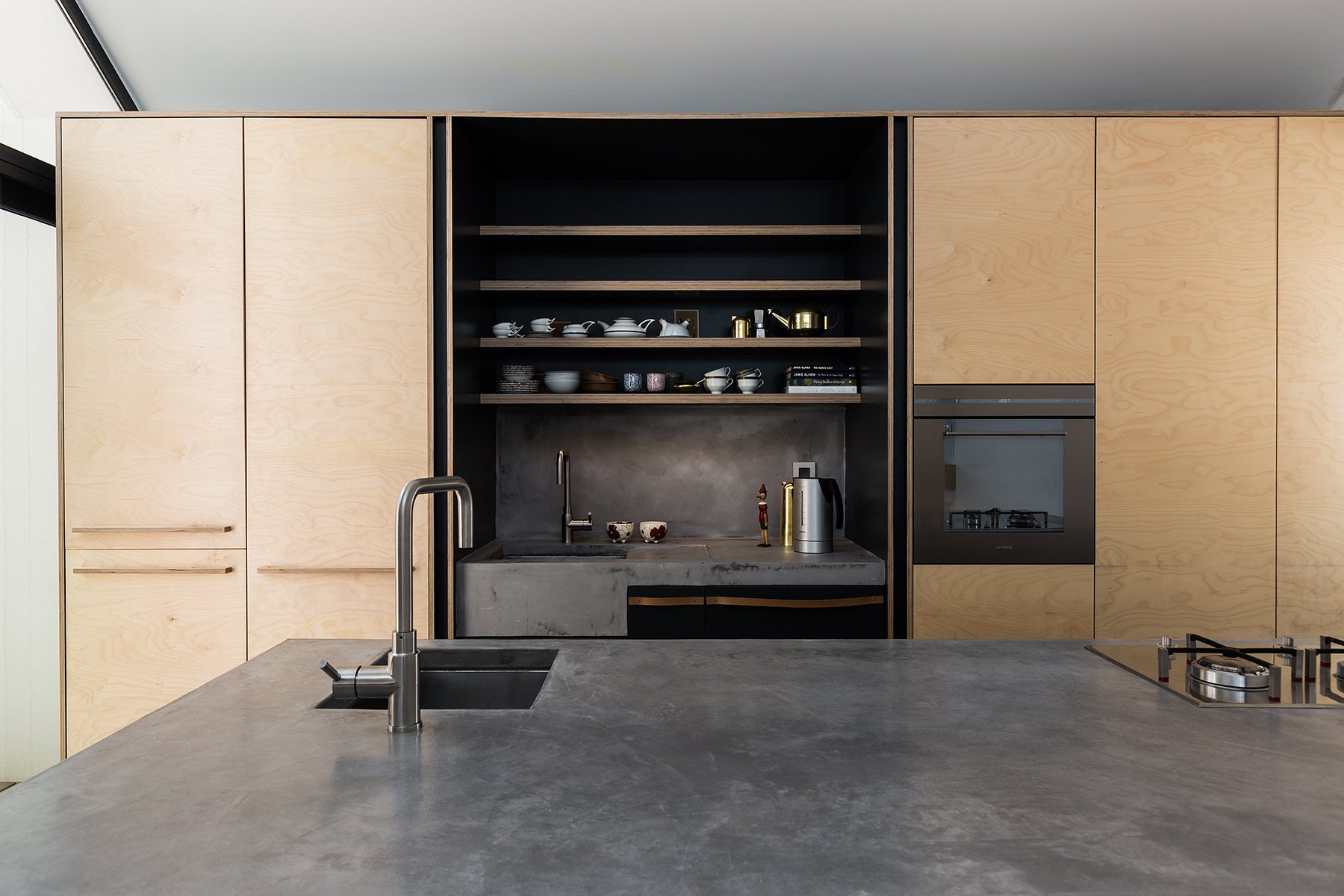 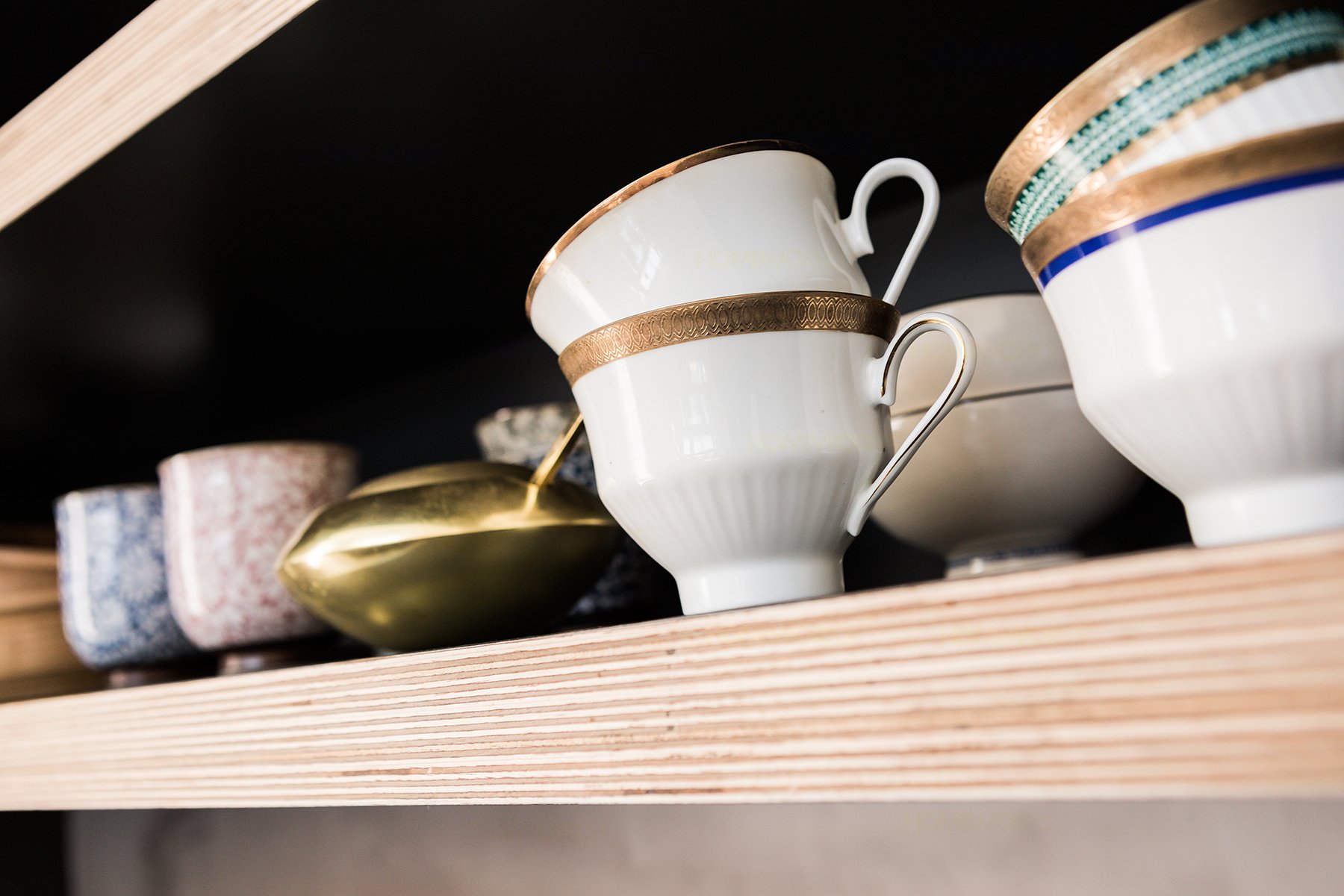 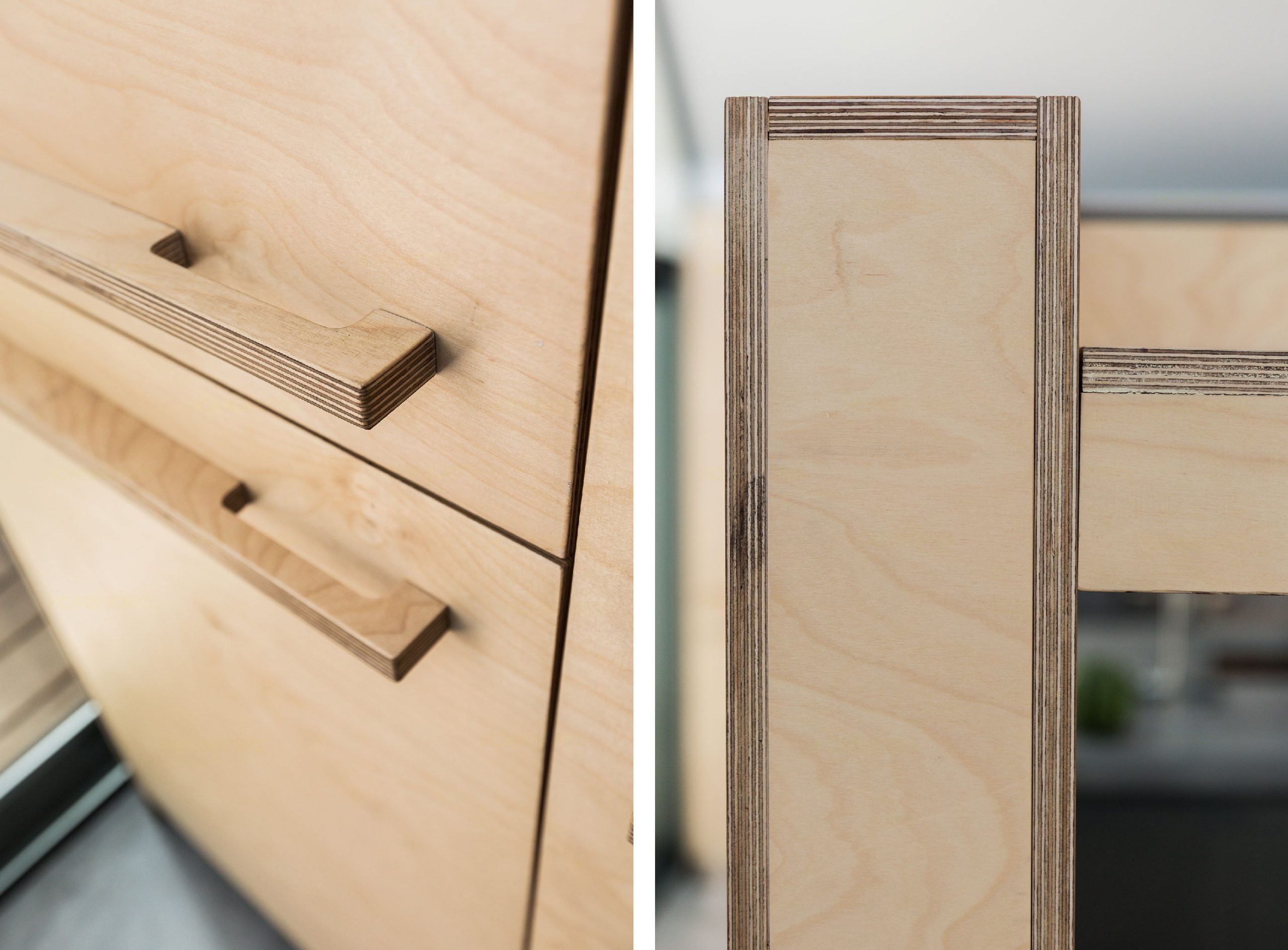 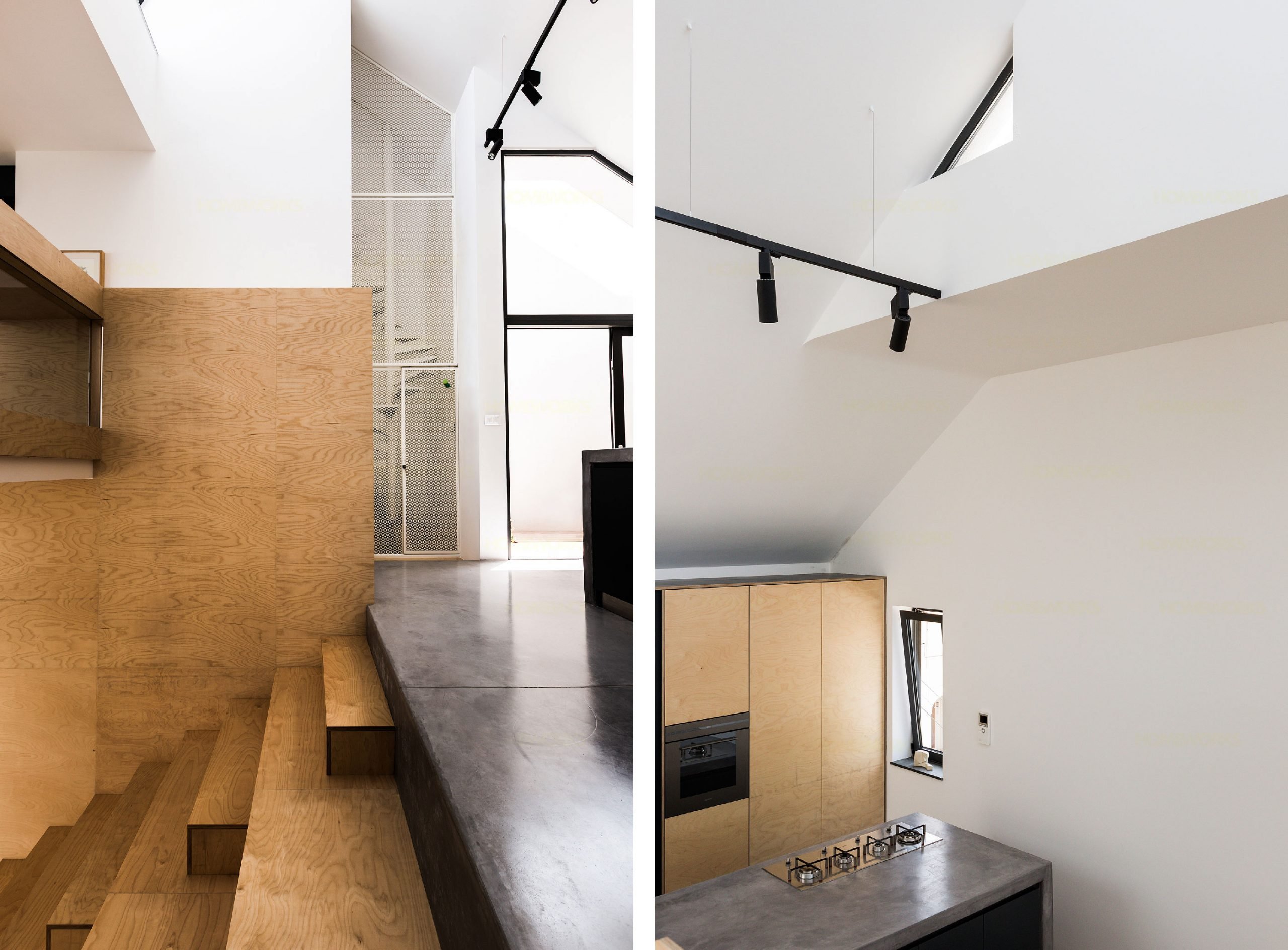 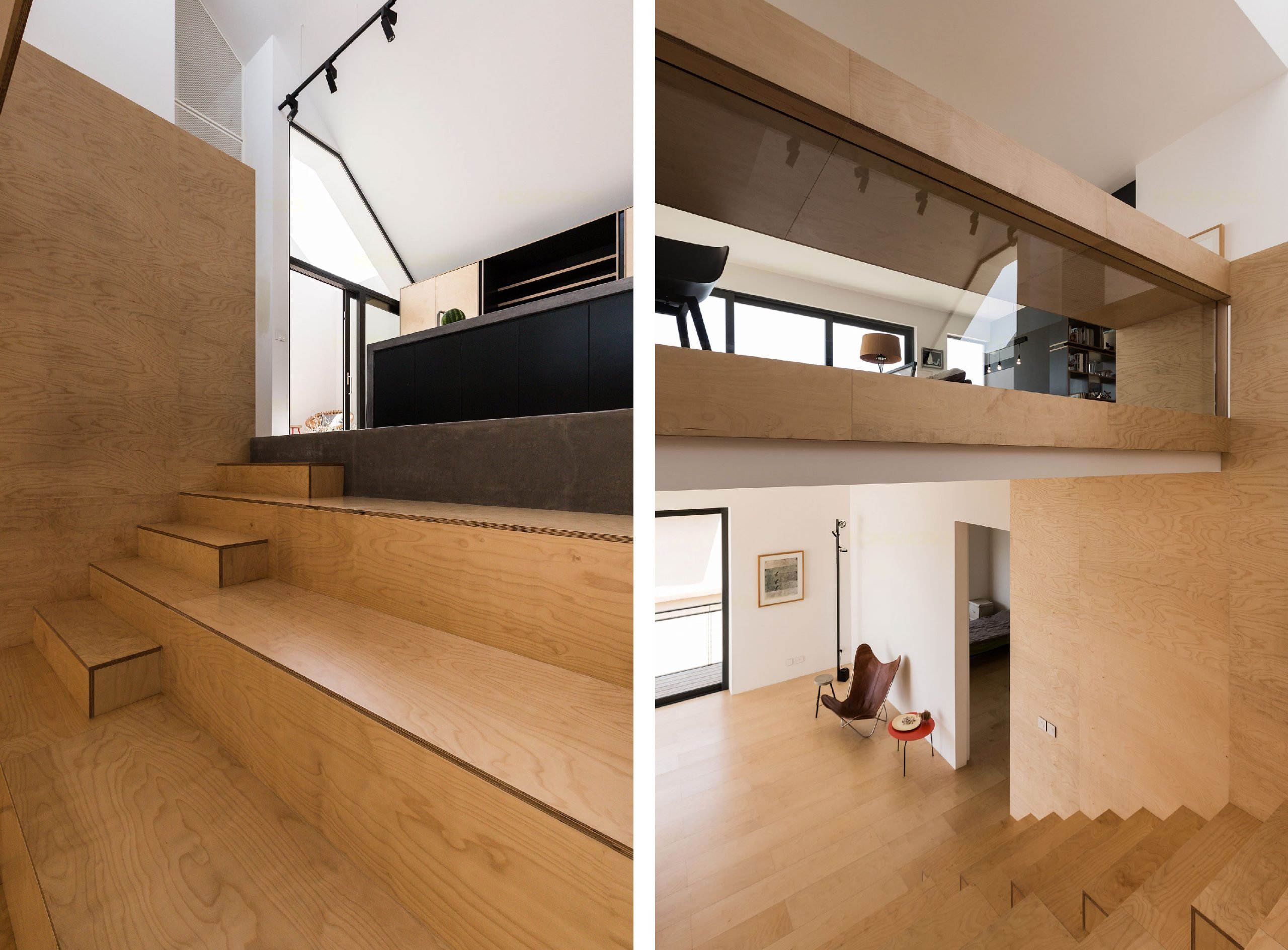 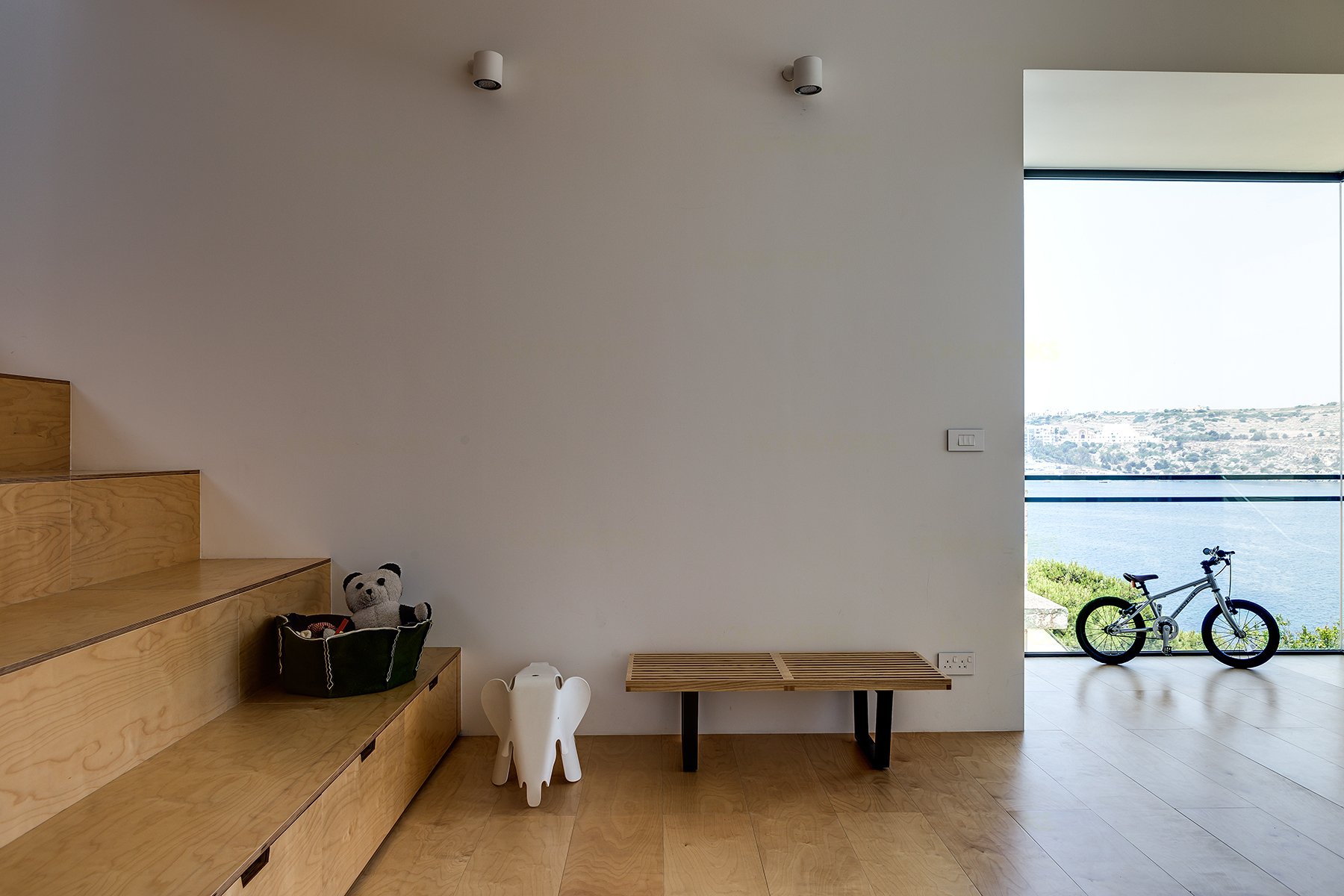 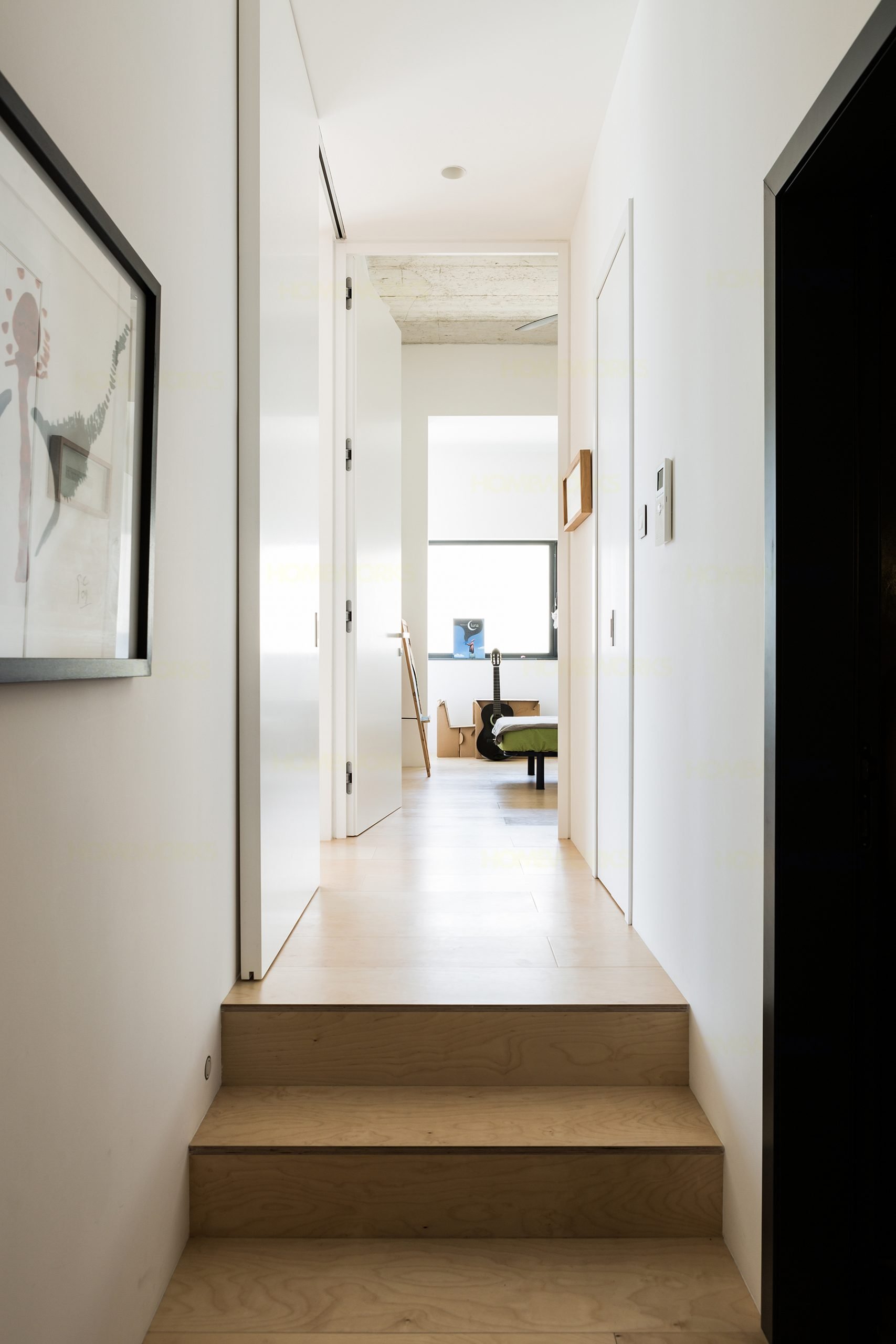 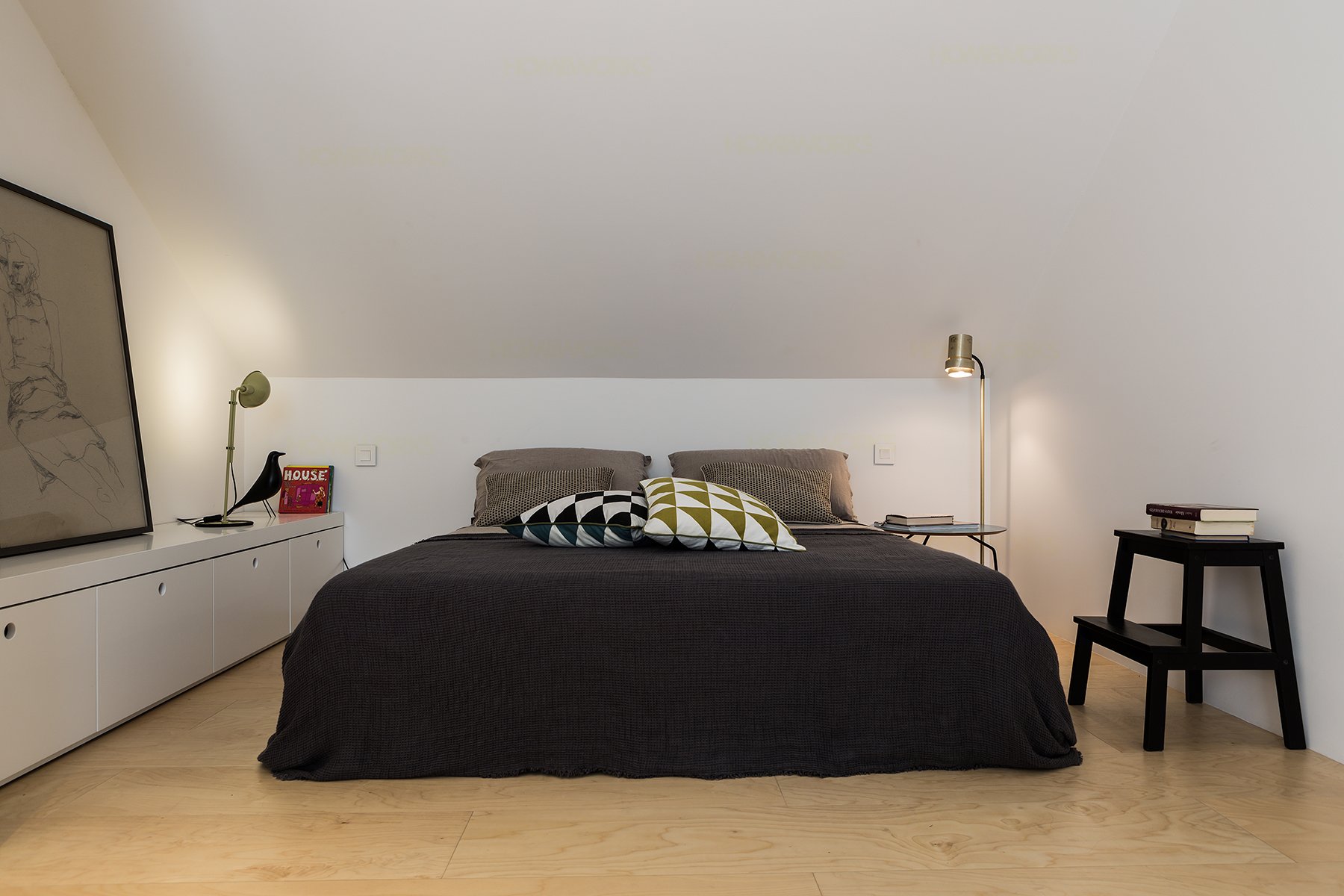 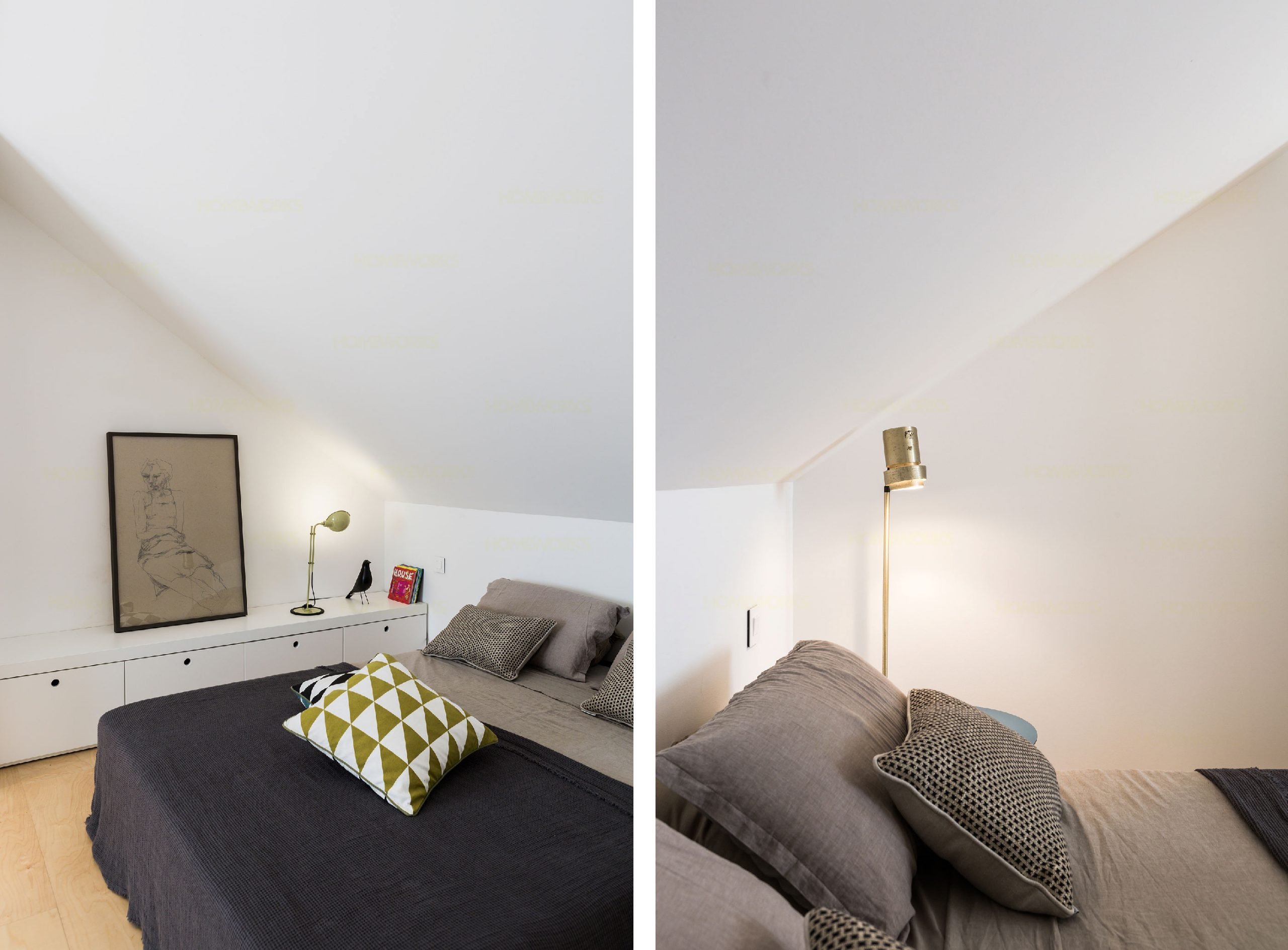 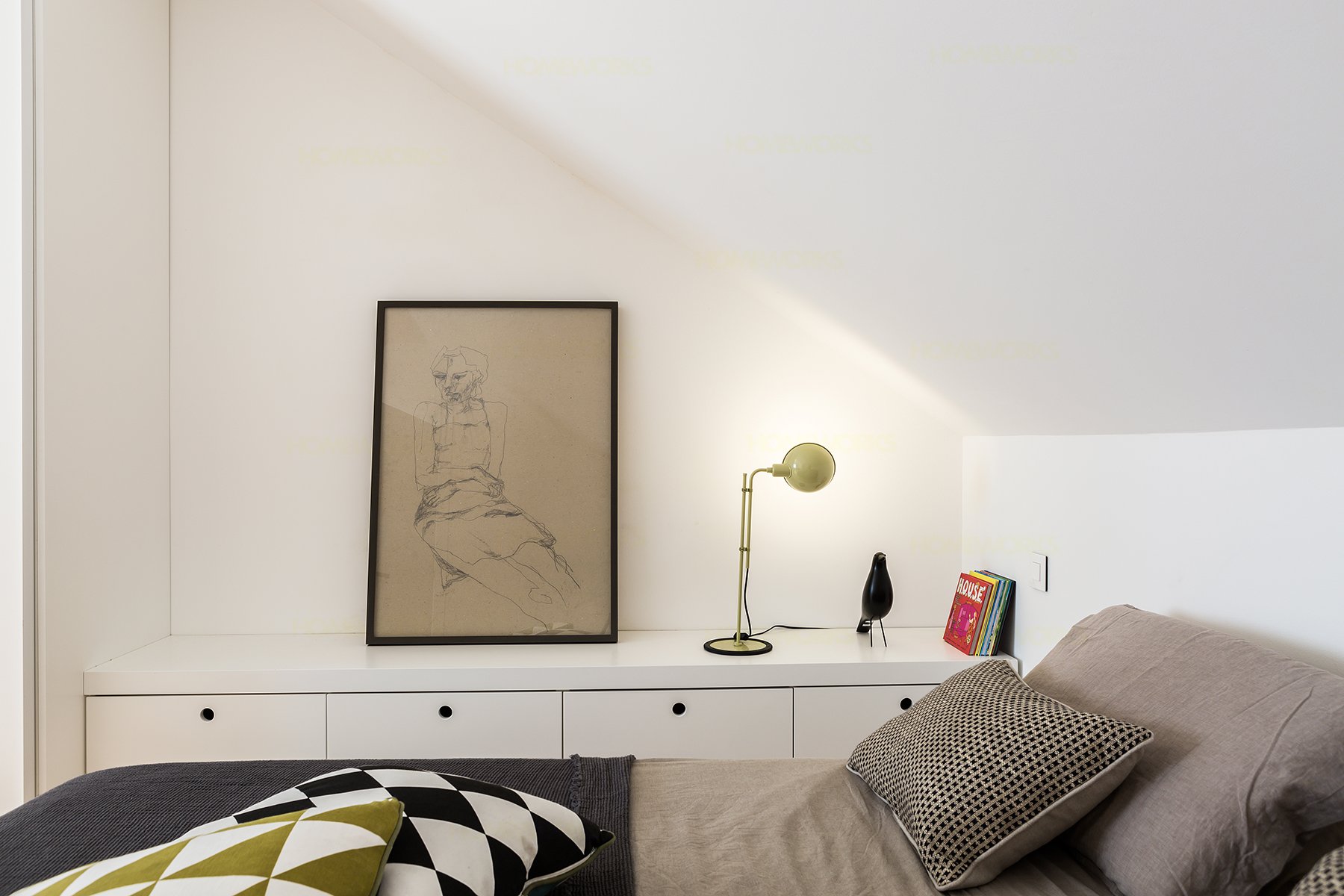 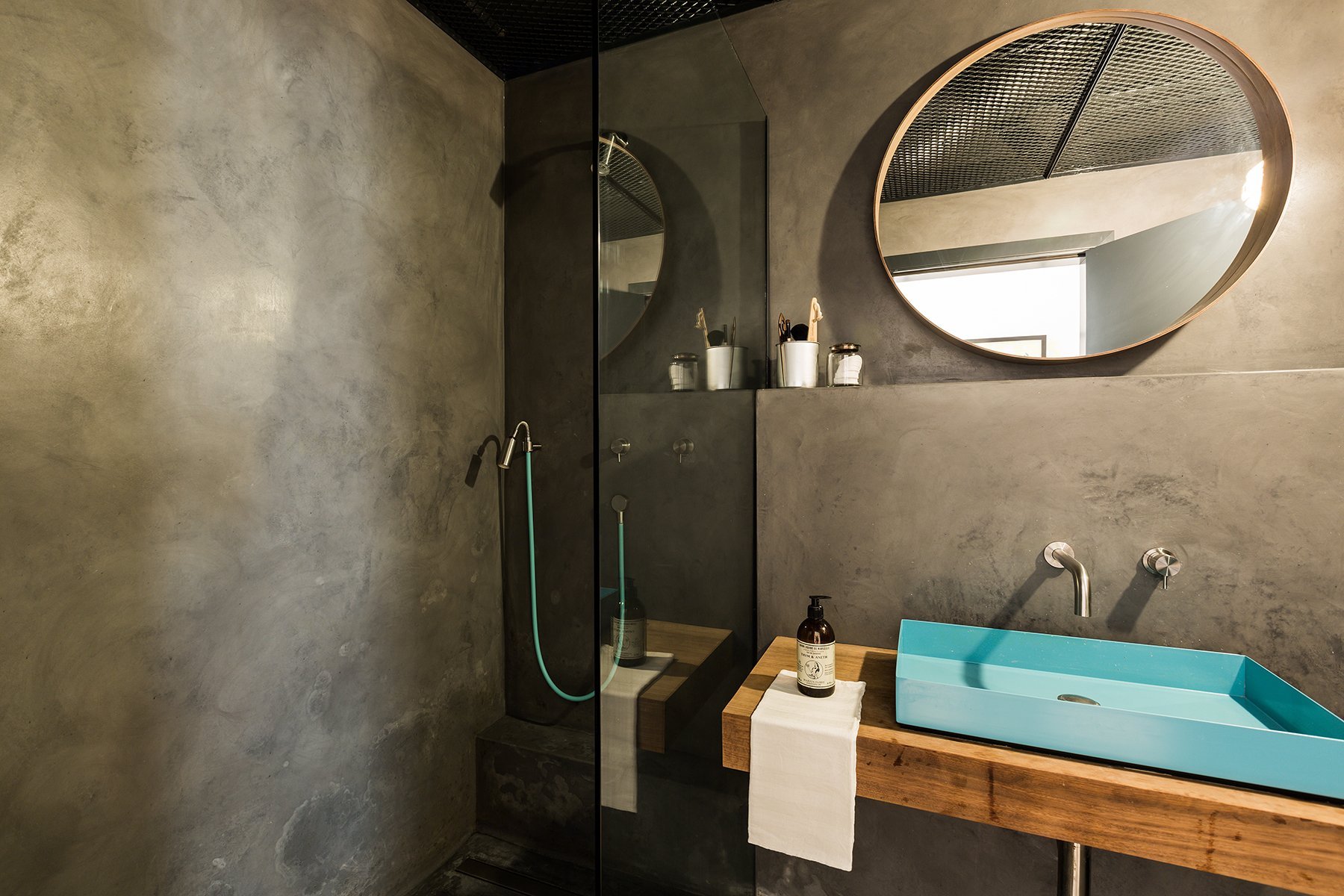