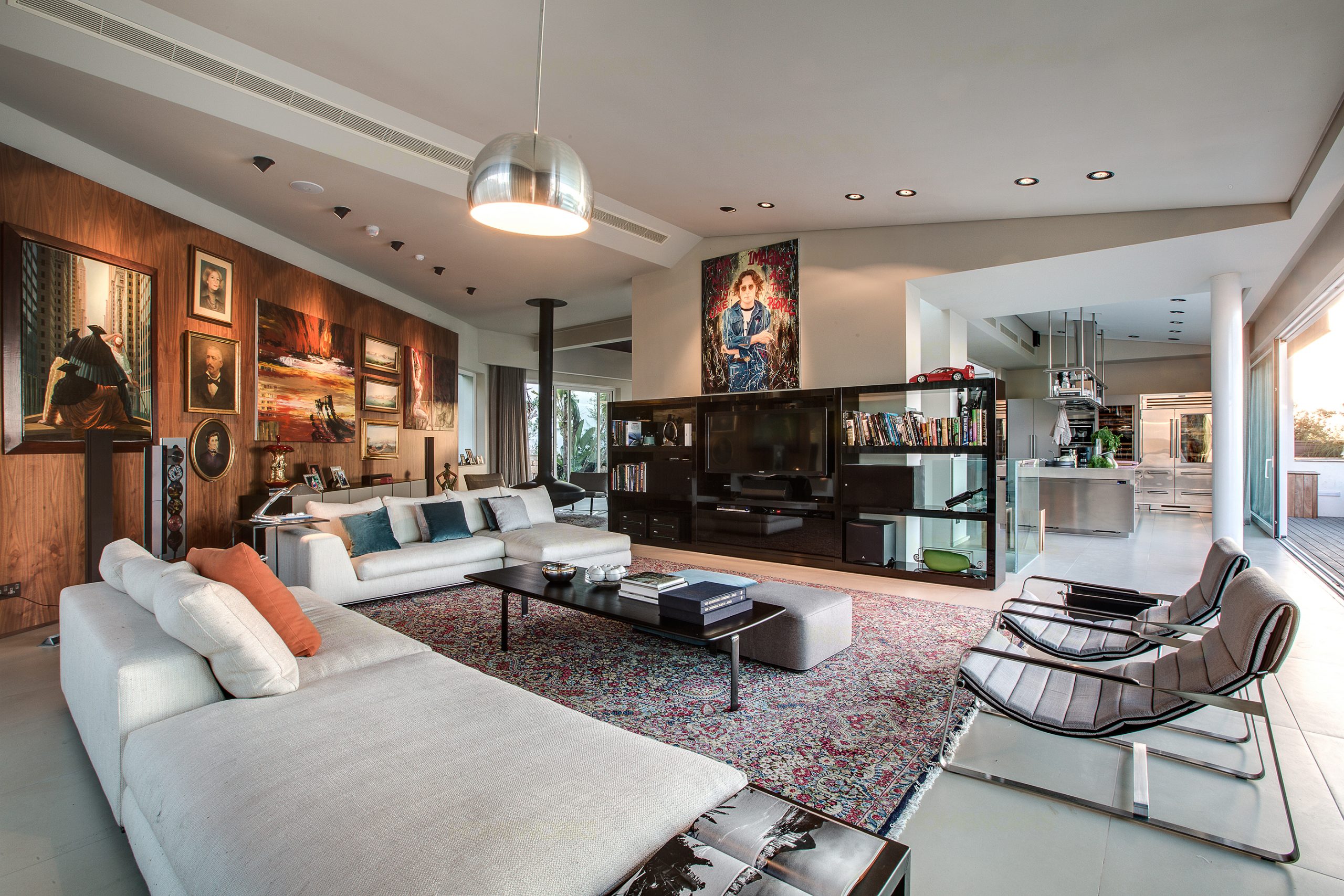 The notion seems unlikely; a renowned burgeoning businessman who genuinely digs interiors. It seems improbable because there’s a particular sensitivity to those who have an enthusiasm for homes – it’s about attention to detail, creativity and being realistic about what’s important.

“This is something we as architects appreciated; it’s not often that you get a client who understands so clearly the need for greenery. It helped us immensely in merging the indoors and outdoors…

Kevin DeCesare is the paradox. HOMEWORKS has seen the homeowner evolve; back in 2007, the move from his villa to his Sliema apartment was a big one. He auctioned off most of his inherited furniture pieces and paintings with the desire to start from scratch. Four years later, Kevin moved into another Sliema apartment – this time, the focus was on warm and comfortable living. There, he was steadfast about maintaining two key elements: space and views. It was all about exploring the idea of simplified and convenient living, with gadgets being paramount.

At this time, the homeowner began the conversion of his old villa in Bahar Ic-Caghaq into a cluster of five modern houses. He engaged _spacestudio (now Forward Architects) to complete the conversion, each villa renovated with his consistent input and supervision. Deliberate that the last villa converted would be where he would live, he took the opportunity to learn and avoid what he did through his previous renovations. And so, finally, under the architectural and interior design guidance of Forward Architects, the mother of all Kevin’s conversions has come to fruition; this impossibly striking house with every aspect and detail honed to suit what Kevin has evolved to want.

Kevin, “Although the other villas of the cluster are fantastic; this one is far more personal. As always, I gave the architects room to breathe and do their own thing, but I wanted all the decisions to go through my hands on this one.”

Architect Nicola Muscat, “Kevin knows what he wants, but he’s excellent at considering good design paramount. If your argument makes better design sense, he accedes. There were other times when it was the other way around – he would be sure about something and so would insist. These choices turned out to be the best options for his particular lifestyle. He’s realistic about what he needs, which is not often the case with homeowners.”

The insight from the previous conversions was invaluable – the trials and errors had already occurred. This one was a winner. Retaining the site’s greenery was one of Kevin’s highest priorities. The excavation was carried out around the existing trees, which resulted in stunning pockets of plantation throughout, such as the palm trees in the courtyard, side atriums and back garden. Nicola, “This is something we as architects appreciated; it’s not often that you get a client who understands so clearly the need for greenery. It helped us immensely in merging the indoors and outdoors. Kevin is truly committed to his garden, which means that maintenance is not an issue.”

The design of the other converted villas is minimalist with simple architecture, neutral finishings and colours. Kevin wanted his own home to be more colourful and individual. “I wanted to be much more involved in this one. I wanted the structure to accommodate my particular way of living. I wanted to choose my furnishings and materials, as well as bring in the items that I’ve accumulated over the years.” The furniture that Kevin chose kept the overall look clean yet warm. It’s clear that quality was paramount – the furniture is by Minotti, outdoor furniture by B&B Italia and Gandia Blasco, bathrooms by Boffi, and wardrobes by Porro. Other options, such as the deep purple ceiling in the dining room and the black fittings instead of white, created further warmth.

The large walnut wood-clad living room wall with a mantle brings enormous comfort to the space and showcases Kevin’s various paintings and eclectic pieces. The suspended bulbous black steel ‘Focus’ fireplace that integrates the open plan living and dining area is rotational so that the fire can face whichever area is desired. Apart from the obvious warmth that a fireplace brings, it also became a striking feature, which gently broke up the enormous space.

One of the principal architectural goals was to retain as much ceiling height as possible. Various anomalies were considered to achieve this (such as placing an air conditioner outside in one case) and using glass extensively. Sloping ceilings – which were adapted from the architecture – offer the space more interest. Some were reinterpreted, such as in the dining room, while others are sloping like the kitchen.

Kevin loves to entertain, apart from creating successful businesses and being partial to fast cars, nature and homes. He built the house around this lifestyle to cater for more people in the place. The Arclinea kitchen is designed to hide everything. The functionality (and there’s a lot of it) is entirely concealed. An enormous state of the art Sub Zero wine fridge keeps the wines at a perfect temperature. The numerous sizeable guest bedrooms downstairs offer ample light and ventilation via their corresponding courtyards.

The space has some spectacular design features, all Kevin; the triple-tier waterfall, which starts from the pool deck and falls through to the master bedroom courtyard, is one of the most striking ones. Also quite impressive in the master bedroom is the open plan deep and sizeable freestanding tub, flanked by the walk-in wardrobe.

Outside, the South African inspired back garden encloses a wooden table protected by a large thatched umbrella. The well-lit gardens, courtyards and pool patio are all energy-efficient. The pool, clad in a teal slate, is designed for swimmers to feel as if they’re open to the horizon. The wooden decking alongside the sharp blue of the water creates a striking effect. The cool, white pavilion on the patio controls sun shading, so that summer entertaining is comfortable and easy.

Whether Kevin’s design evolution stops here is yet to be seen. In the meantime, he’s enjoying his ideal space – one with a brilliant combination of indoors and outdoors, with countless areas to entertain that is comfortable, convenient, warm and above all, personal.

Kevin chose his own furnishings and materials to retain a personal feel. The suspended bulbous black steel ‘Focus’ fireplace integrates the open plan living and dining area and is rotational so that the fire can face whichever area is desired.

The kitchen is juxtaposing indoor and outdoor areas, serving both seamlessly

Clad in a teal slate, the pool is designed for swimmers to feel as if they’re open to the horizon

Retaining the site’s greenery was one of Kevin’s highest priorities. The excavation was carried out around the existing trees, which resulted in stunning pockets of plantation throughout

Sloping ceilings – which were adapted from the architecture – offer the space more interest throughout. Some were reinterpreted, such as here, in the dining room

The green courtyards integrate with every room maintaining the outside in

The furniture that Kevin chose kept the overall look clean yet warm. Quality was paramount – most of the living room furniture is by Minotti

The large walnut wood-clad living room wall with a mantle not only brings in enormous comfort to the space, but also acts as a showcase for Kevin’s various paintings and eclectic pieces

In the master bedroom, an impressive open-plan deep and large freestanding tub is flanked by the walk-in wardrobe

All external lighting is LED so that the well-lit gardens, courtyards and pool patio can be enjoyed without any energy efficiency concern

The cool, white pavilion on the patio controls sun shading so that summer entertaining is comfortable and easy 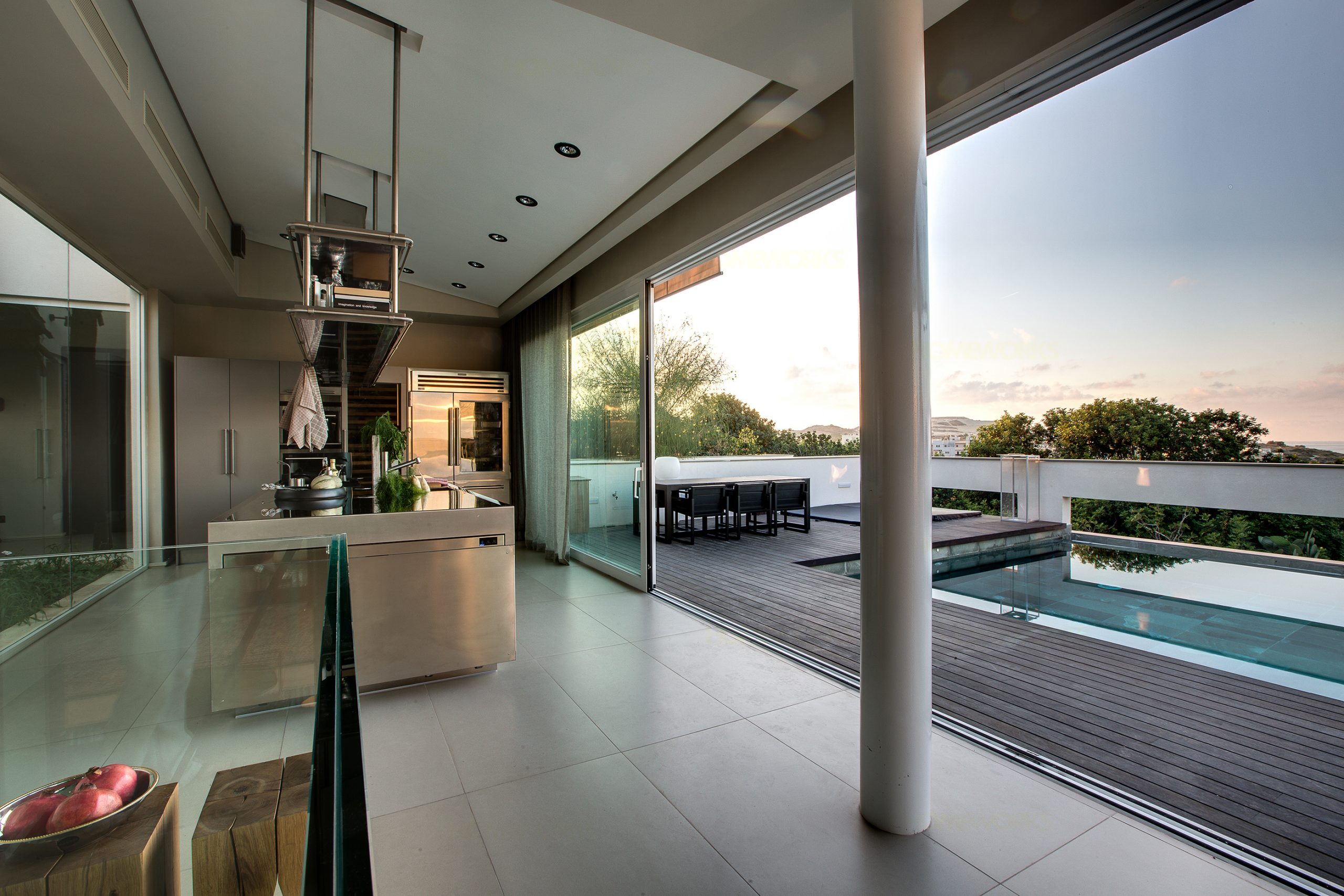 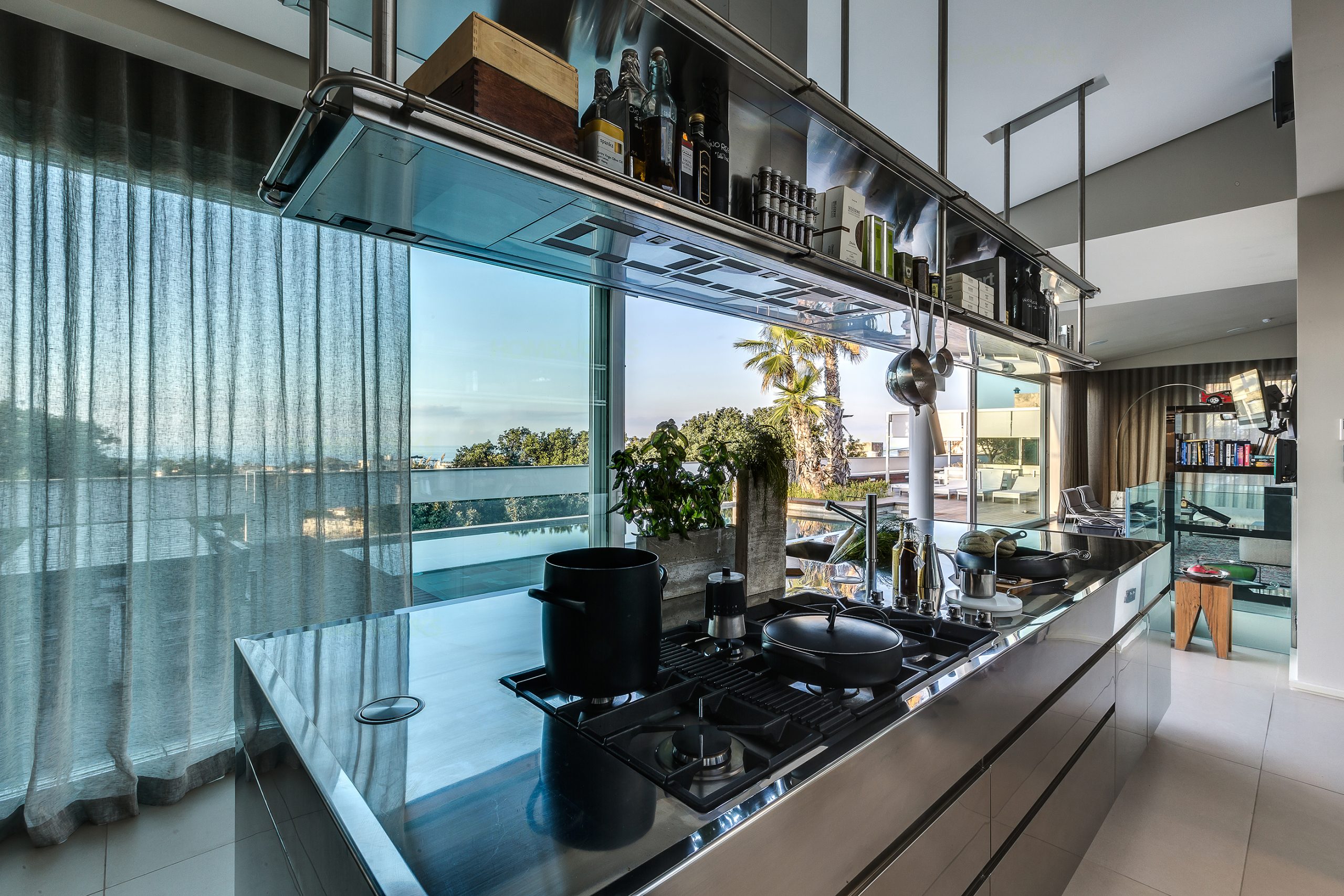 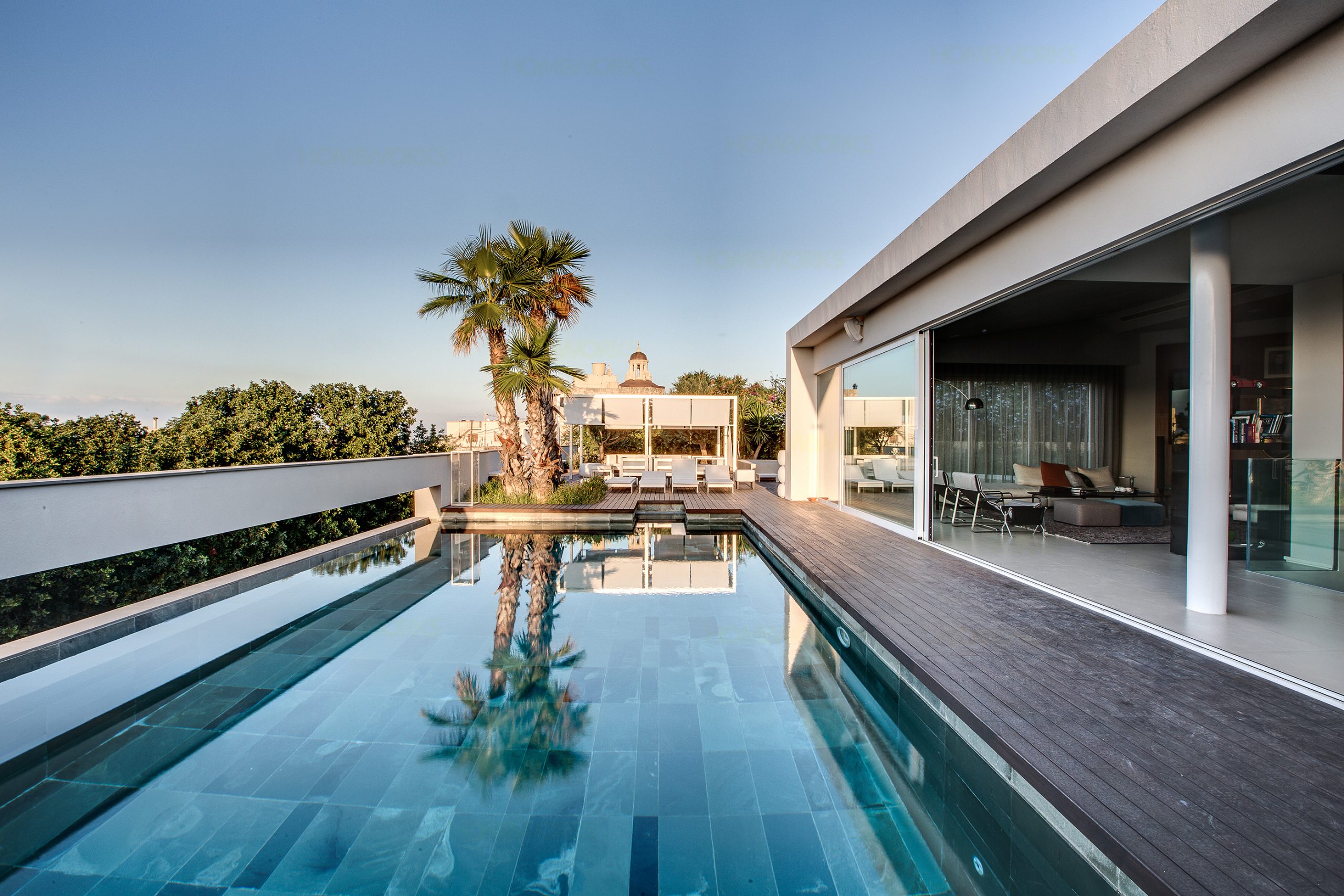 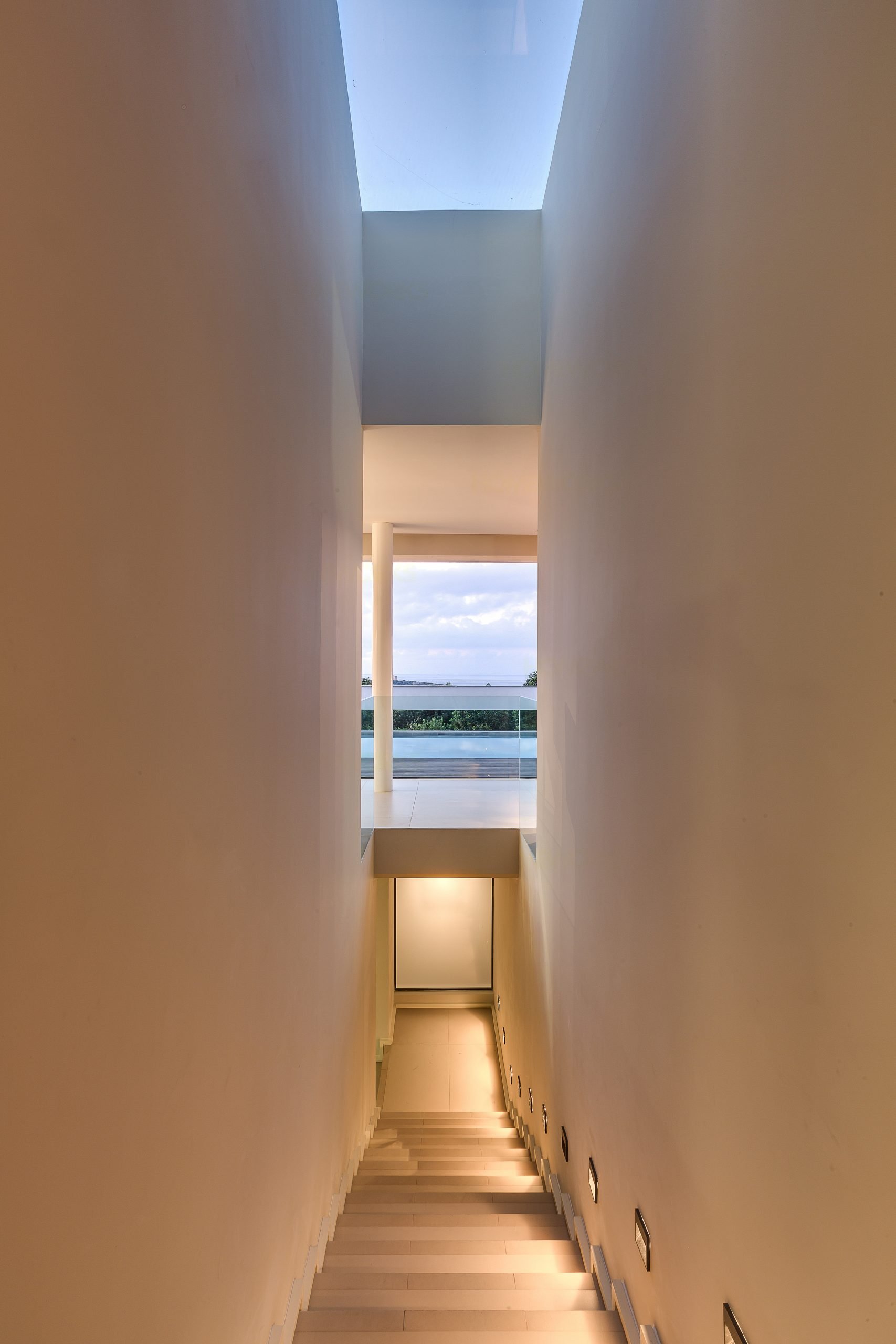 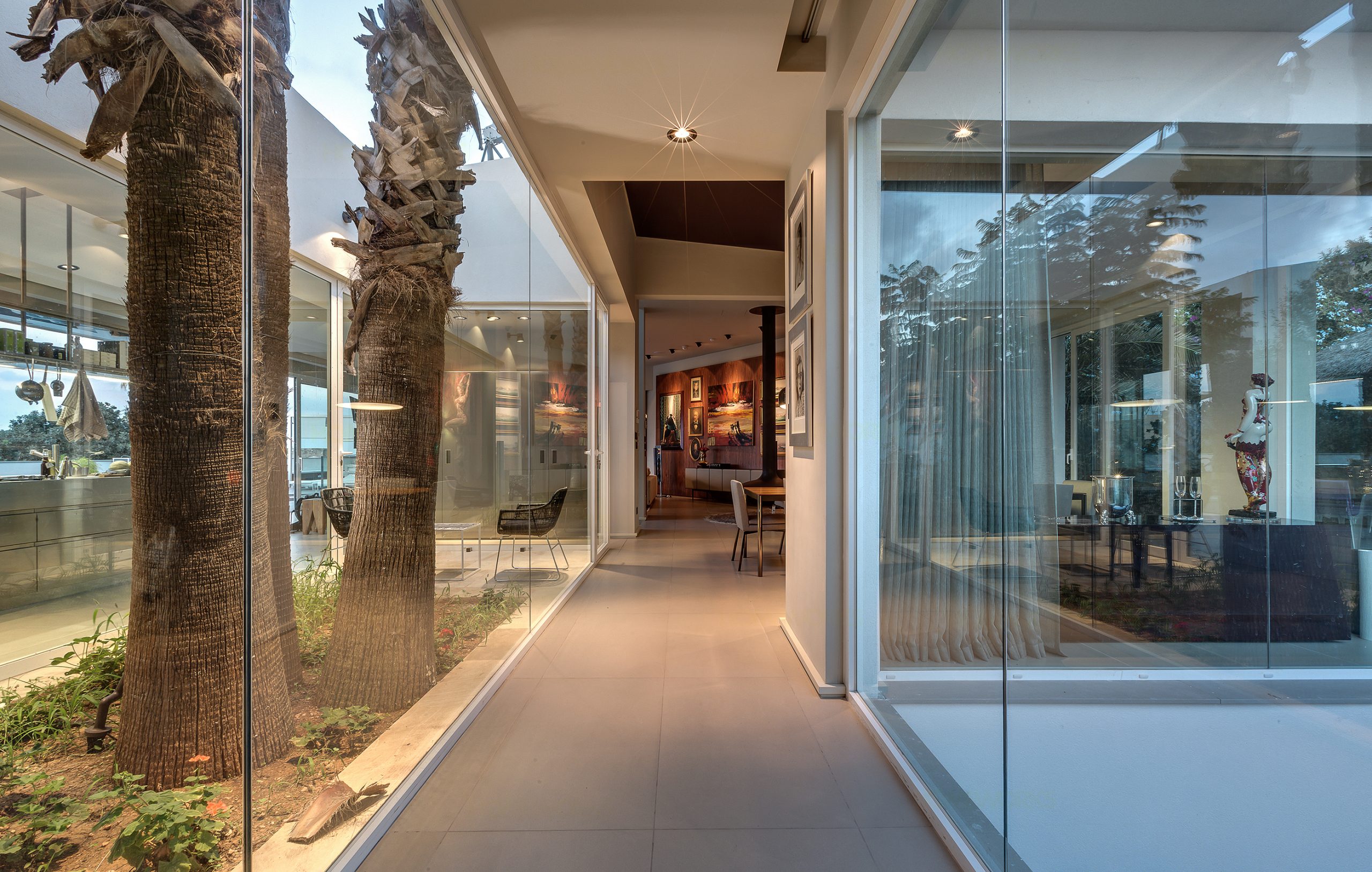 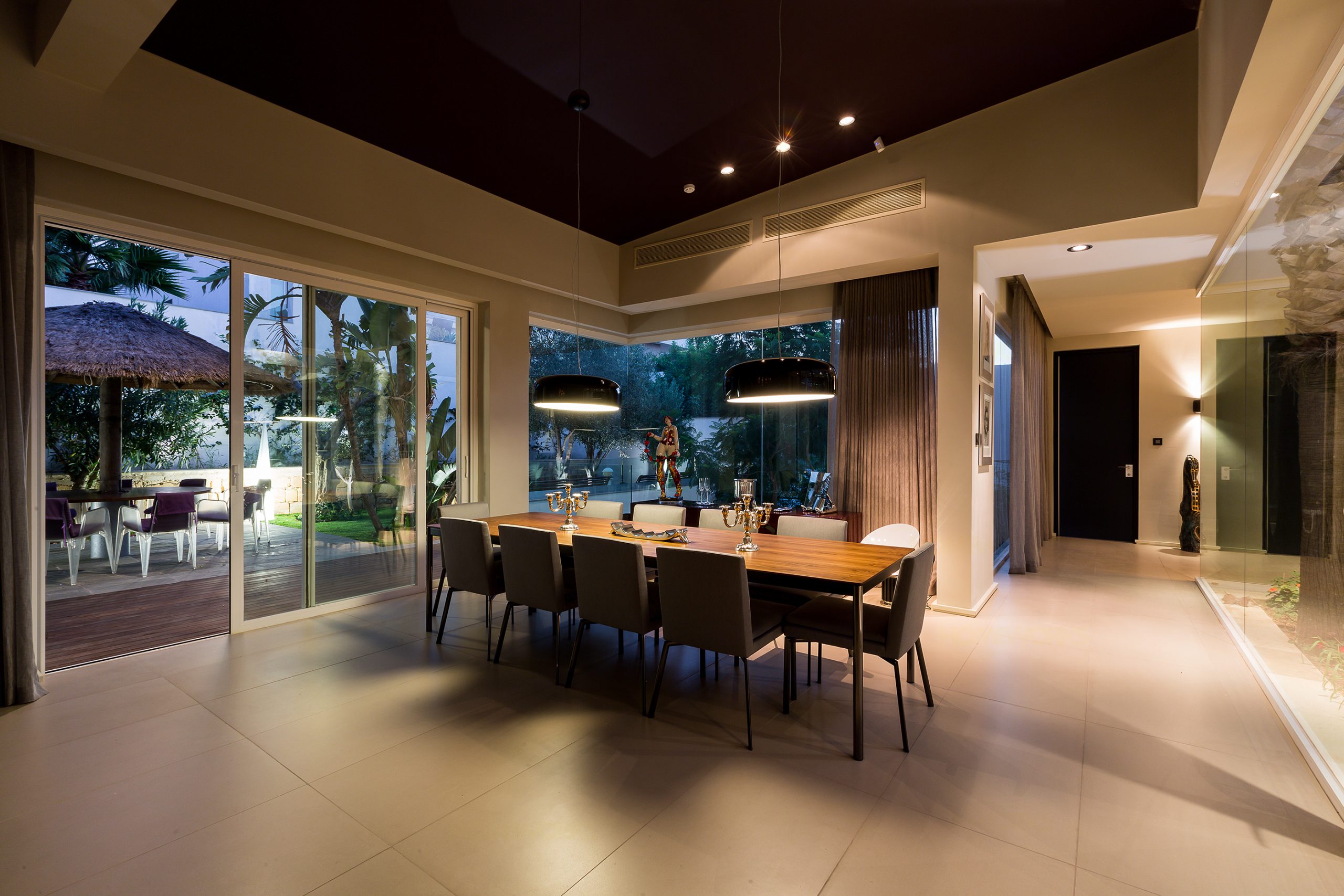 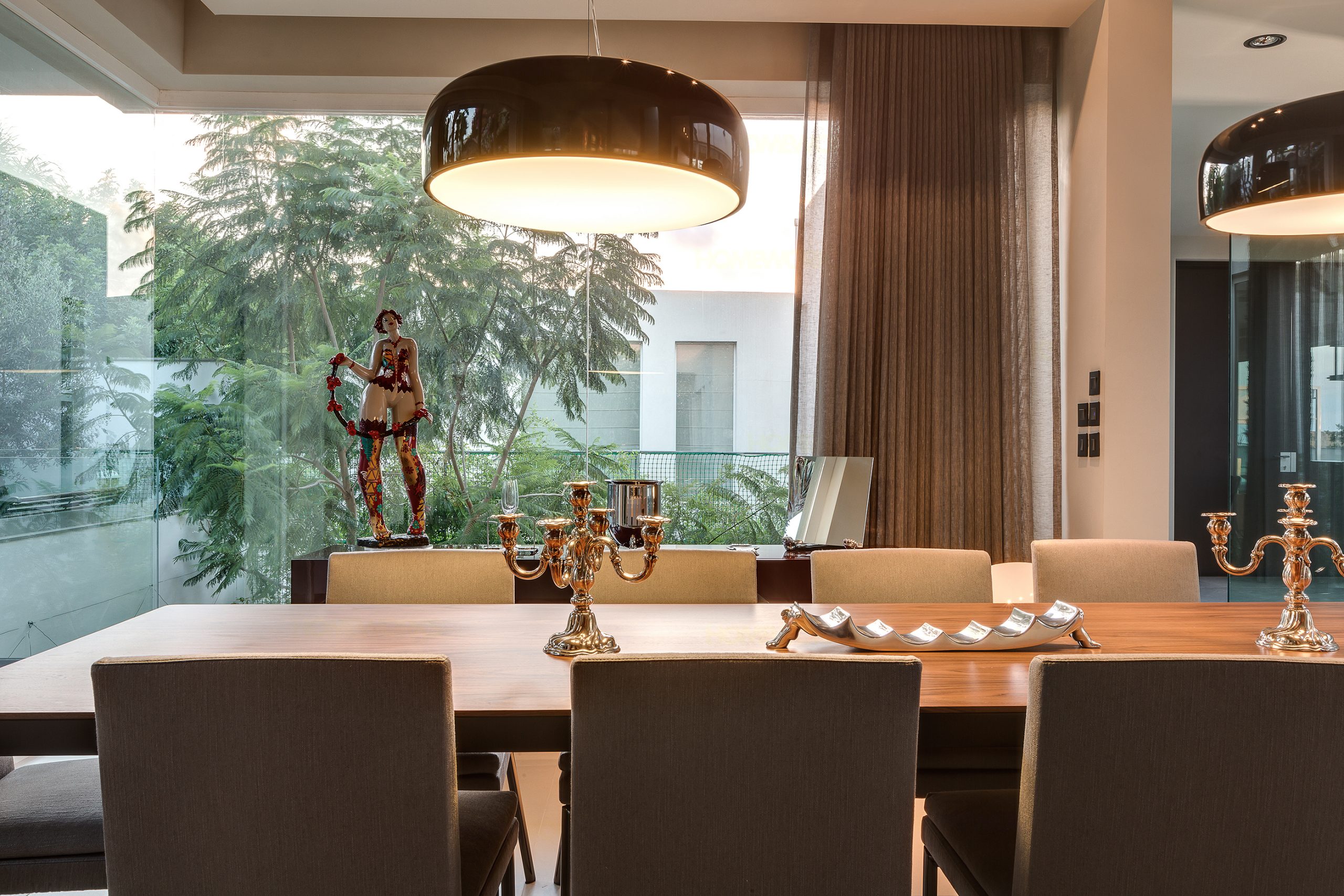 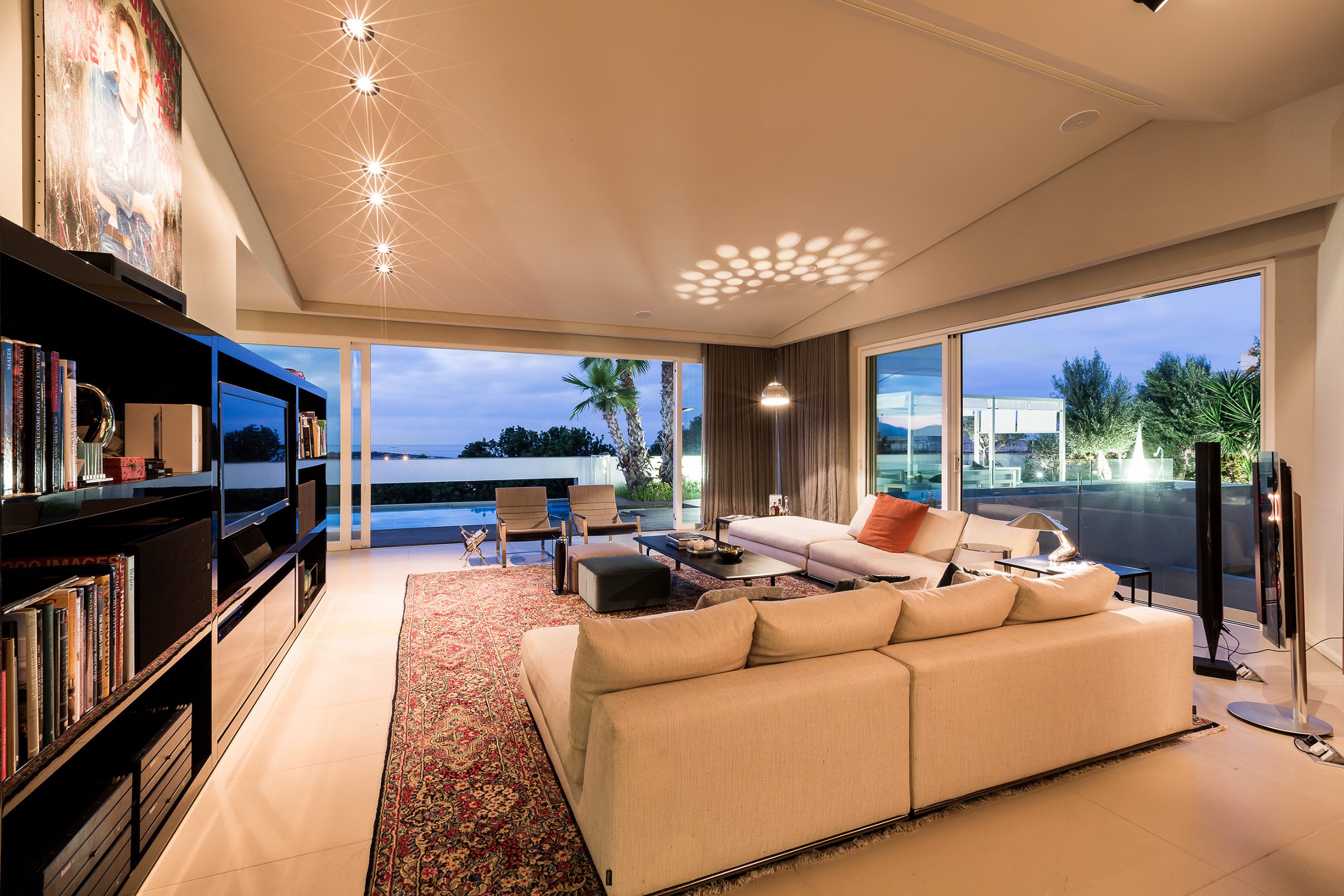 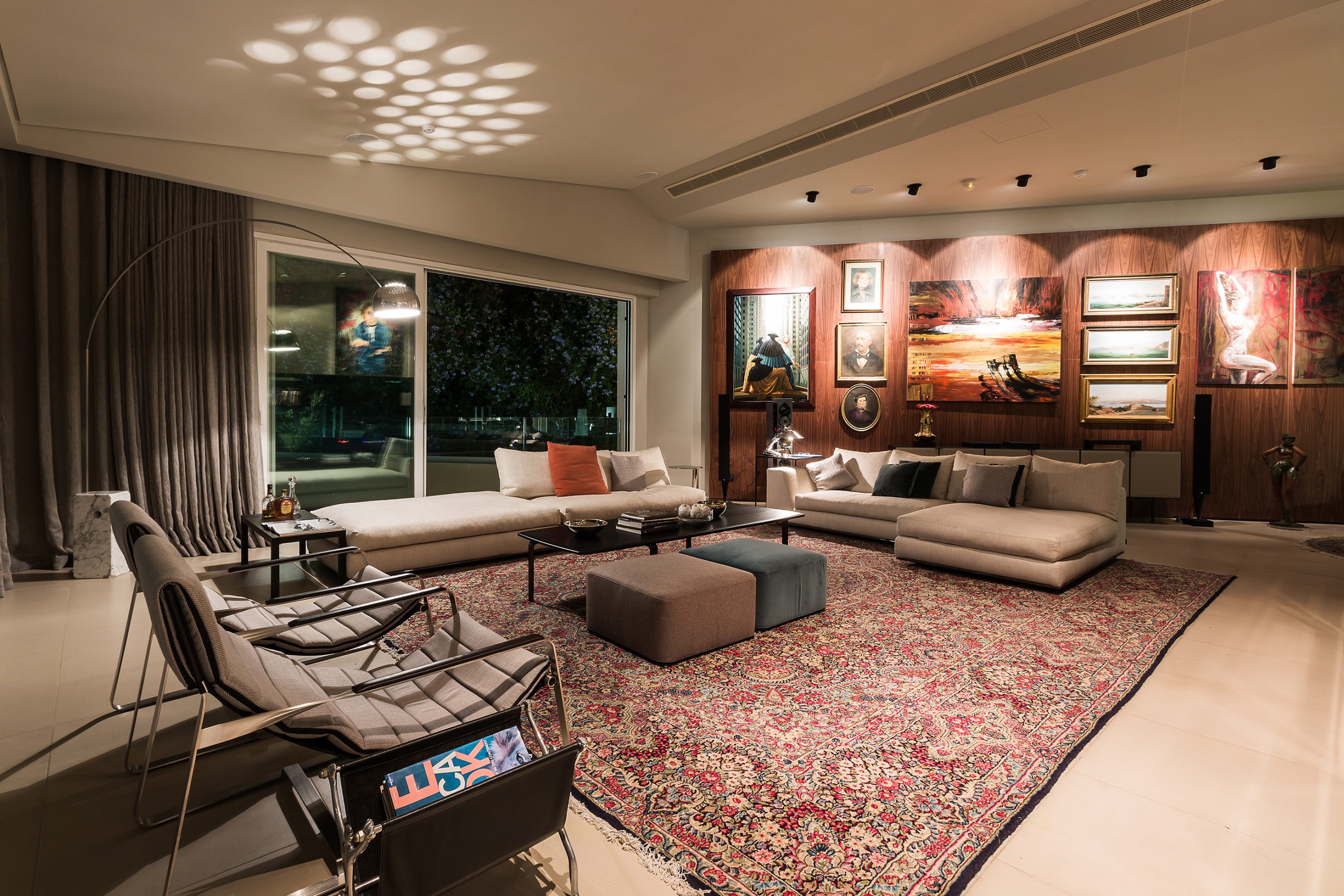 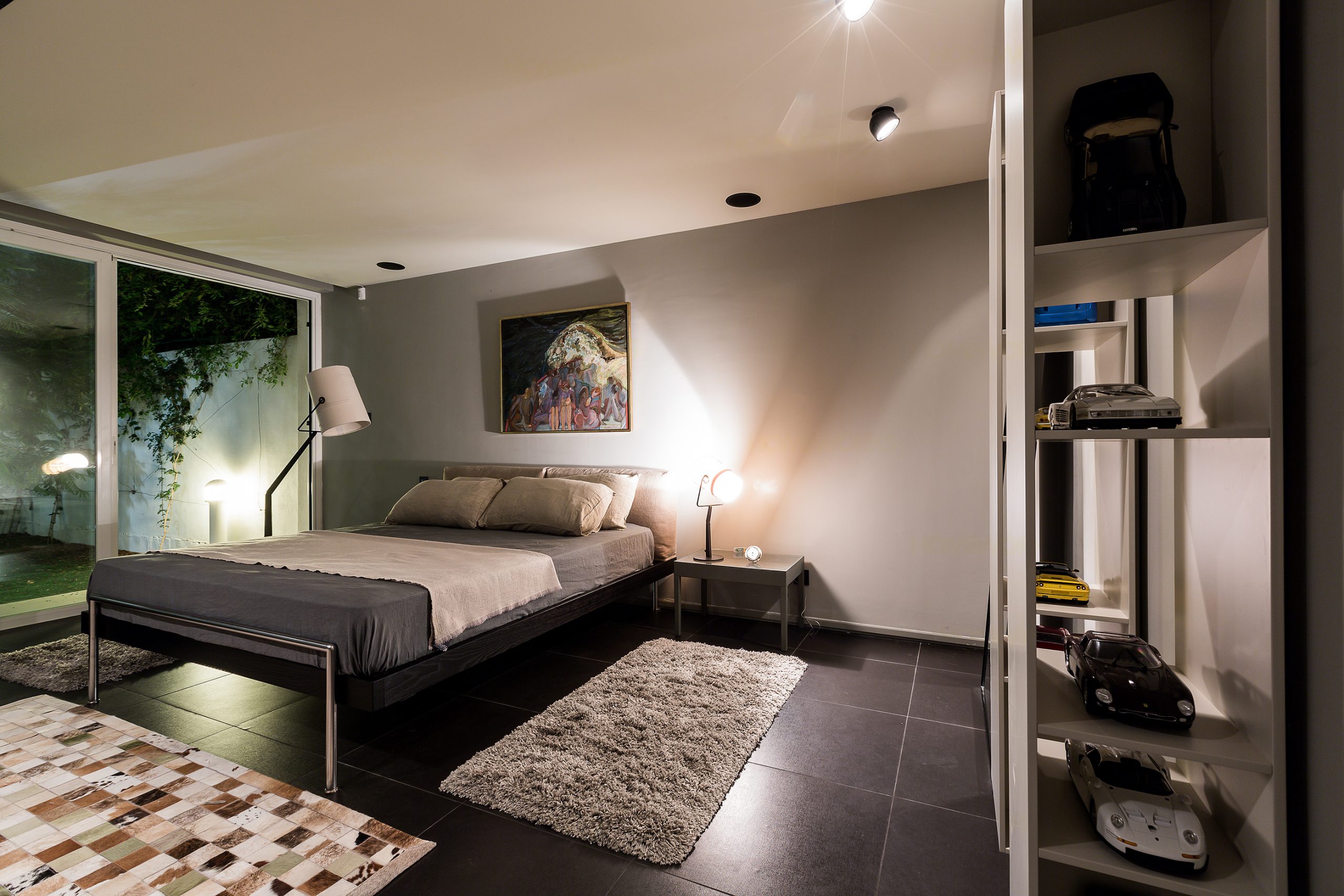 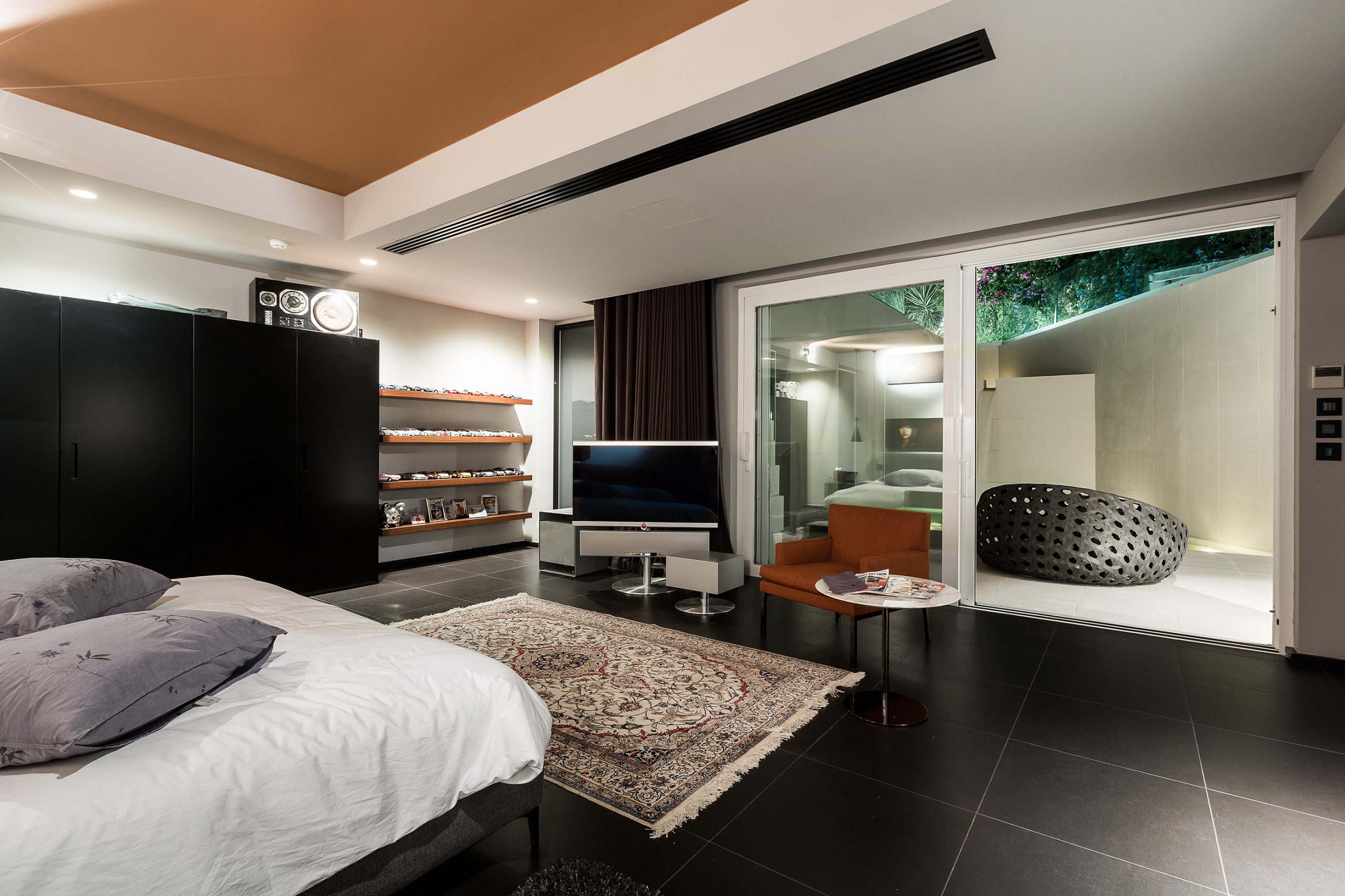 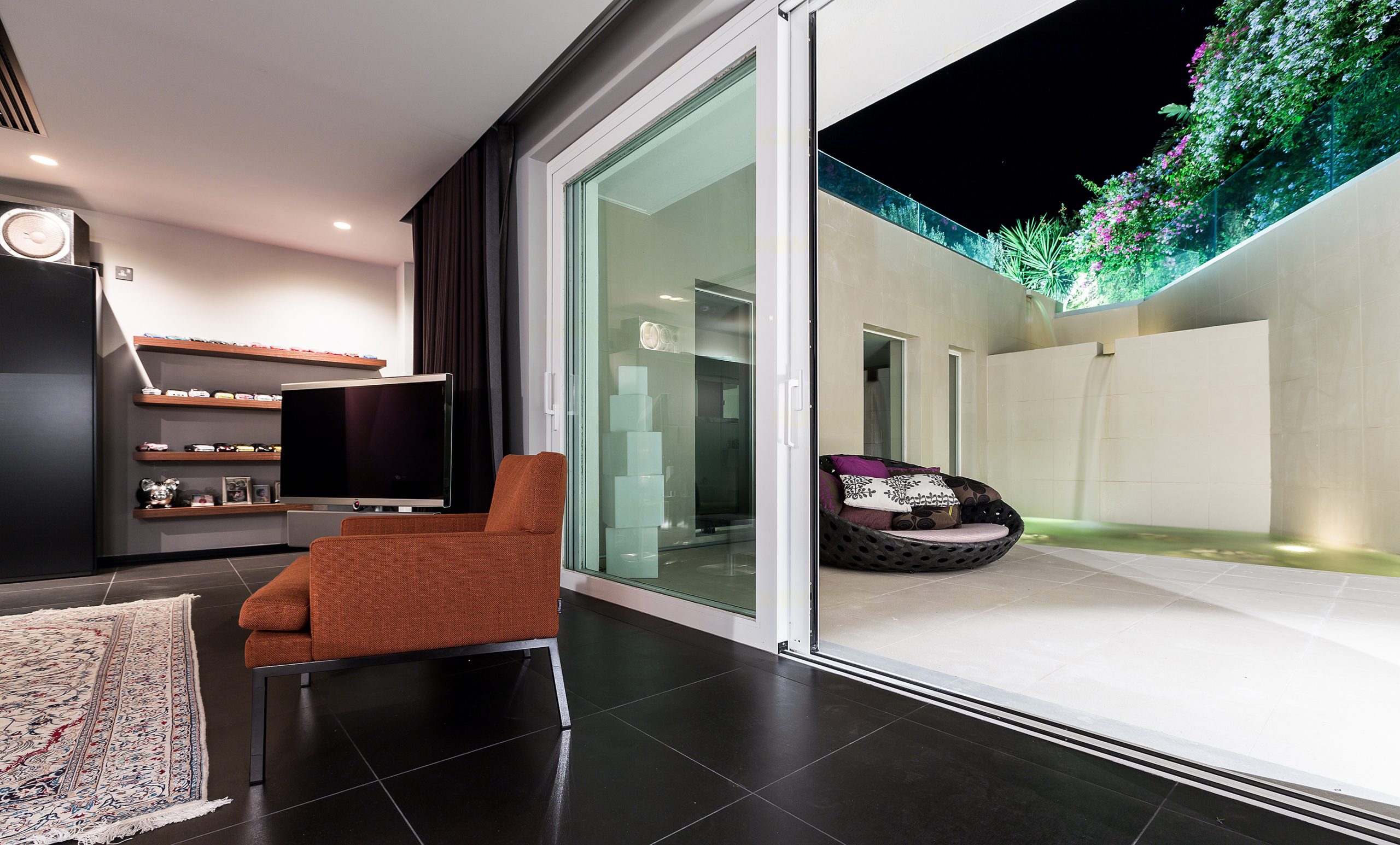 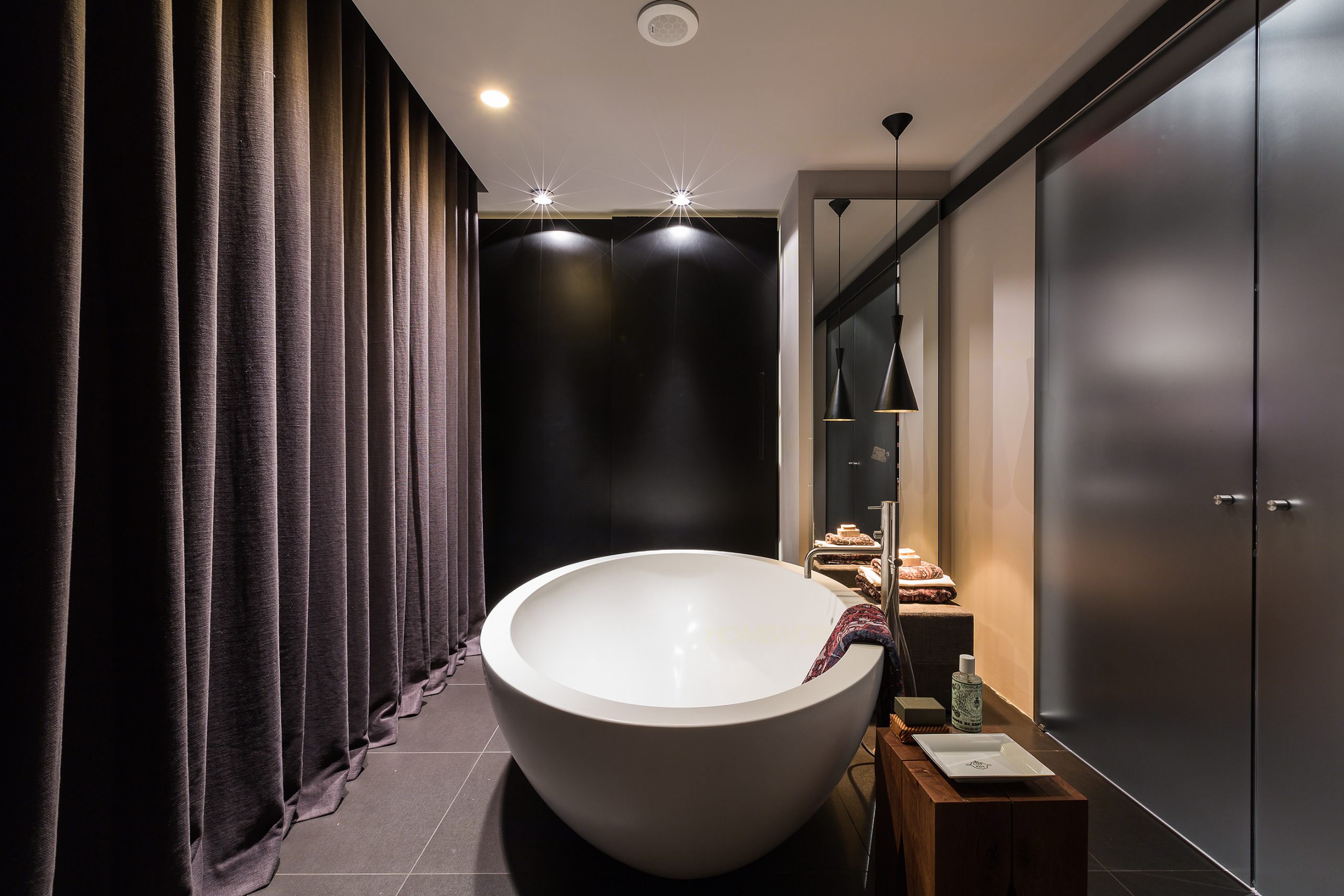 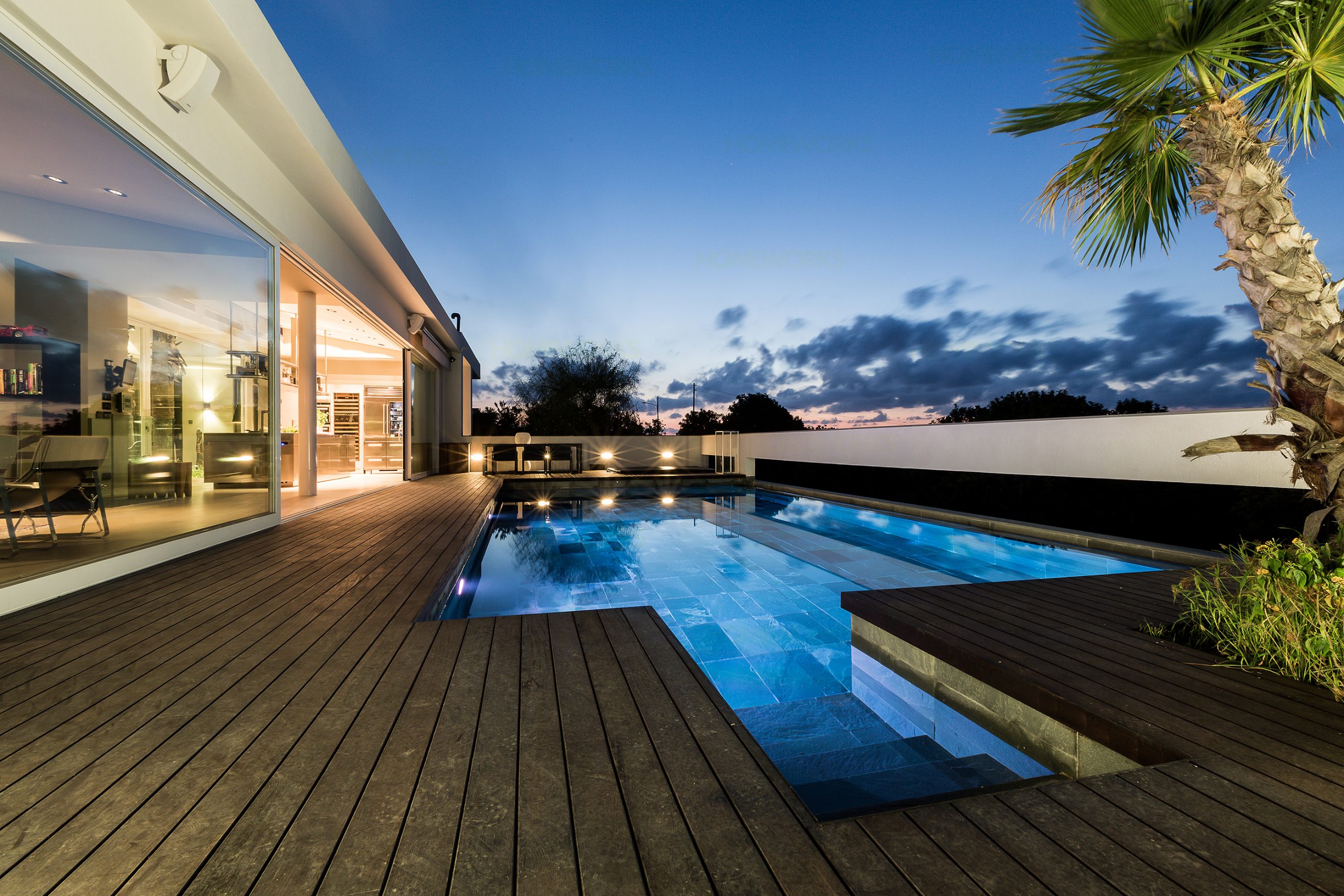 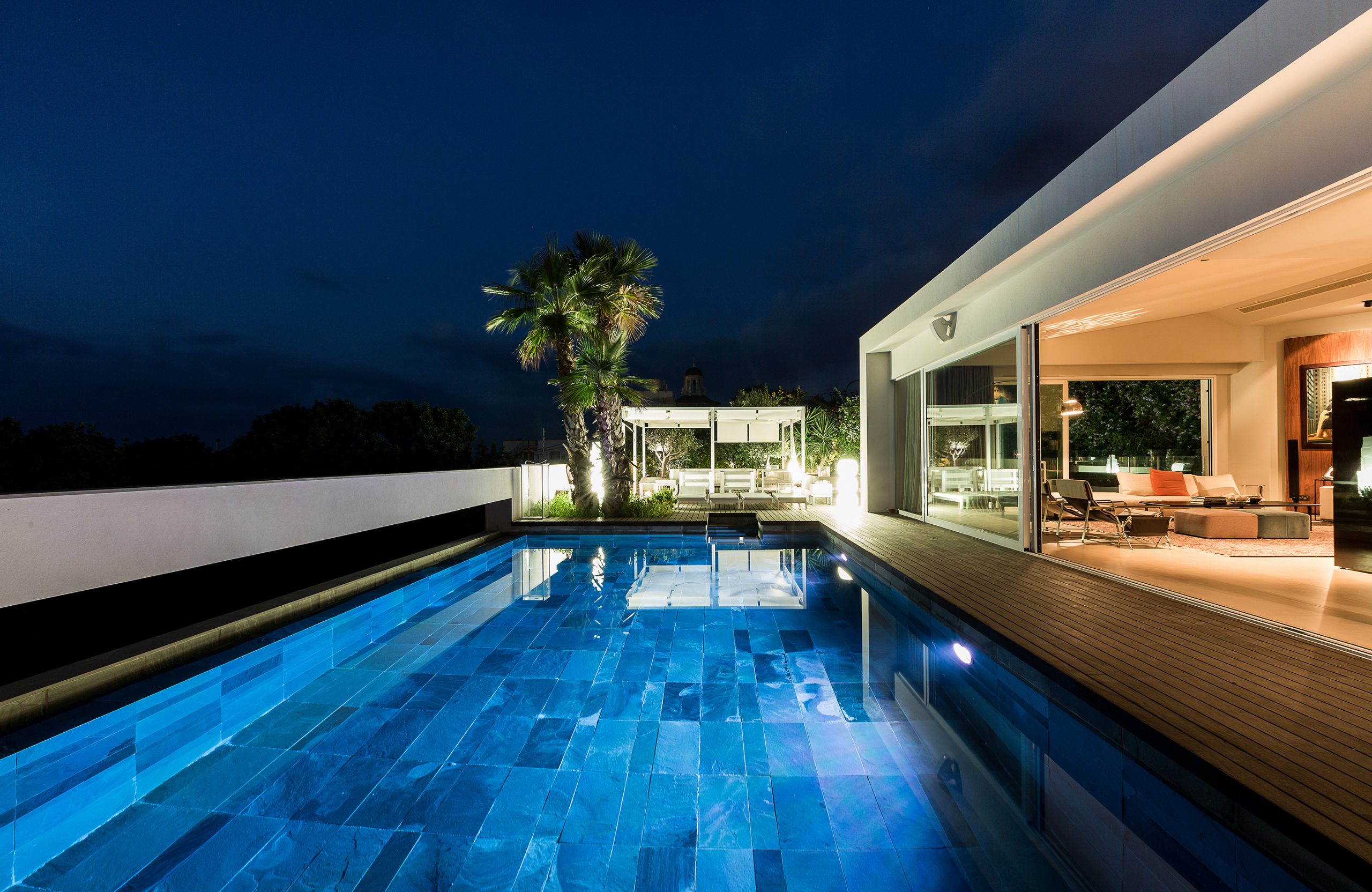 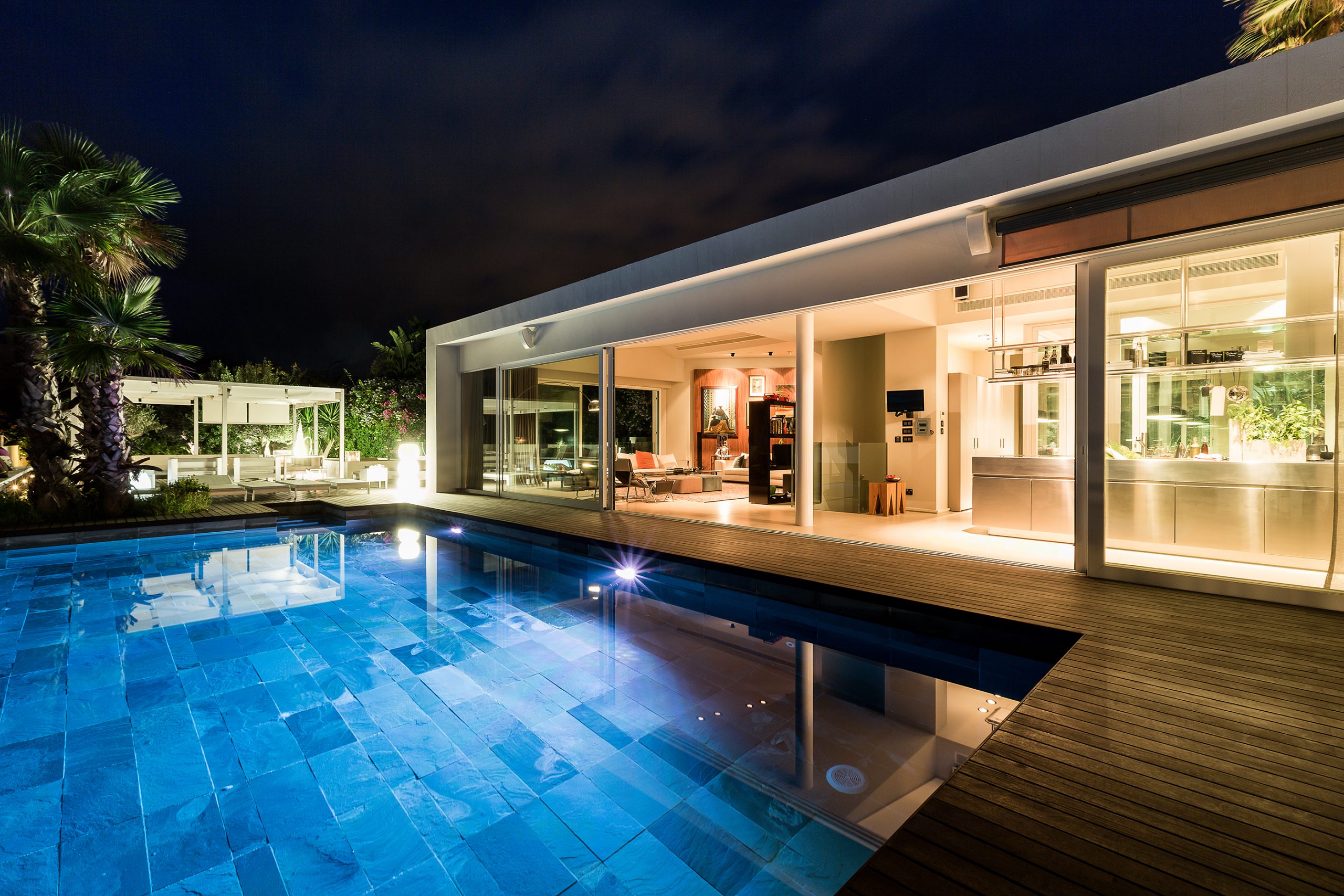 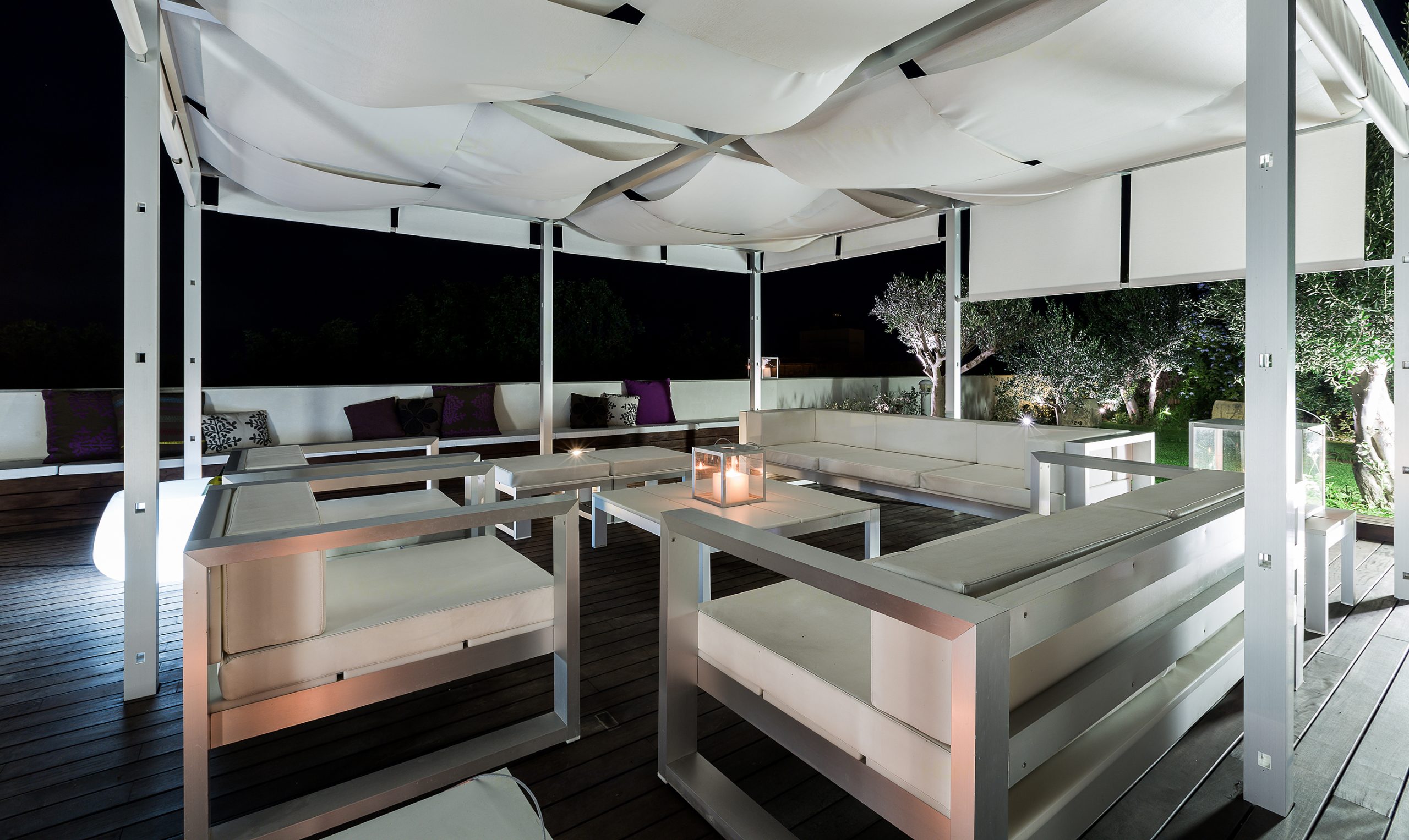