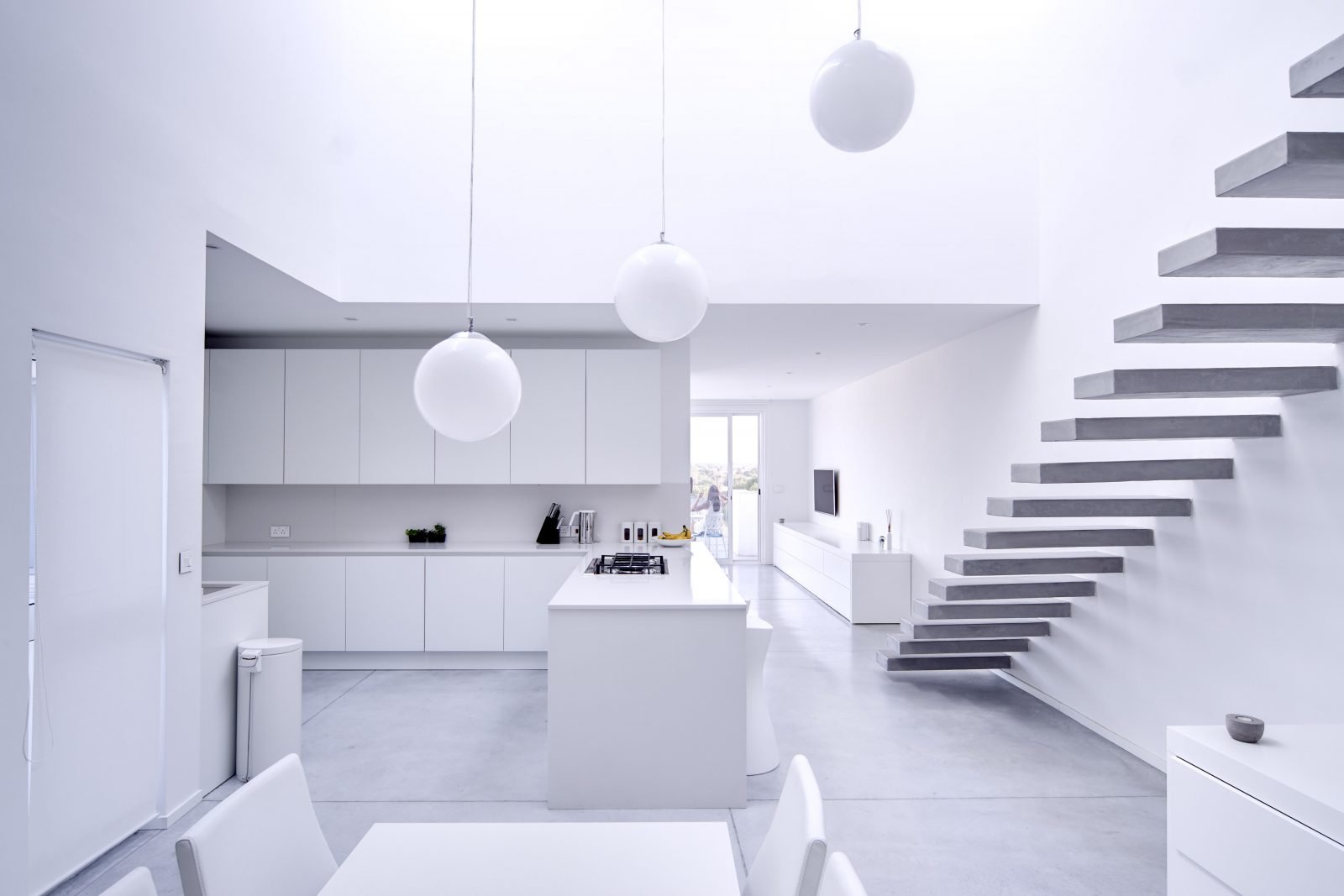 Not everyone would want to live in such a completely white space but Rodianne Cassar loves her apartment absolutely. She has even given it a name – Elle. ‘I’ve lived in beautiful homes but nothing compares to this one,’ she says. ‘Elle is a reflection of who I am. I believe in ‘less is more` and lack of clutter in life in general. I wanted a relaxed and elegant atmosphere in every room of the house, with only what I needed and what added to the peaceful vibe of the house. There`s just something about minimal spaces that I`m instinctively drawn to. I find the simplistic beauty of a minimalist space mesmerizing.’
ME Architects created the apartment. Built new above an existing building in Gudja, they had the luxury of a completely blank canvas. ‘Beyond the brief, we were given a free hand,’ says architect Karl Ebejer. ‘And, unusually, we were able to stay with the original concept all the way through which was a refreshing change.’
The central double height space was key to the plan, creating a real sense of space, with significant slits for skylights for light and allowing Rodianne to see the sky. The two polished concrete floors are connected by a concrete, cantilevered staircase which was extremely challenging to install, the architects having to work with a 23cm party wall. ‘We considered options such as glass as a balustrade but we disregarded them because it took away from the purity of the space,’ says Karl.
The living room makes the most of the view with floor-to-ceiling windows and a large terrace; colour is absent here, too, the only touches coming from bottles in the built-in bar along one wall. Upstairs is the one bedroom, open to the rest of the apartment, with privacy given by the curtains which draw across.
Rodianne, a marketing manager, loves her apartment so much that she finds it hard to leave. ‘When I can, I opt to stay in instead ofgoing out,’ she says. ‘The large windows and skylights make it very bright and airy and that makes me feel more vibrant and happier. I never thought a home could affect your mood so much. I simply love this house and adore living in it! ‘Elle’ is my sanctuary; the place to escape and unwind.’

The double-height space is full of light thanks the skylights. This area contains the kitchen and dining area, and the cantilevered stairs that lead to the upper floor

The cantilevered staircase were a design challenge as they are attached to a party wall that is only 23cm thick. Throughout the day, there is an interplay of light through the staircase with the skylight above

Throughout the day, there is an interplay of light through the staircase with the skylight above

a large floor mirror accentuates the light downstairs and makes the space feel larger. The kitchen units are MDF spray-painted glossy white; the worktop made of absolute white quartz

Light floods in through the floor-to-ceiling windows with shots of colour provided by the bottles on the shelves of the built-in bar. The sofa was custom-made by Muccio Mobili.

Staircase leads to the upstairs bedroom. Curtains drawn can give privacy in an otherwise fully open-plan design

The colour palette of grey and white continues in the bedroom, where the pendant light keeps the look cohesive. Curtains are pulled across for privacy and a vast wardrobe keeps everything out of sight

A seamless transition between the bedroom and bathroom delineated only by the floor. The bathroom was done by NIC Design and supplied by A2 Ceramics

The only break in the all white are the two dark bathrooms, done with micro-cement walls and black accessories. ‘I love the contrast and they’re so chic and ideal to unwind in,’ says Rodianne

The only break in the all white are the two dark bathrooms, done with micro-cement walls and black accessories. ‘I love the contrast and they’re so chic and ideal to unwind in,’ says Rodianne 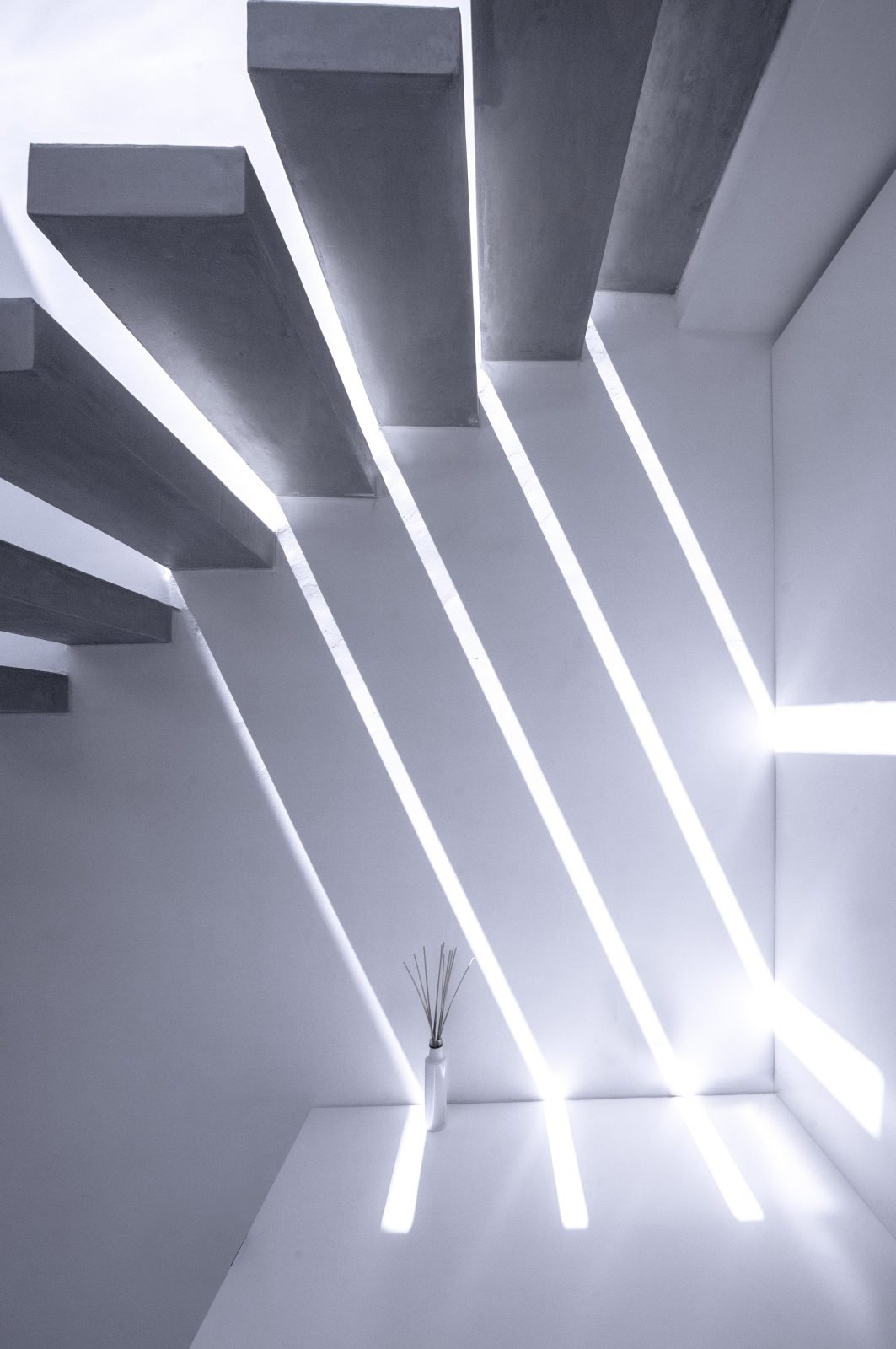 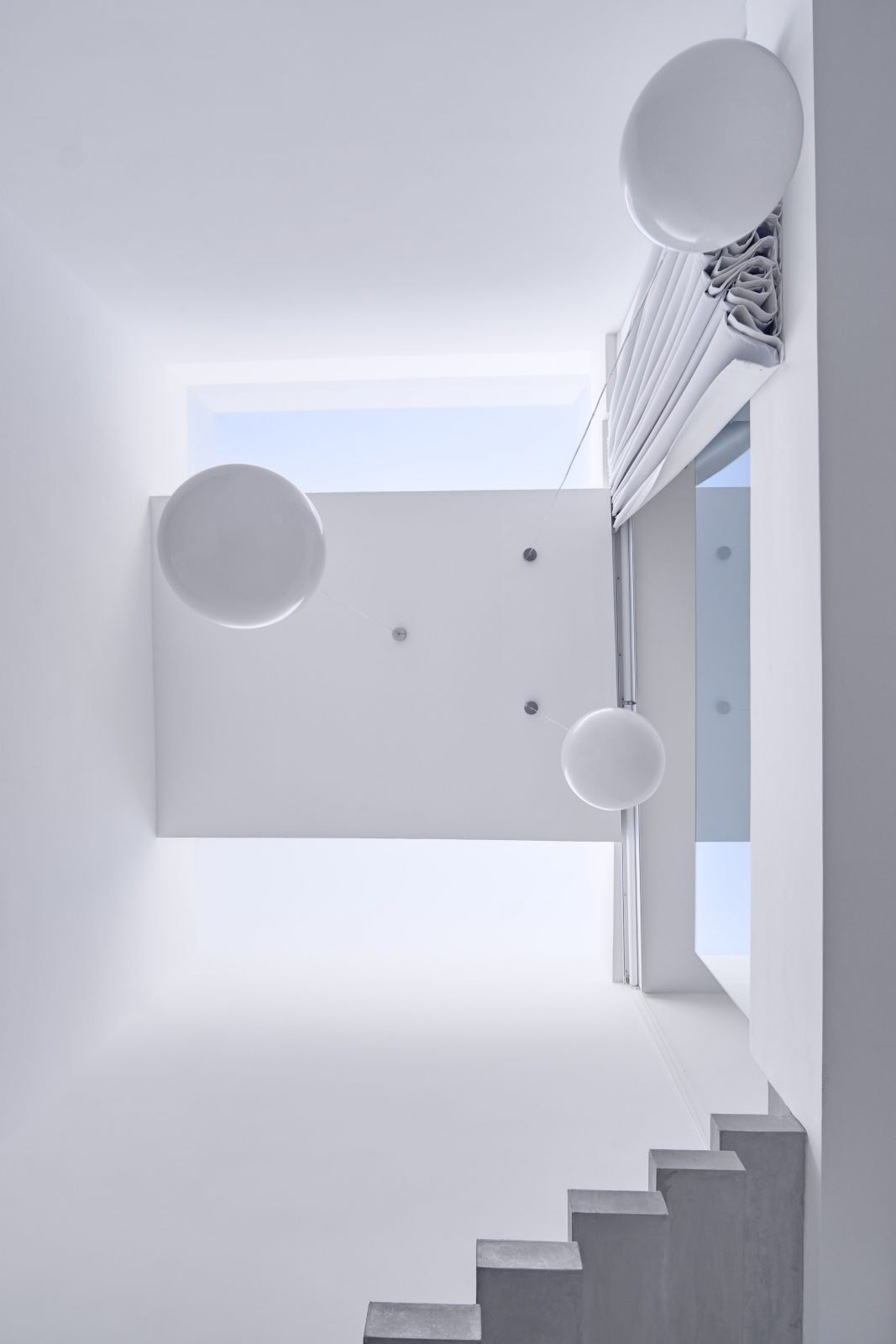 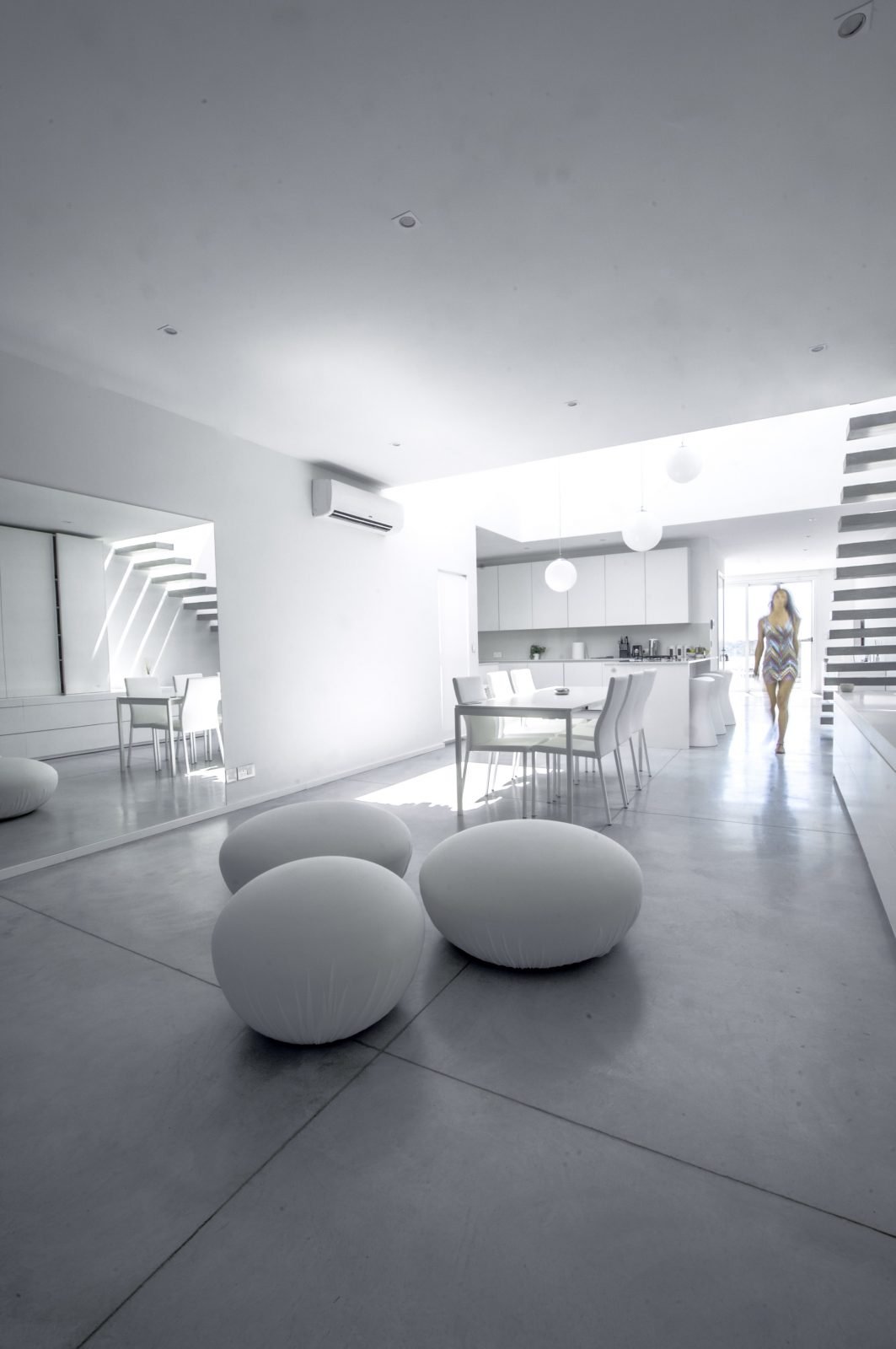 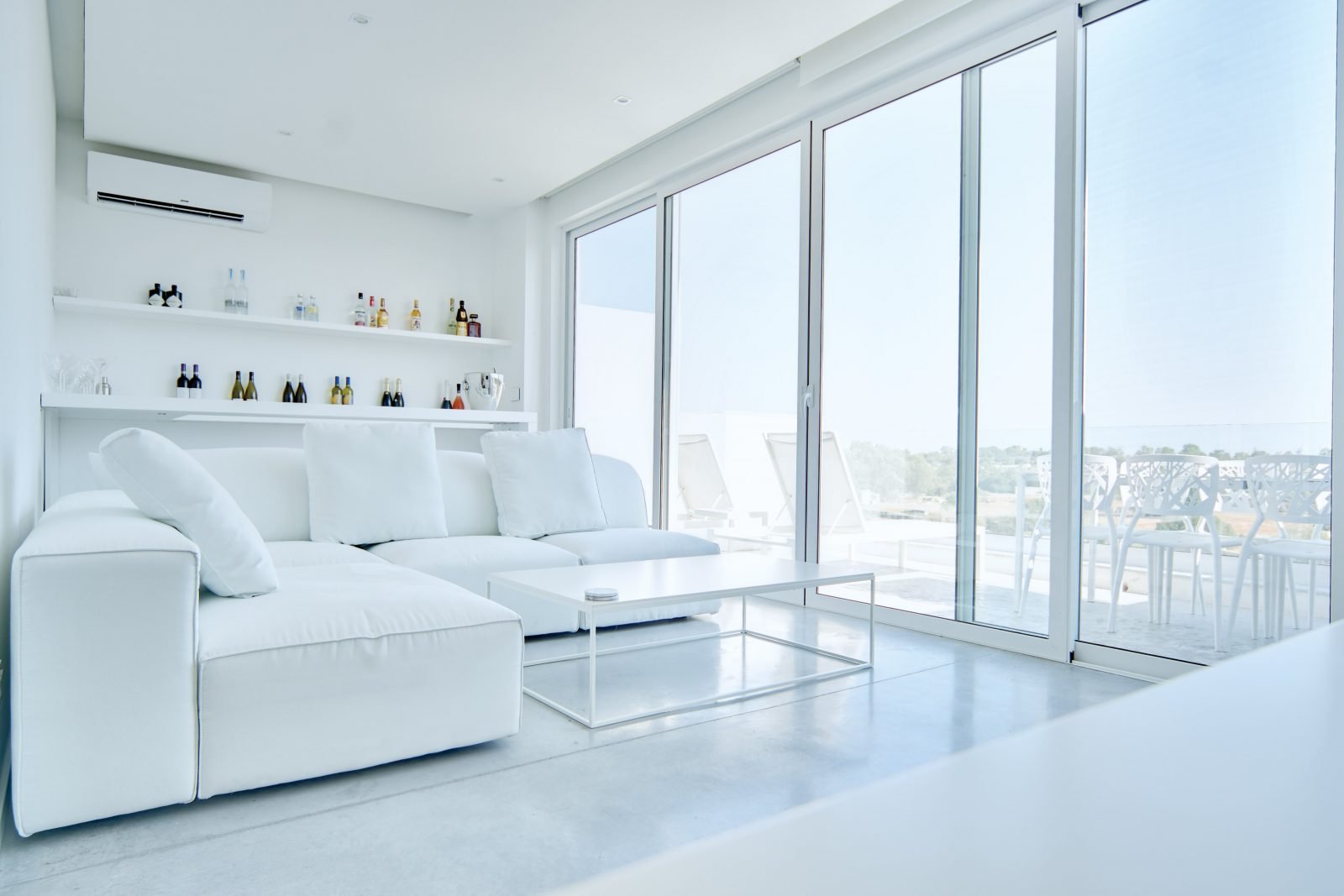 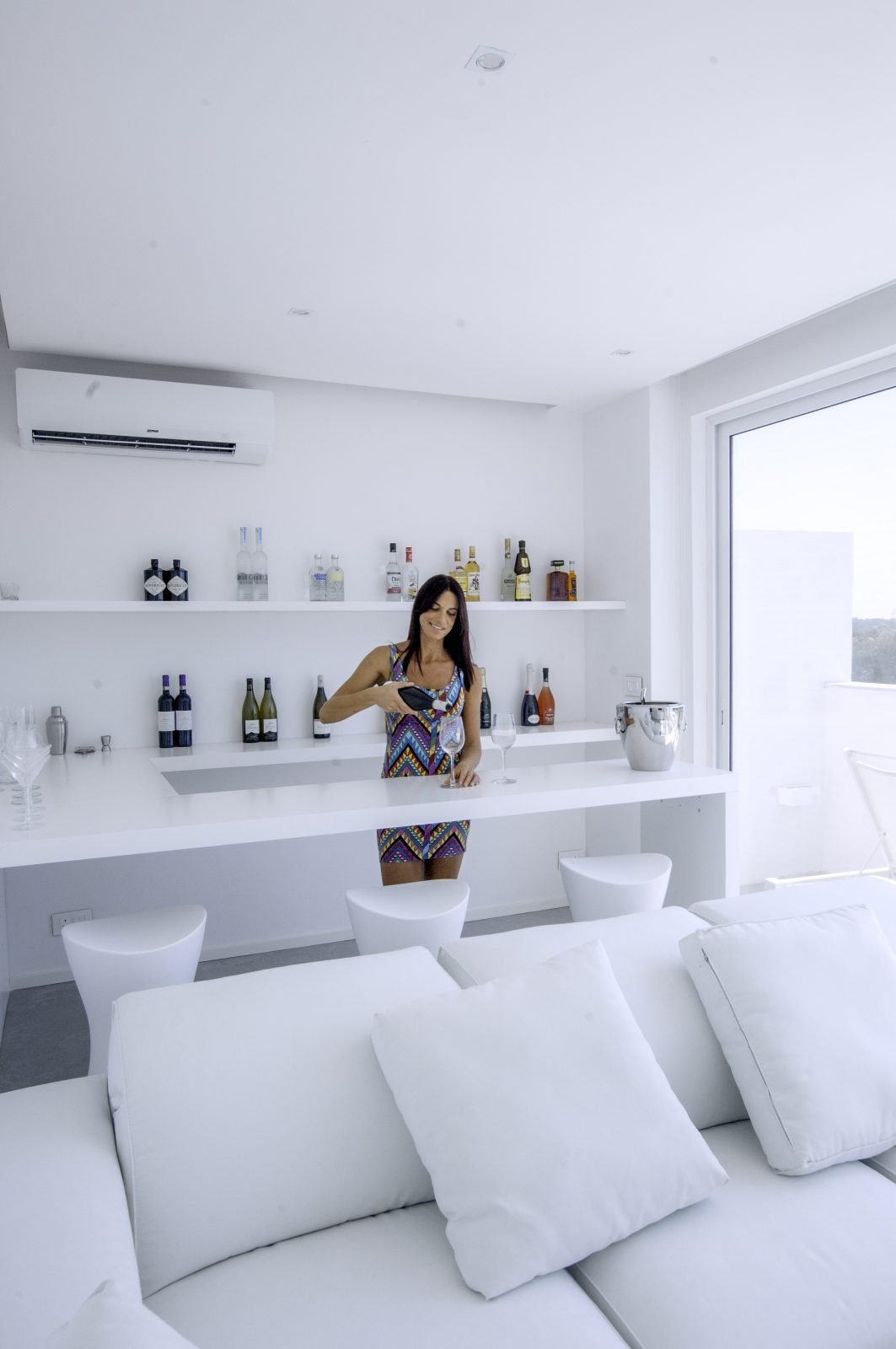 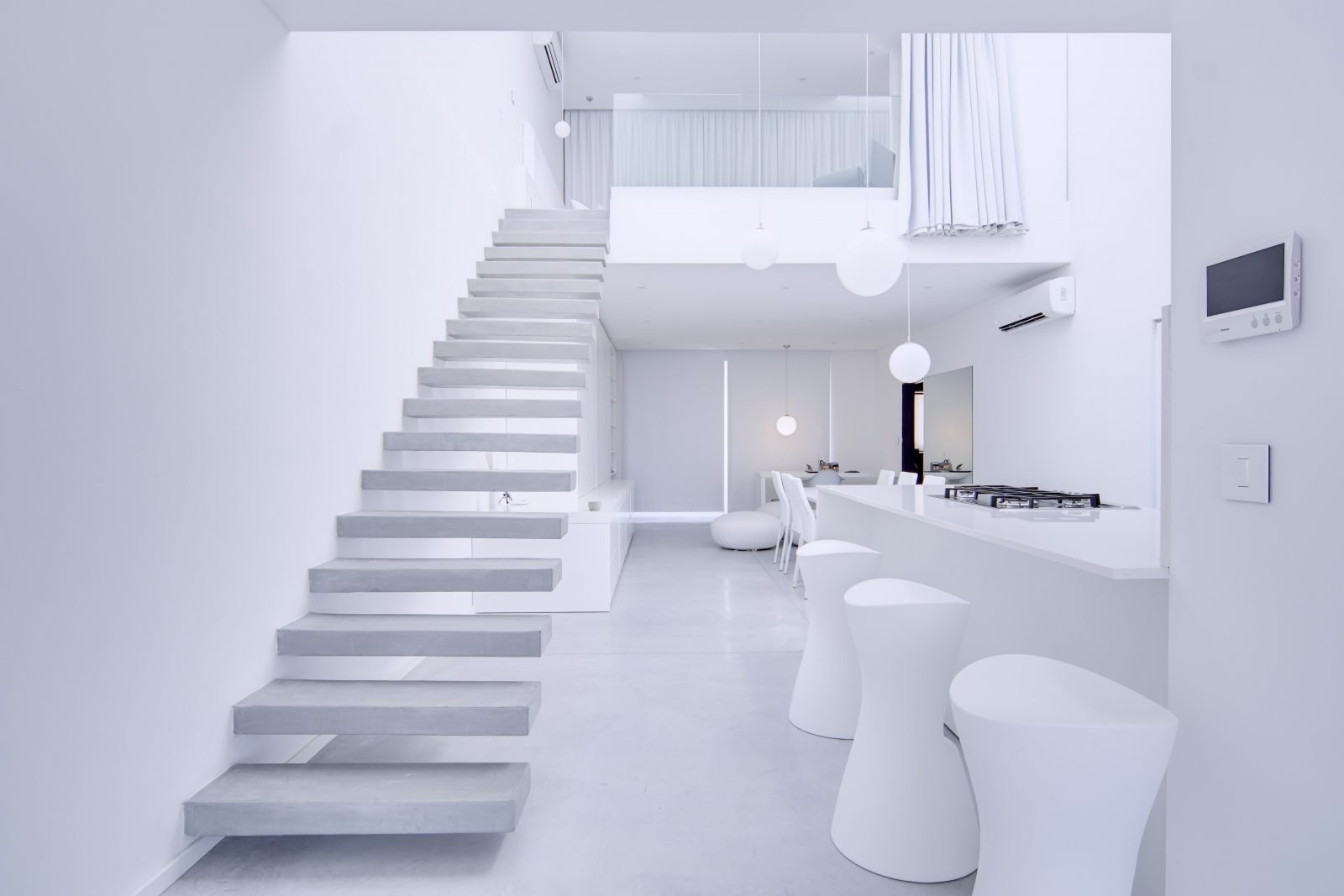 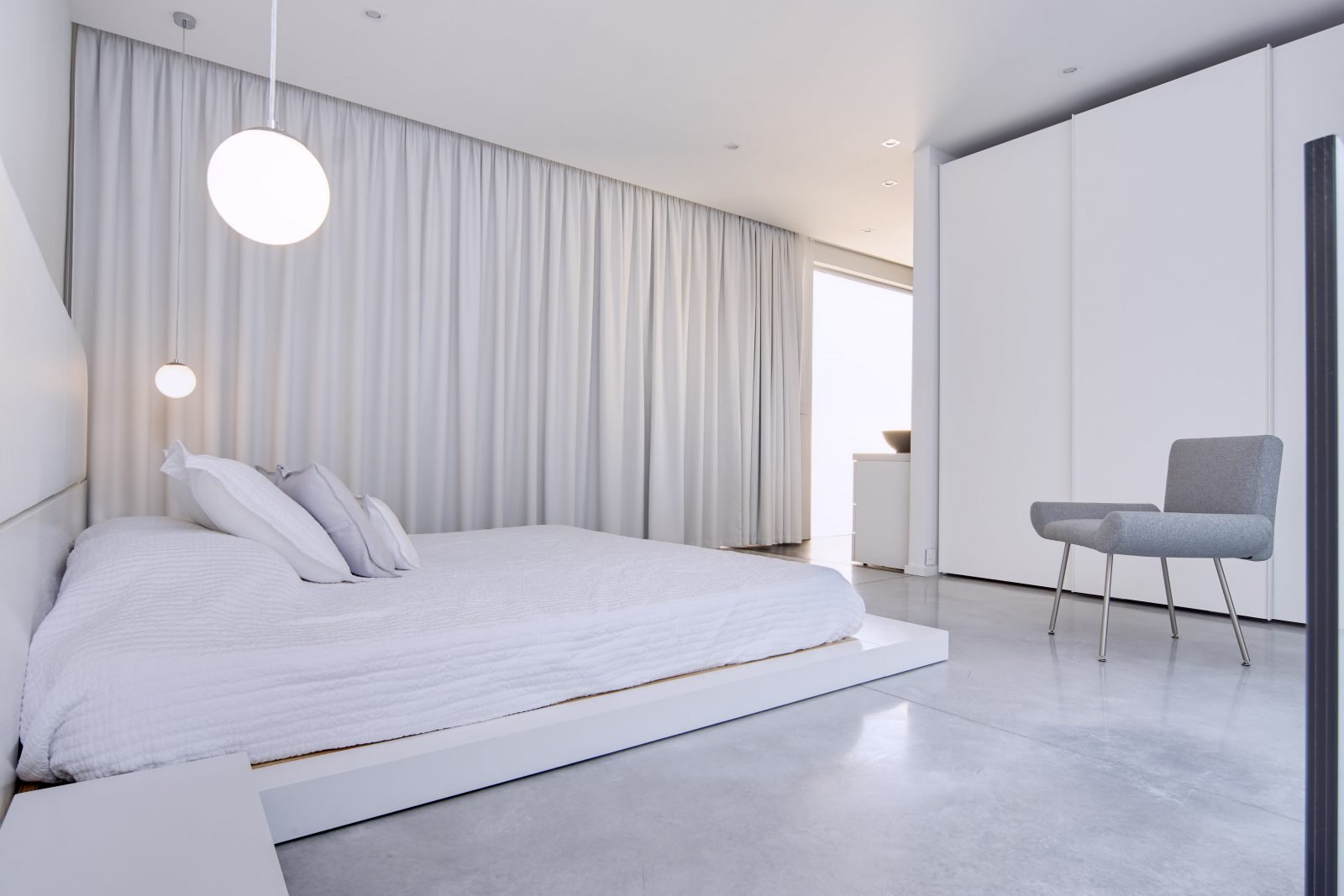 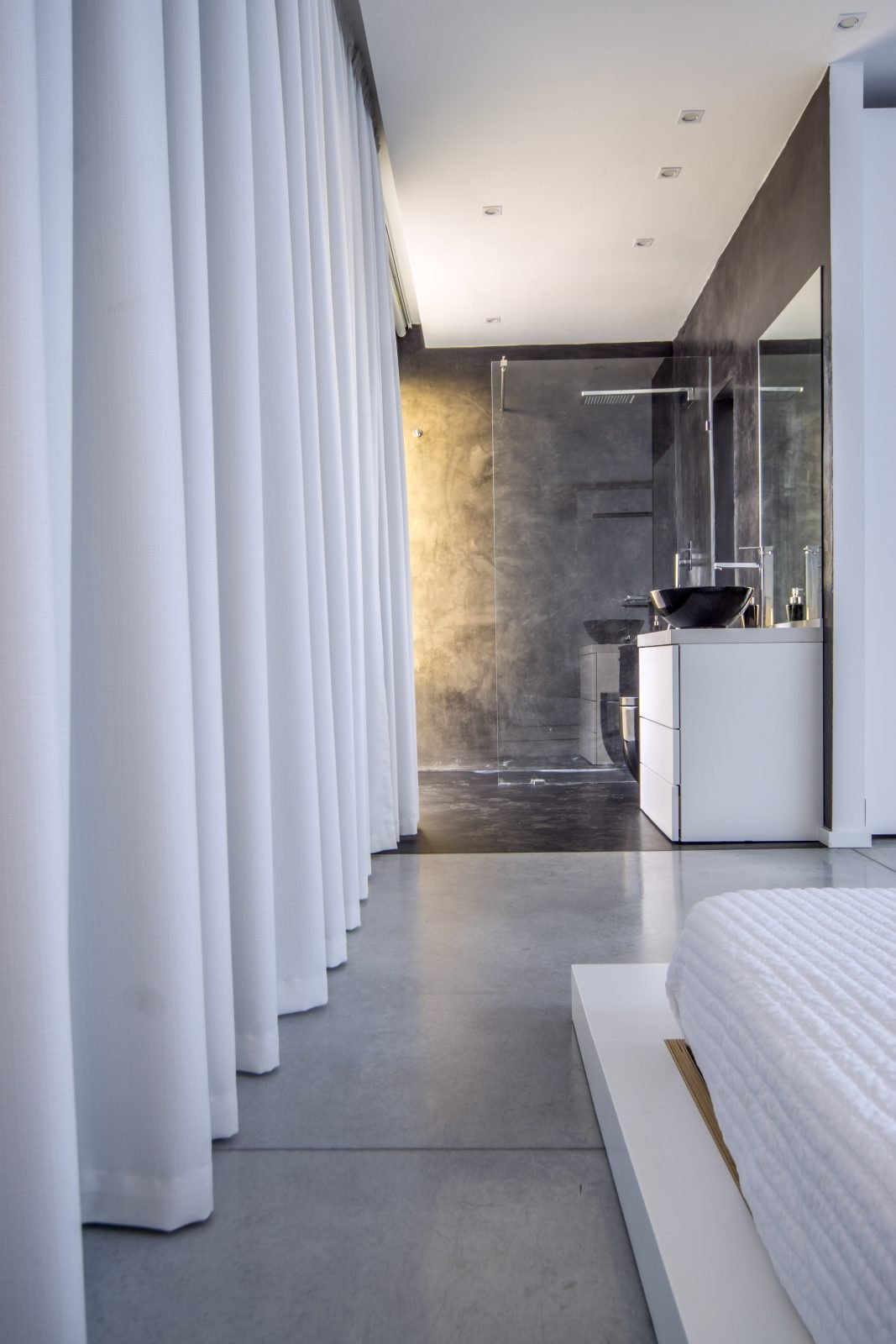 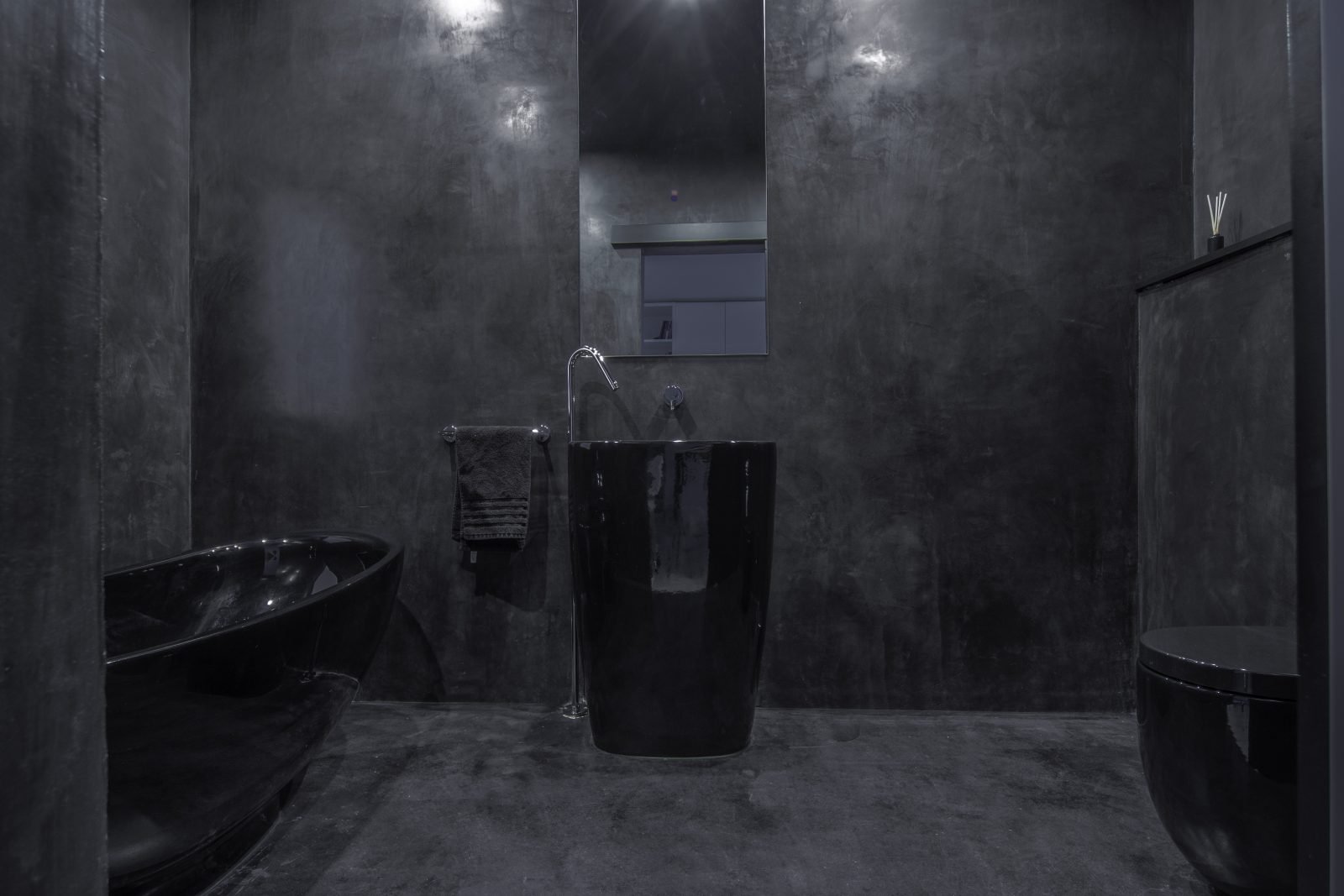 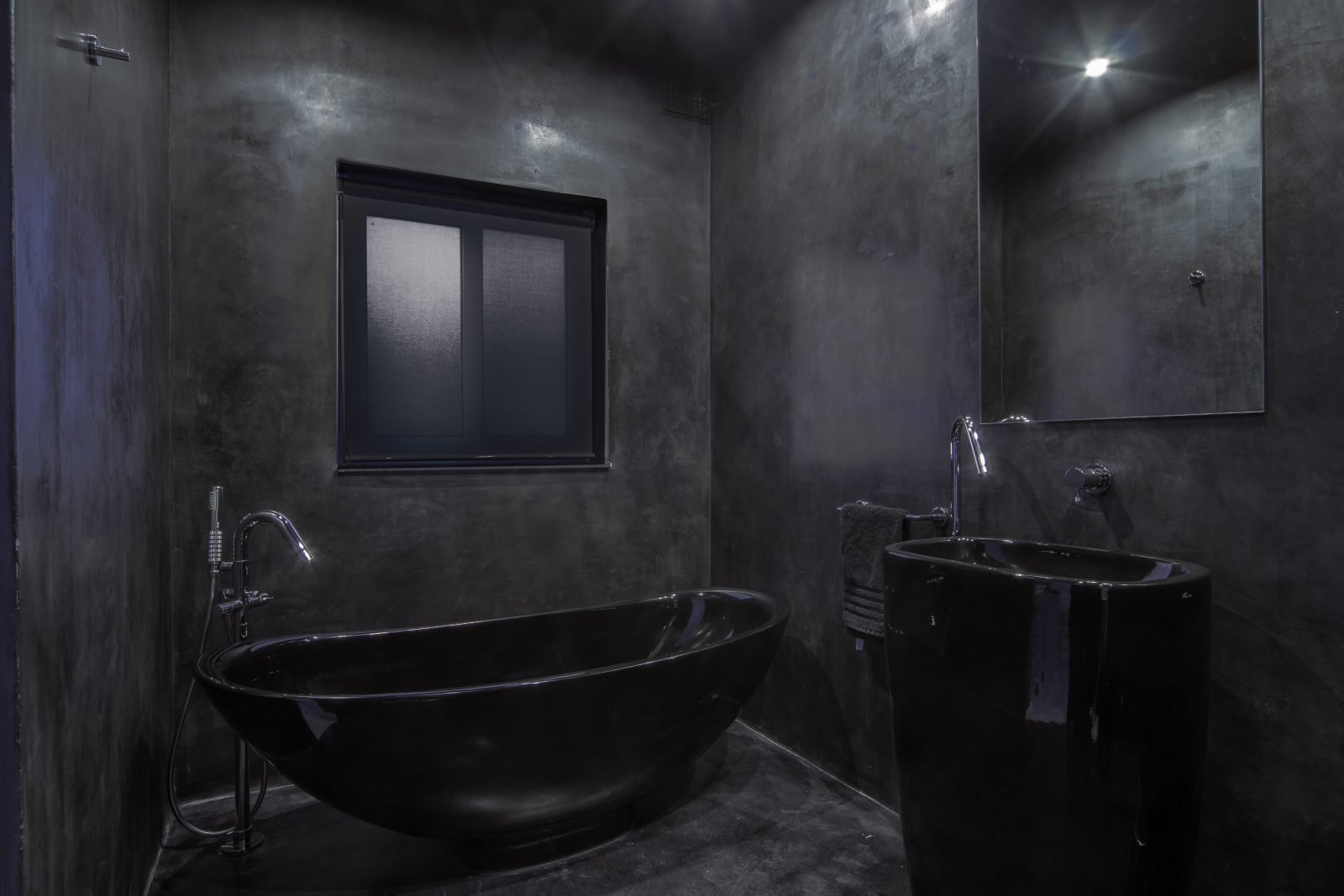