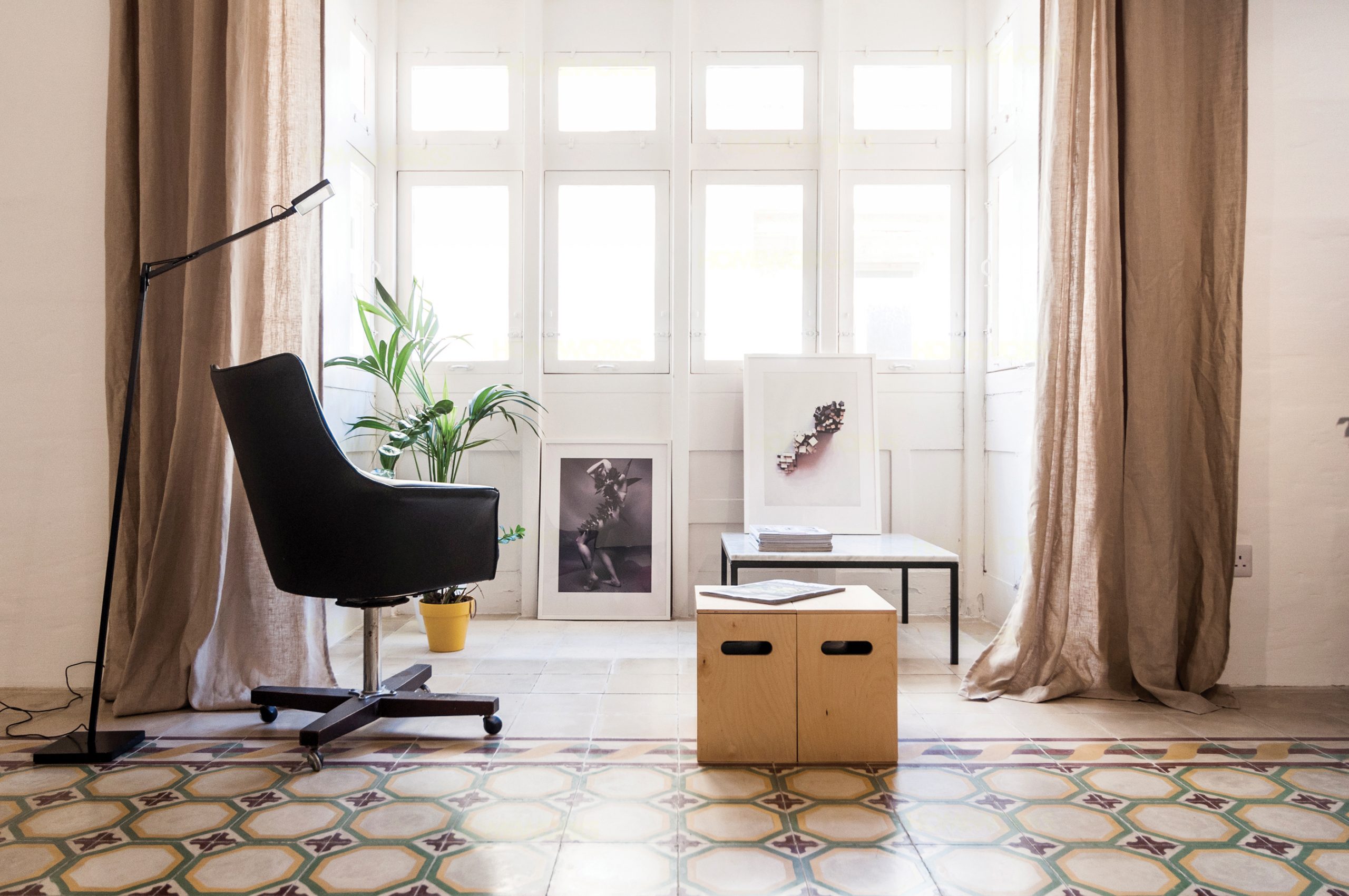 After making the three-story climb to the apartment for the first time, Architect Sandro Valentino explains how he was misled by the presence of two doorways on the stairwell landing – thinking that there were two apartments per floor. It turned out that on each floor of the block there was one apartment, each with two entrances – the reason for which was initially unclear.

The existing room configuration was also a little irrational. The main entrance led directly into a sitting room which was located towards the rear of the property and looked over the internal courtyard. This led to a large nondescript central room, the main function of which appeared to be a dining room-come-passageway, which in turn led onto a small kitchen and bathroom at the rear of the apartment. Two spacious bedrooms – which occupied the largest and brightest rooms – were located on the other side of the apartment overlooking St. Dominic Street. After examining the existing apartment layout, the function of the second doorway into the apartment suddenly became evident: the bedrooms were interlinked, therefore there was no way to access one bedroom without having to pass through the other unless one went out onto the landing in the apartment block stairwell.

‘Although the layout required certain interventions and alterations in order to be more suited to today’s living requirements, I remember being impressed by the nicely proportioned rooms, as well as by the amount of natural light which penetrated all corners of the property, which was one of the main factors that convinced me to buy the apartment.’

The crux of the renovation project was to shift the entrance from the sides to the centre of the apartment, as well as to mirror the current apartment layout – shifting the living areas to the front rooms, and the bedrooms and bathrooms to the back, whilst at the same time maximising storage space. It was therefore decided to close off the two apartment entrances and replace them with one central entrance. Apart from moving around some internal doorways, the structural alterations were kept to a minimum, as the original room volumes and proportions were something the architects wanted to retain.

One of the main interventions was the construction of a concrete mezzanine towards the back of the entrance hall, which had the dual function of lowering the bathroom ceilings whilst simultaneously creating much-needed storage space above. In order not to block the light entering the hall from the rear courtyard, a large window was opened, allowing light to penetrate through the storage mezzanine and into the entrance hall.

Two lightweight volumes were then dropped into the otherwise unnecessarily large entrance hall and one in the front room which was to contain the kitchen. These volumes increased in scale the closer they got to the more private areas of the apartment, leaving a breach in between them which was to serve as the entrance to the master bedroom. This intervention added a new dynamic, designed as evident additions to the property – their smooth finish which contrasted with the textured old walls. Two of these volumes were stopped short from the ceiling in order not to compromise the original volume of the rooms. Apart from the kitchen, these new spaces would serve to house a pantry (connected directly to the kitchen), a wardrobe, and two bathrooms, as well as helping to define the entrance hall.

This intervention allowed the two front rooms to be used as a living room and a kitchen/dining room, whilst the back rooms were converted into two bedrooms – with all the required ancillary facilities in between.

The apartment was practically gutted to allow for the new layout to come into being. Patterned cement floor tiles were carefully covered throughout the duration of the works, and polished once works were complete in order to restore their original colours and shine. A number of timber doors were re-located throughout the renovation process, with new doorways being opened up to match the dimensions of the existing door frames. The masonry blockwork texture on the walls was retained and white-washed to bounce as much light as possible throughout the apartment, whilst the ceilings and steel beams were painted in a light grey to create a restrained contrast with the walls.

Whilst aiding circulation around the apartment, the central entrance hall also served to highlight the dual aspect which came to exist within the apartment. Whilst the front rooms retained their original proportions and character, the master suite towards the rear of the property – accessed through a strategically placed ‘gap’ between the new lightweight walls – came to occupy a rather narrow, two-metre wide space which was previously occupied by the confined kitchen and bathroom.

Sandro: ‘This area – my favourite part of the apartment – was laid out in a linear, regimented, and functional manner; moving from the wardrobe to the shower cubicle, WC cubicle (which shares a double-sided wash hand basin with the shower), onto the bath, and finally the bed. In this space, finishes change from rough walls to smooth plaster, from ornately patterned tiles to timeless concrete, travertine, and timber – creating a sense of alienation and detachment from the rest of the apartment.’

Folding timber doors found within the property were meticulously restored and re-located to newly opened doorways in the living areas positioned near one another. A second doorway was opened up between the kitchen/dining room and the living room to maximise visual communication between the two spaces yet retain the original room volumes and proportions

A lovely Cararra marble top dining table acts as a reflector to the light coming in from the window, adding to the lightness of the space

The kitchen was inserted into a low, white volume within the dining room. The low splashback allows the kitchen preparation area to be concealed from the dining area and allows people within the two spaces to interact with each other. Black, exposed stove pipes were used extracting kitchen fumes to the outside, with the extractor concealed within a hanging white box over the kitchen. High storage is located within the pantry, hidden behind a large sliding door at the rear of the kitchen

Lightweight partitions were inserted into the newly positioned entrance hall to conceal storage towards the sides and bathrooms at the rear. Bathroom ceilings were lowered to create a storage mezzanine that serves as a vertical skylight to illuminate the entrance hall. The master bedroom is accessed through a ‘breach’ in between the new partitions

The bedroom suite was designed as a progression of spaces, from the wardrobe to the shower and WC cubicles, the bath, and finally the bed. Materials are limited to concrete, timber, and light-coloured plaster

The bed replaces the bathroom which previously existed within this space. The narrow width of the room allowed for a bed to be fitted between the walls elevated on a raised timber platform which conceals additional storage Image ©Ellie Cutajar

A bath clad in timber and travertine was positioned at the foot of the bed, partly sunken within the raised floor. Image ©Ellie Cutajar

Moroccan tadelakt polished plaster, travertine and concrete were used as finishes within the spare shower room and guest, with an old wooden ladder, adapted into a towel hanger

A narrow vertical strip window was cut into the wall to filter light into the main ensuite, accentuating the texture and qualities of the cross-sawn travertine used on the floor and walls of the room, in sharp contrast with the black fixtures, fittings, and shelving. A wash hand basin in cross-sawn travertine was positioned between the WC and shower cubicles, allowing it to be accessed from both spaces 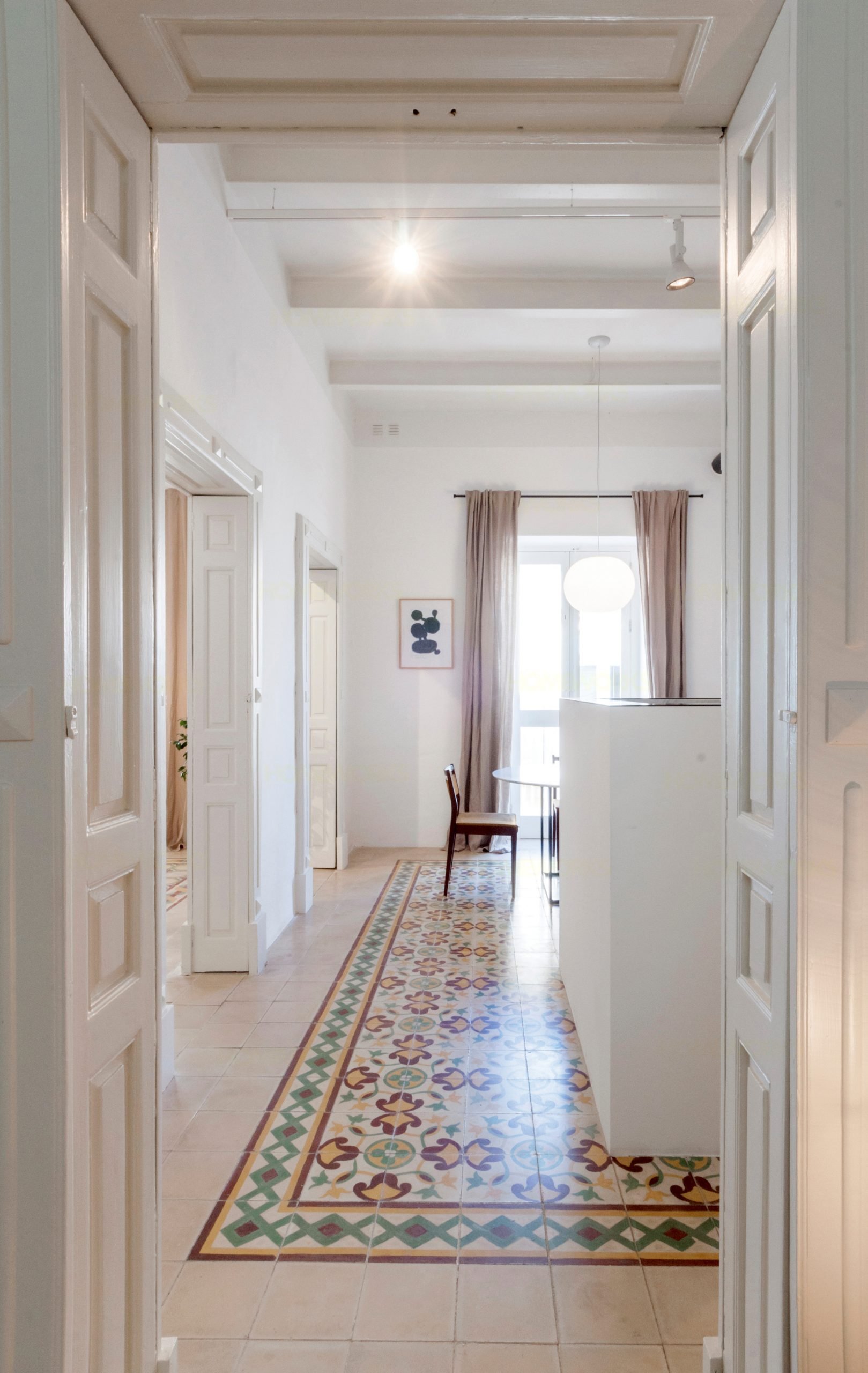 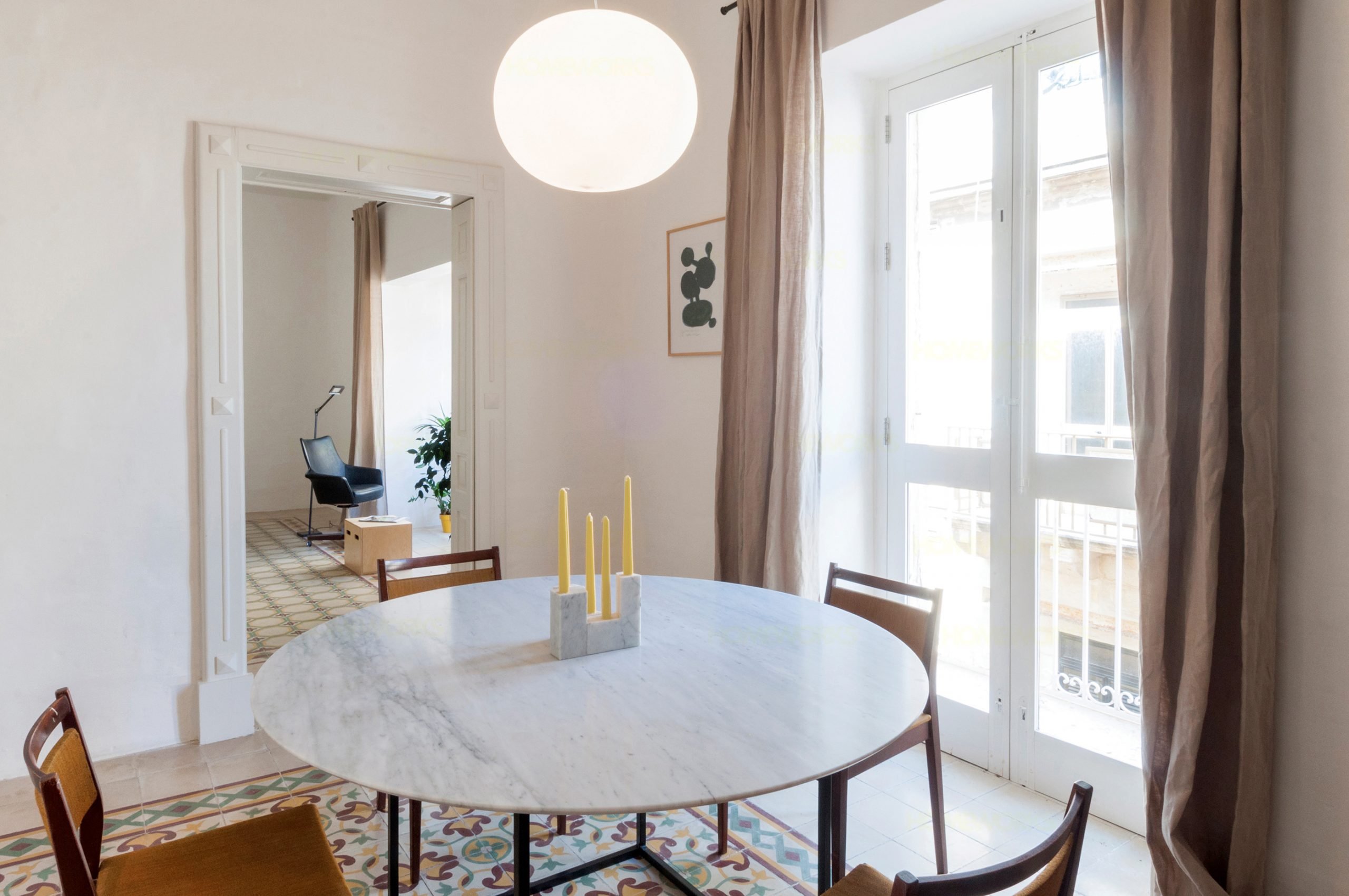 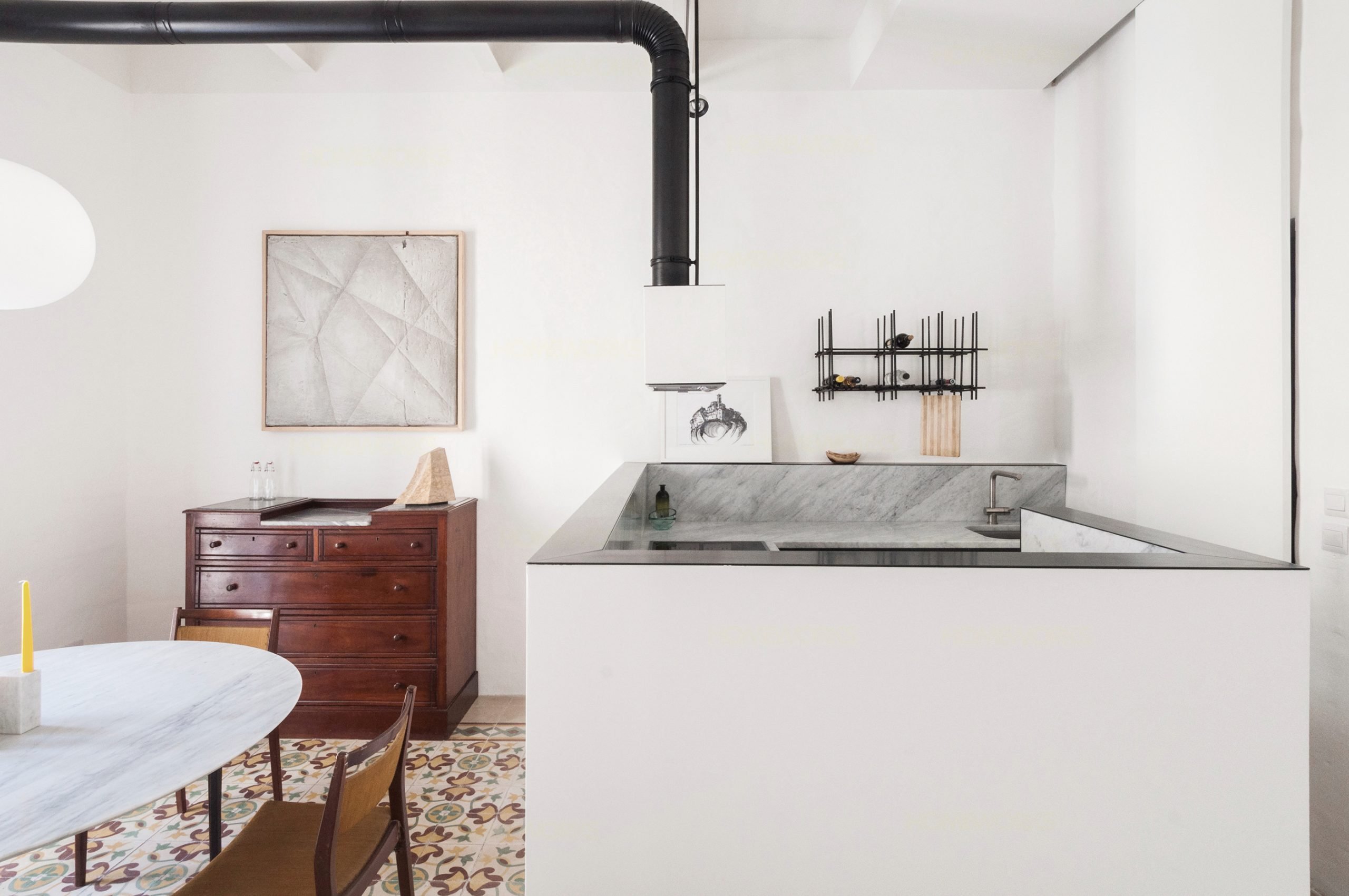 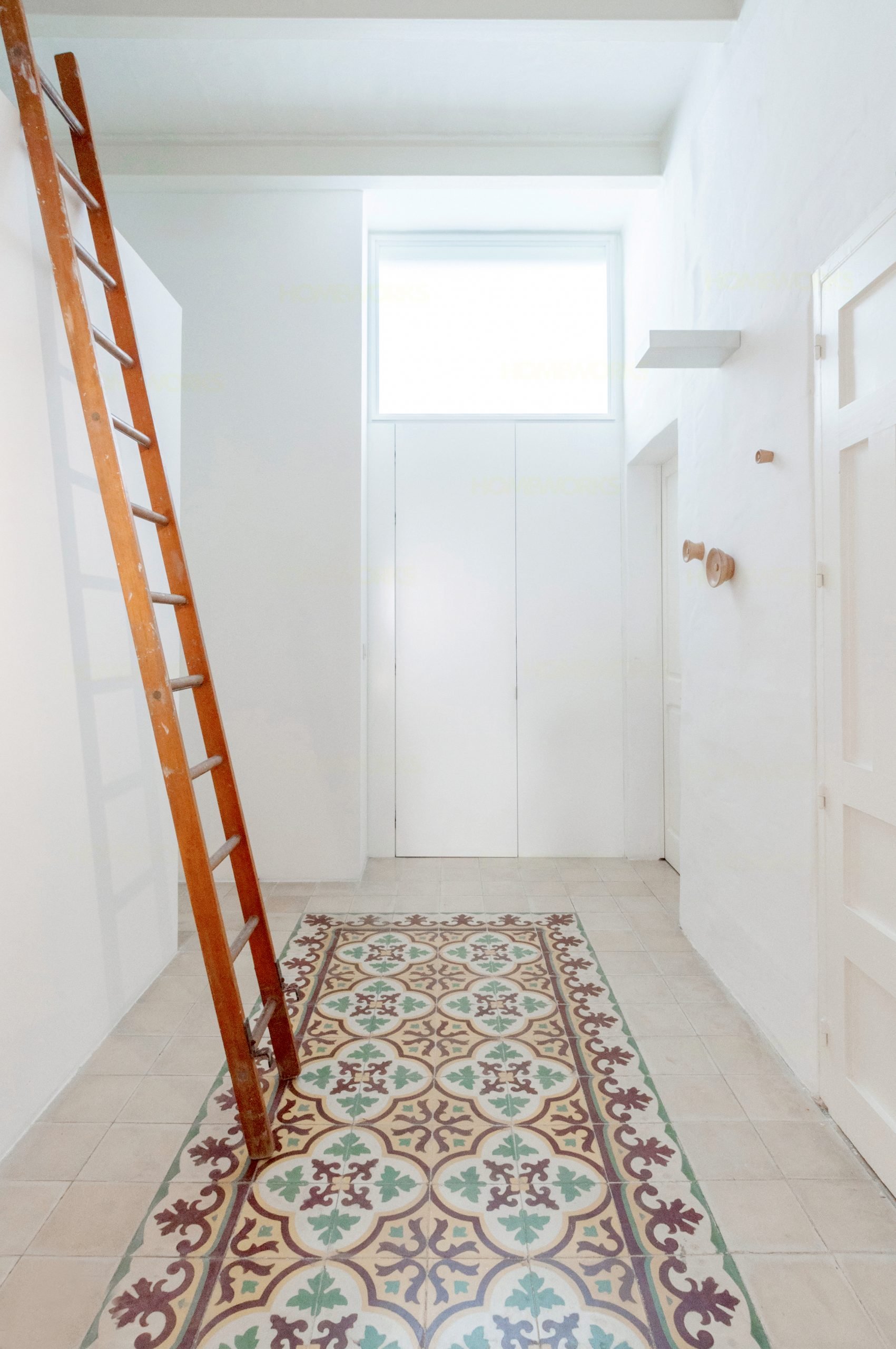 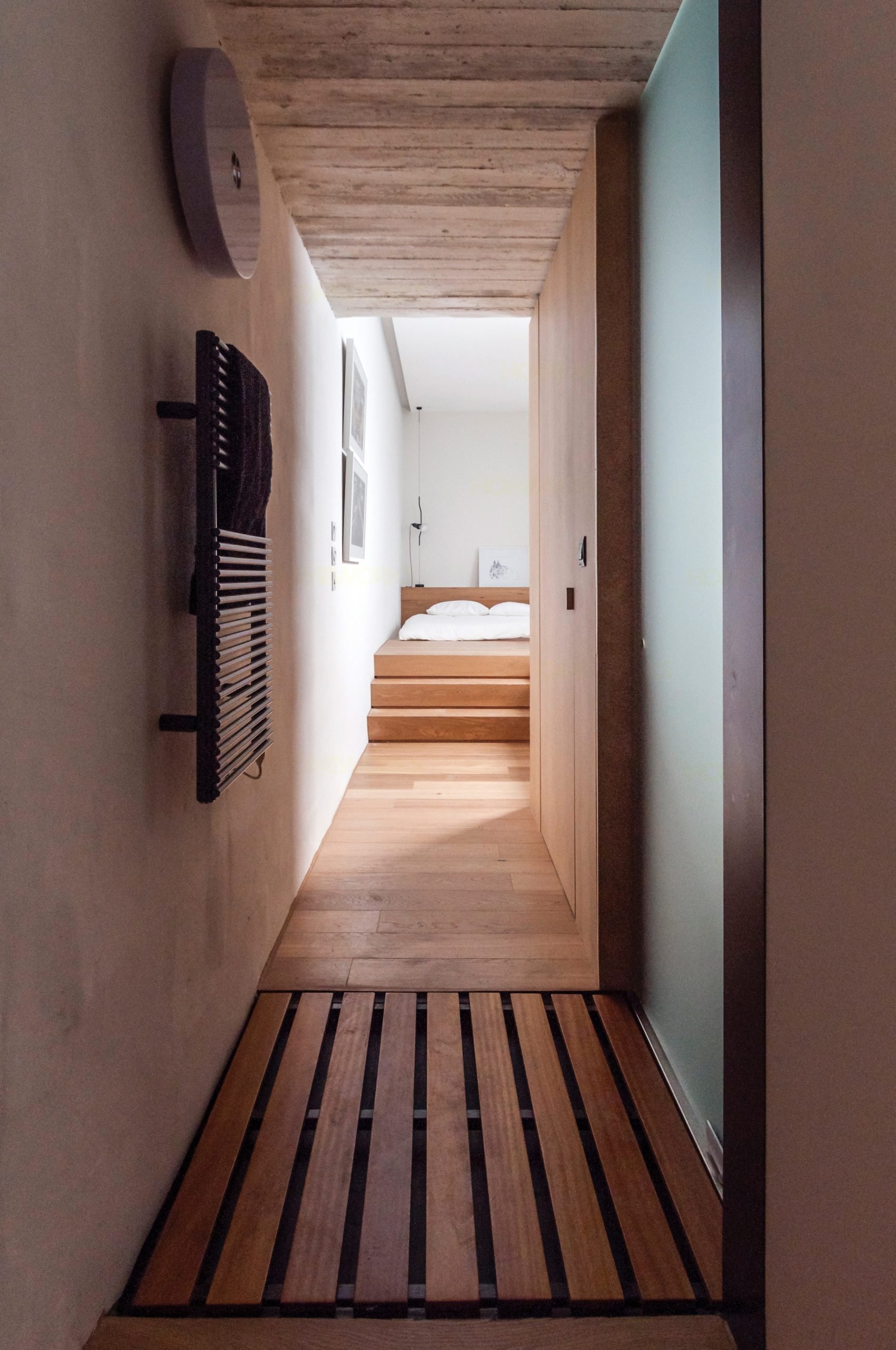 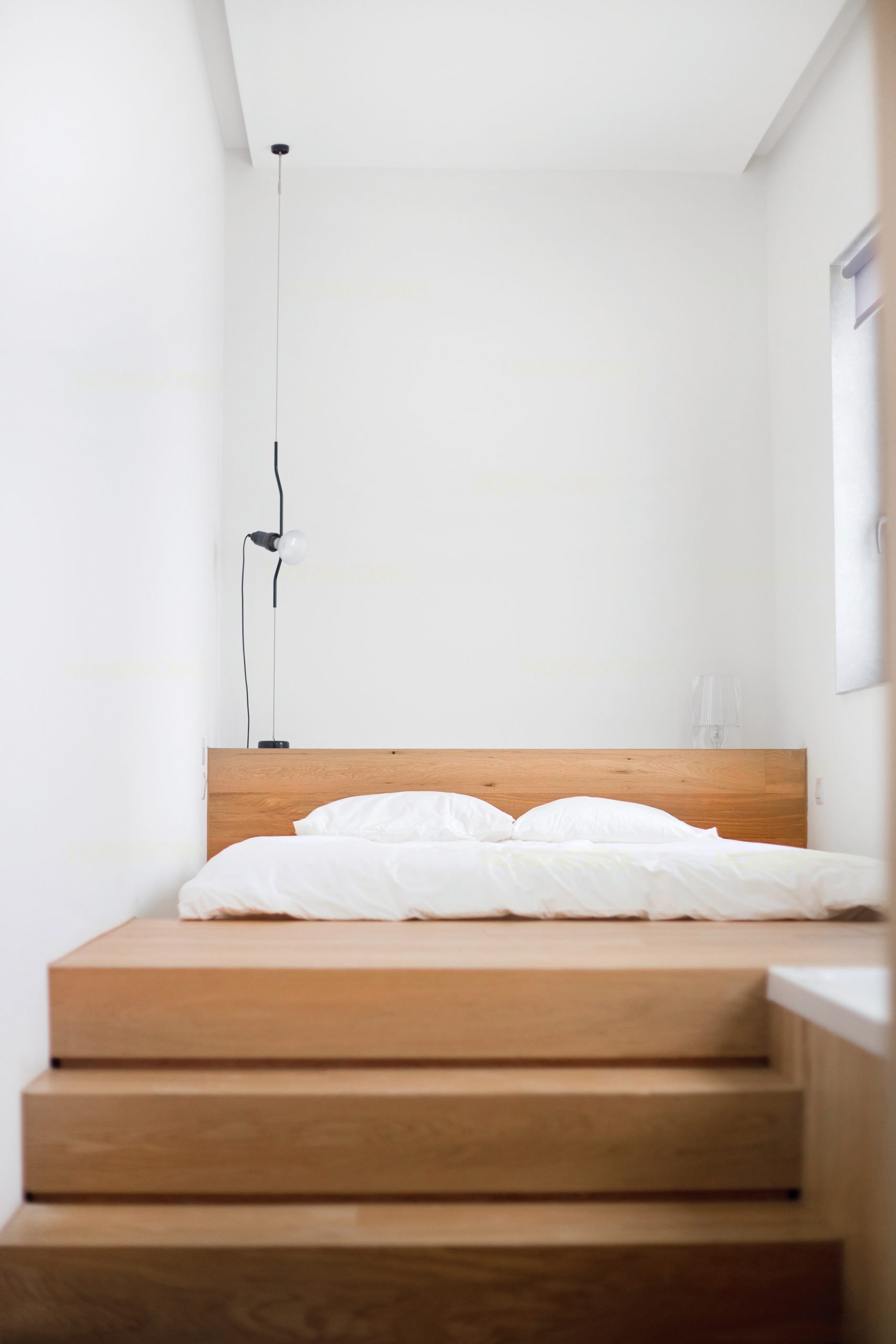 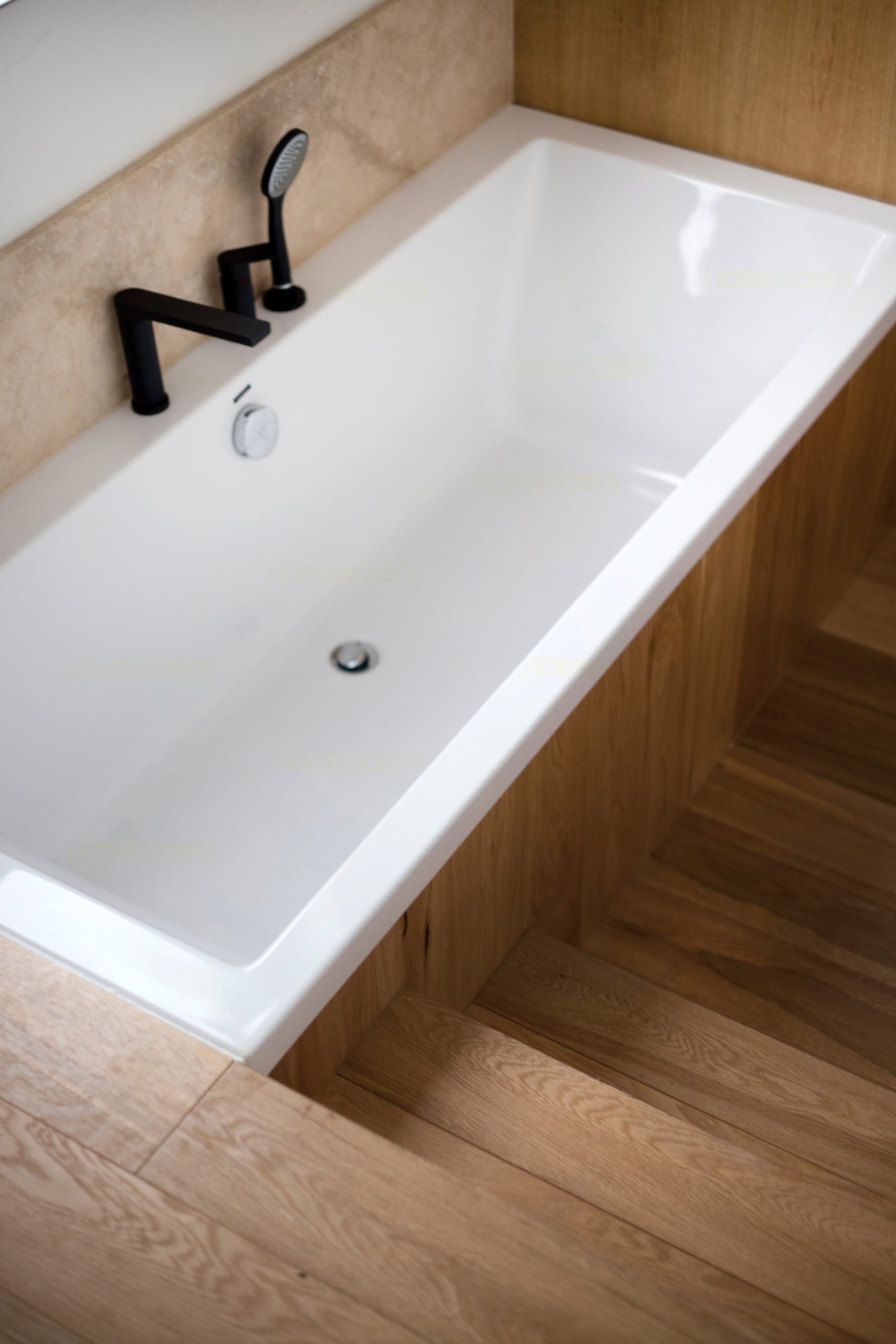 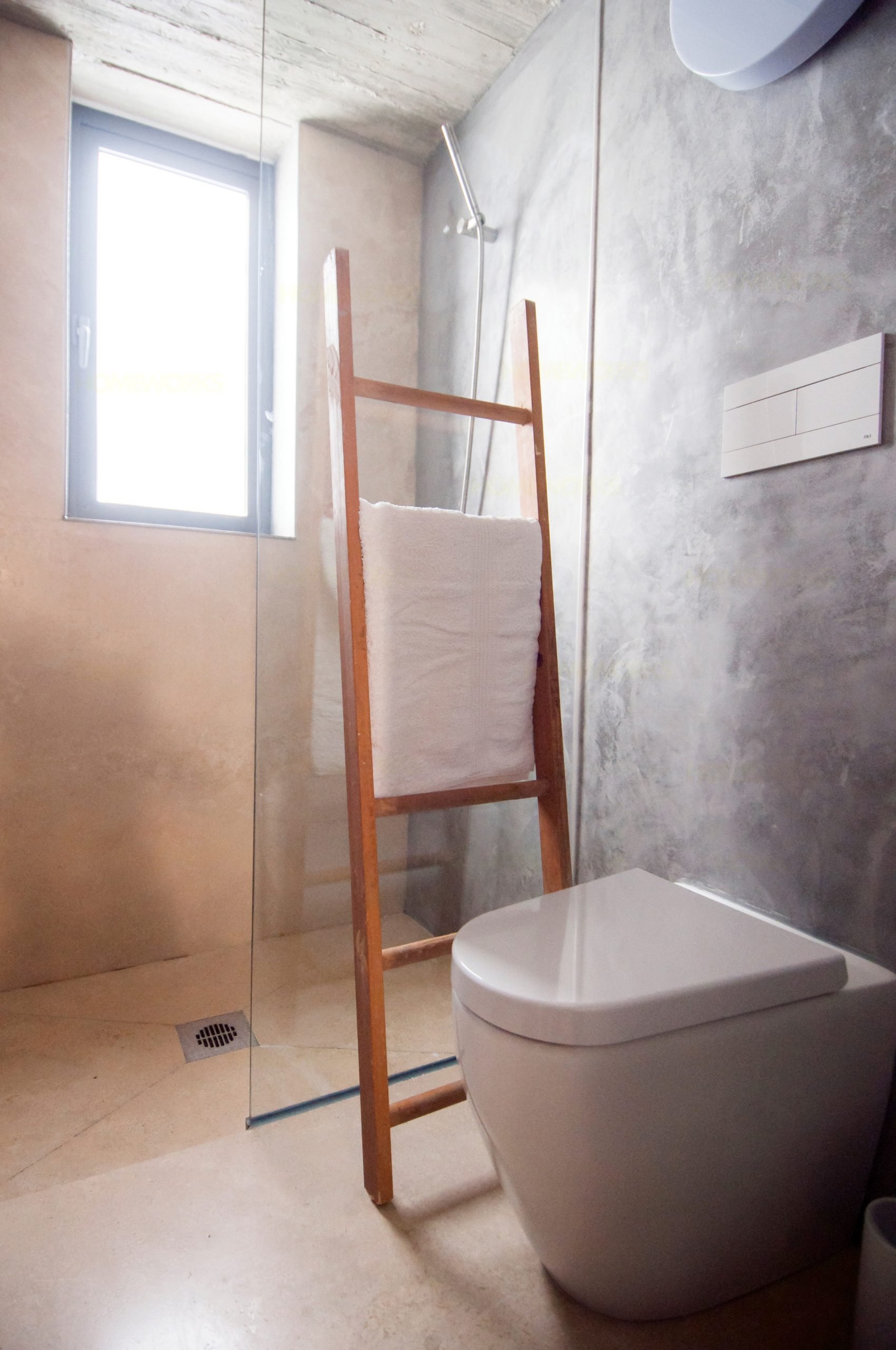 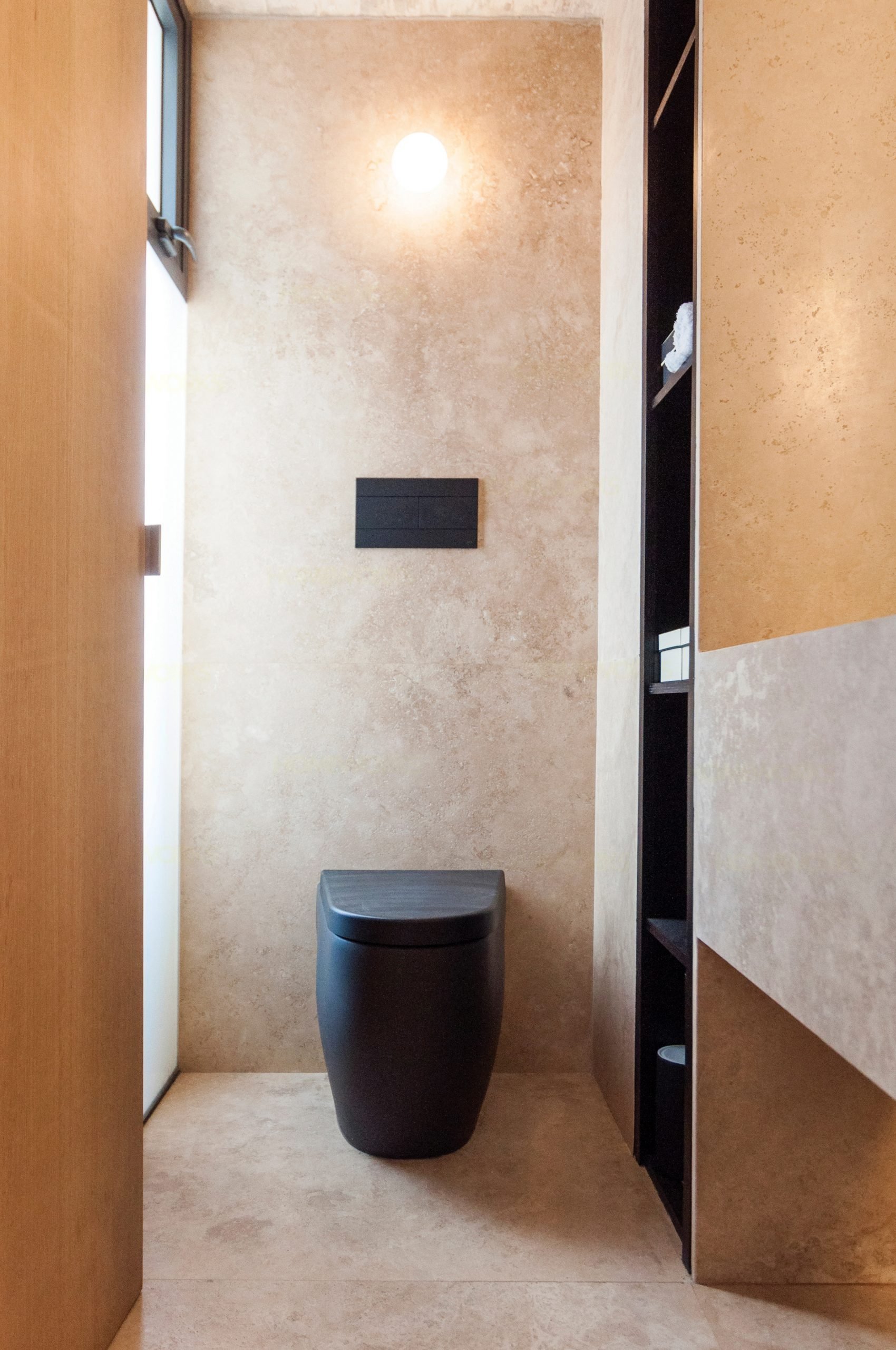 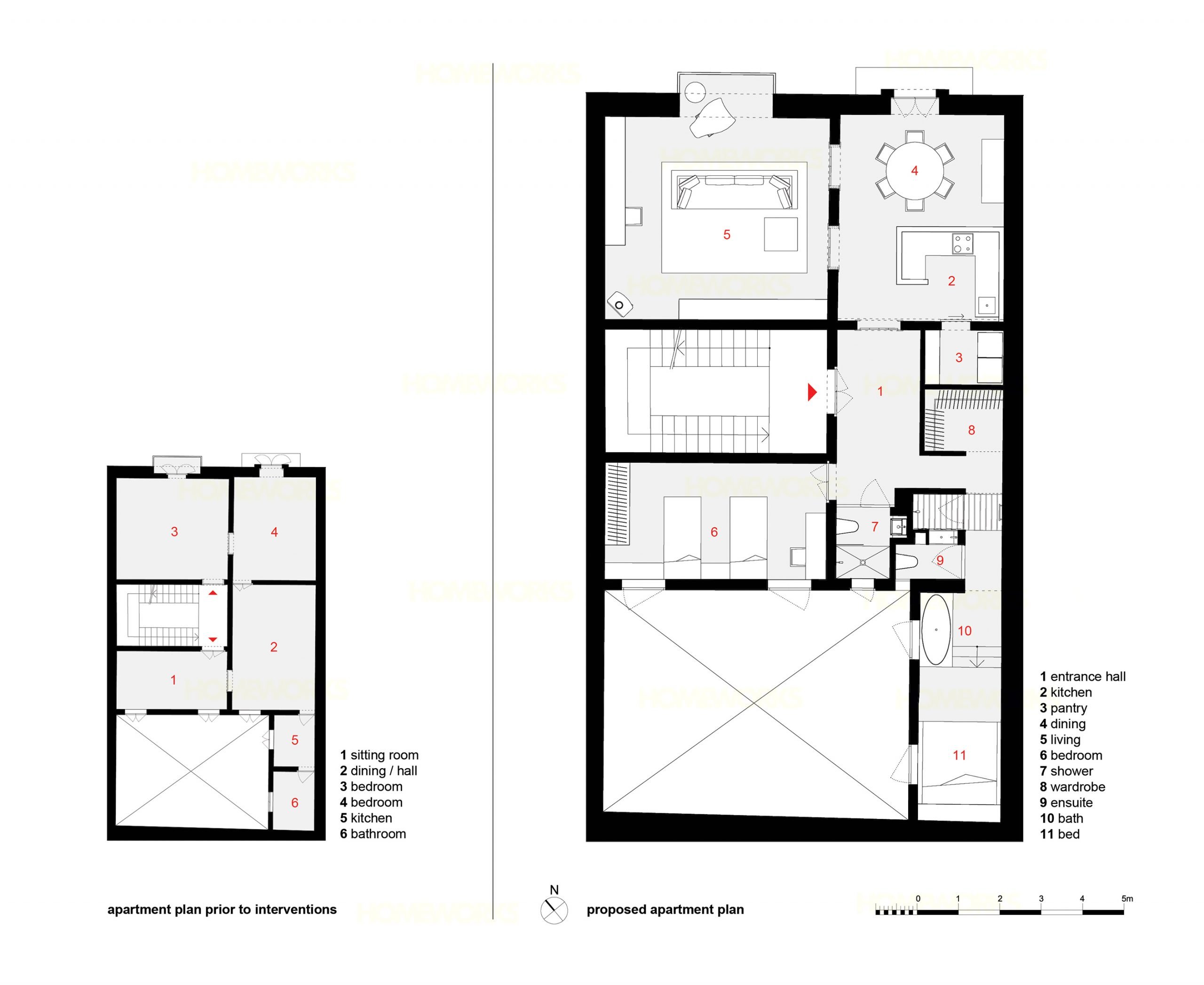 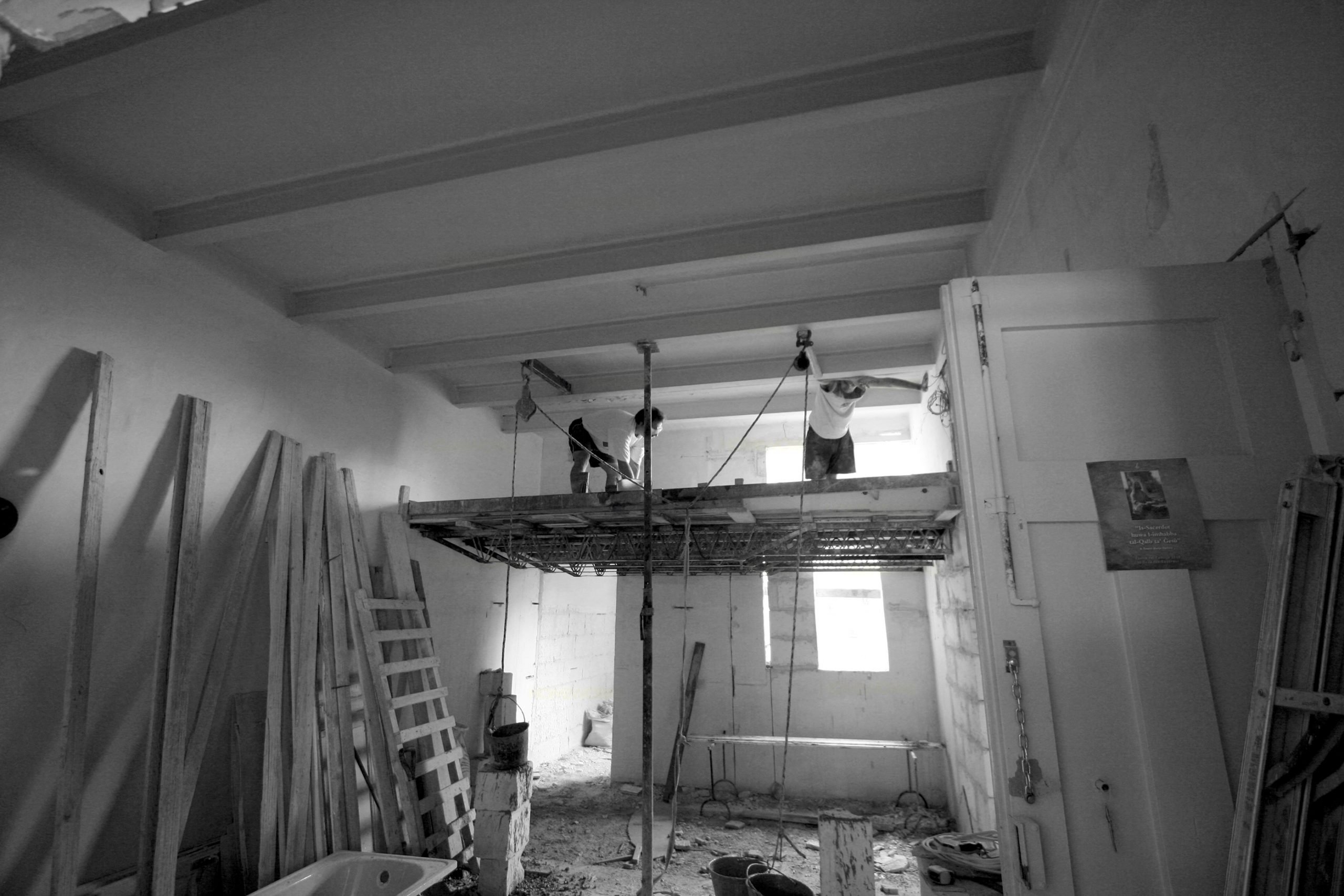