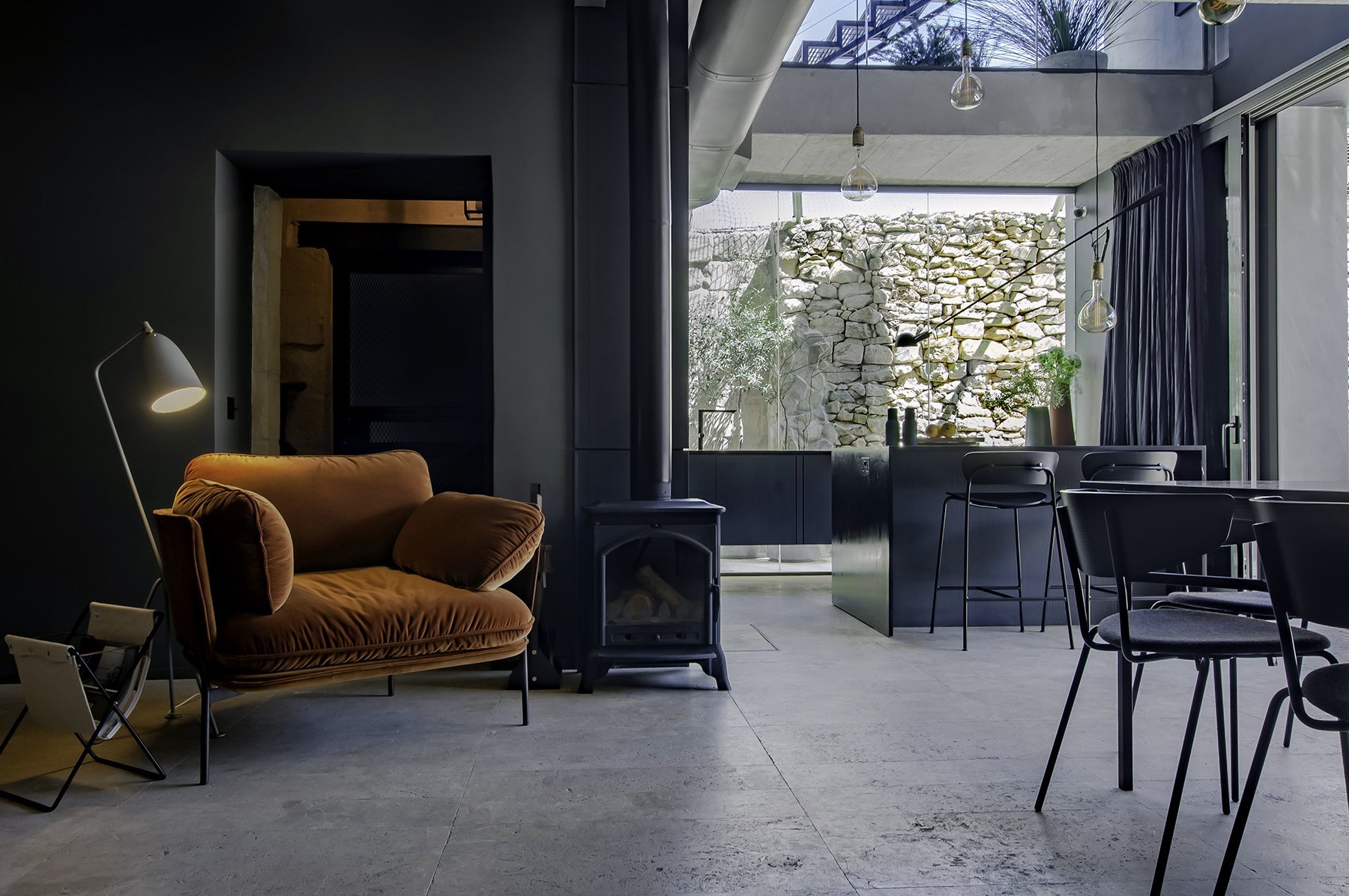 It’s not often a house is designed around a pair of wildcats, but this is certainly the story of this home. The design is made to suit not just its human residents Martin Przepiorka and Darren Darmanin, but also their two wildcats, Vladimir, an African serval, and Savvy, a serval and domestic cat mix.
‘Always, the first consideration was whether it was cat-friendly,’ says Martin. ‘The whole concept, from the beginning, was for the cats to roam freely around the house – we’ve also incorporated hiding spaces for them, and had shelves made for them to jump on. It’s also why we’ve used a lot of natural materials, such as stone and wood.’

‘Legally, we are living in a cage – all the walls are over 2.5m high and have safety nets all around’

More complicated was incorporating the legal requirements that ensured the house would be the equivalent of a cage to house the cats, in particular Vladmir who is a purebred. ‘Legally, we are living in a cage – all the walls are over 2.5m high and have safety nets all around, we have metal frames and mesh internal doors, an outdoor area with shade which resembles in some way their natural habitat, a double door system, plenty of water for hot days and plenty of plants they can eat and nibble throughout the day,’ says Martin.
However, it was not just about the felines; Martin and Darren also wanted a home that was right for them. When they bought the two-storey house in Qormi three years ago, it was a series of small and rather dark rooms and the couple were clear they wanted a modern house that incorporated features such as a library, walk-in wardrobe, and gym, as well as space for them and for guests.
Tasked with meeting all these requirements was architect Melissa Giordimaina of MMK Studio. ‘It was a demanding brief as the space was quite tight especially when considering the need for a guest bedroom and bathroom, and the pool,’ says Melissa.
She made it work by extending the house to create a large open-plan ground floor space that contains a library corner, complete with an armchair for reading, along with the living room and kitchen. This overlooks the outdoor area that wraps around the side and back of the house.
Also on this ground floor is a bathroom, hidden behind a seamless door, and beyond it the guest bedroom. Upstairs are the private spaces. ‘We went beyond the Maltese way of wanting every room to be large,’ says Melissa.
‘We had to compromise on the size of the rooms to fit everything in, but there was enough for what was needed. Above the kitchen is a double-height void that takes space from the main bedroom, but the room is still large enough, and the double volume makes an enormous difference to the feel of the kitchen’.
Outside, Melissa took from the existing large garden and thought outside the box, cantilevering the terrace off the dining room, which overhangs the pool. ‘The clients were open to the suggestion that the pool touches the house – it was the only way I could fit it in as well as the rooms they wanted,’ she says.
Inside, the decor is a merging of styles. ‘At first, we thought to have a Spanish villa style with shutters but Melissa convinced us to go modern,’ says Martin, who studied interior design and relished the chance to flex his design muscles.
Taking this as a starting point, they were inspired by the New York loft look which can be seen in the exposed beams and air-conditioning duct; these fit well with the metal mesh doors and concrete ceiling. A metal staircase, seen from the inside, leads to the roof which is in the process of being transformed into a garden.
The house is very much a mix of old and new – the old stone walls give character and a sense of the past but are lifted into modernity by contemporary fittings, with selected vintage items helping to bridge the eras.
Art also plays a major role with the walls filled with mostly Martin’s artworks. It’s one of many personal touches in the house which includes Darren’s father building the kitchen. ‘We quite often designed and created some of the interior and exterior elements with our hands, for example, the concrete sink in the bathroom, a stone fountain with fresh water for the cats in the garden, and some of the light features,’ says Martin. ‘That’s why this space is so personal and we are so proud of it, this is truly our home’.
For Melissa, the charm of the house is its unexpectedness. ‘It’s down a tiny alley with a humble entrance – you wouldn’t expect there to be such a contemporary house behind it,’ she says.
‘It’s my favourite place in the world,’ continues Martin. ‘After a hectic day, it’s an oasis of quiet and green, the perfect place to relax with a glass of wine’.
And as for the cats, they think it’s purr-fect.

An extension allowed the creation of a spacious open-plan living area. The old stone walls, although outside, add texture and visual interest

Step through the front door and into the corridor decorated with Martin’s artworks. At the end, the corridor opens out into the main open-plan space

The gallery wall features art along a theme. The letter D in red injects colour that catches the eye and breaks up the angular frames

Perfect for the cats to leap onto, the metal shelving is teamed with a vintage table for an interesting and eclectic look

Adjacent to the reading area, this stylish bathroom is neatly concealed behind an abstract wall fresco painted by Martin

Darren’s father built the kitchen. ‘This space was so important for us, we didn’t want to just order it from somewhere,’ says Martin

The pool abuts the house - the extra metres gained by doing this was the only way to fit in the pool.

Shallow steps allow the wildcats to enjoy the water. Darren made a small solar-powered water fountain to keep the water fresh during summer days

A traditional-style free-standing roll-top bath is in the bedroom. 'The open space makes taking a bath more relaxing,' says Martin

Stylish fittings are found throughout the house

The storage shelves were made bespoke by a local metal worker

The room, housing both elements, is on the other side of a wall to the bedroom.

The double vanity is spacious and smart

A wooden sculpture of a horse, circa 1900s, combined with the exterior metal staircase create a striking visual vignette 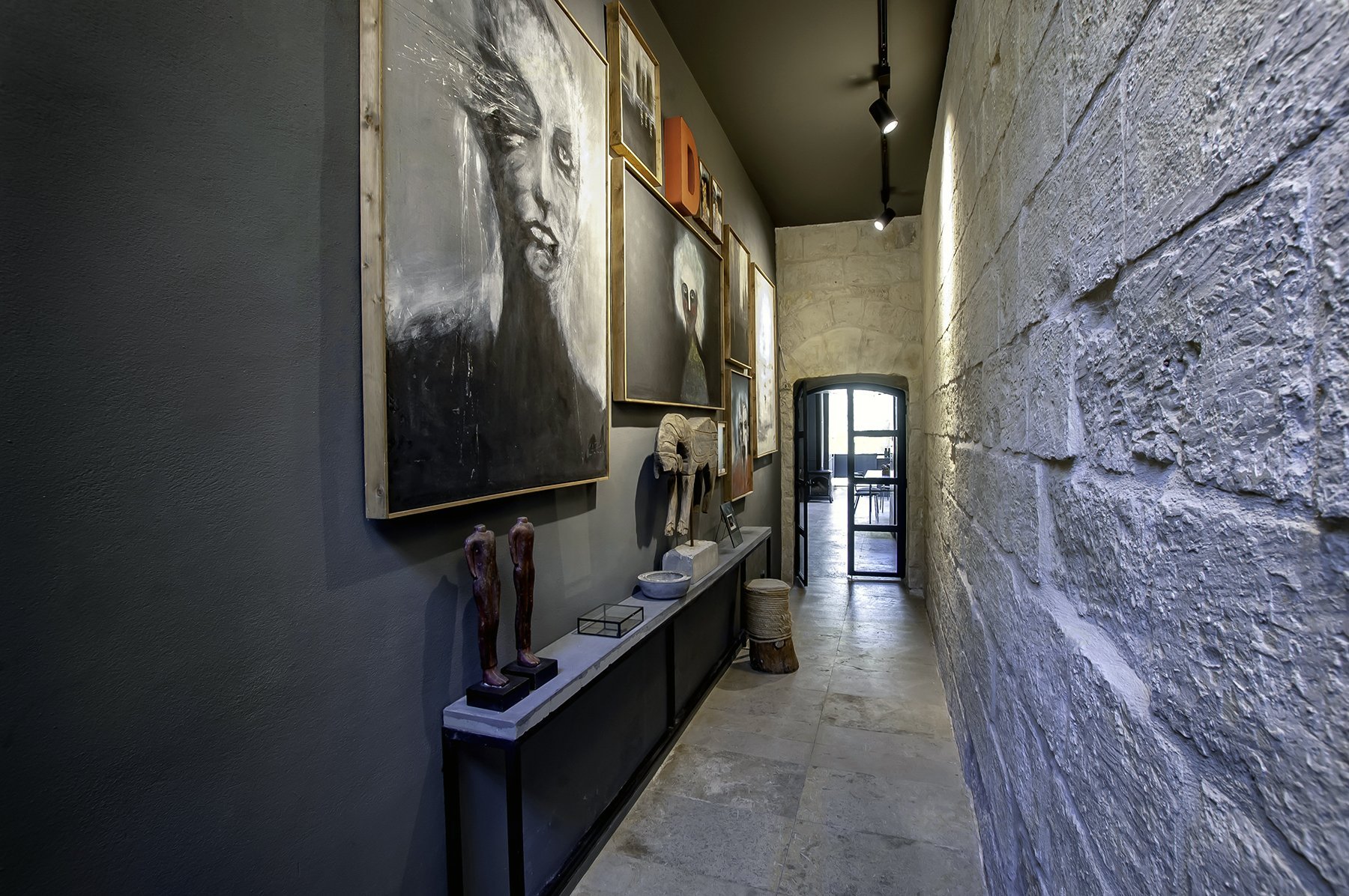 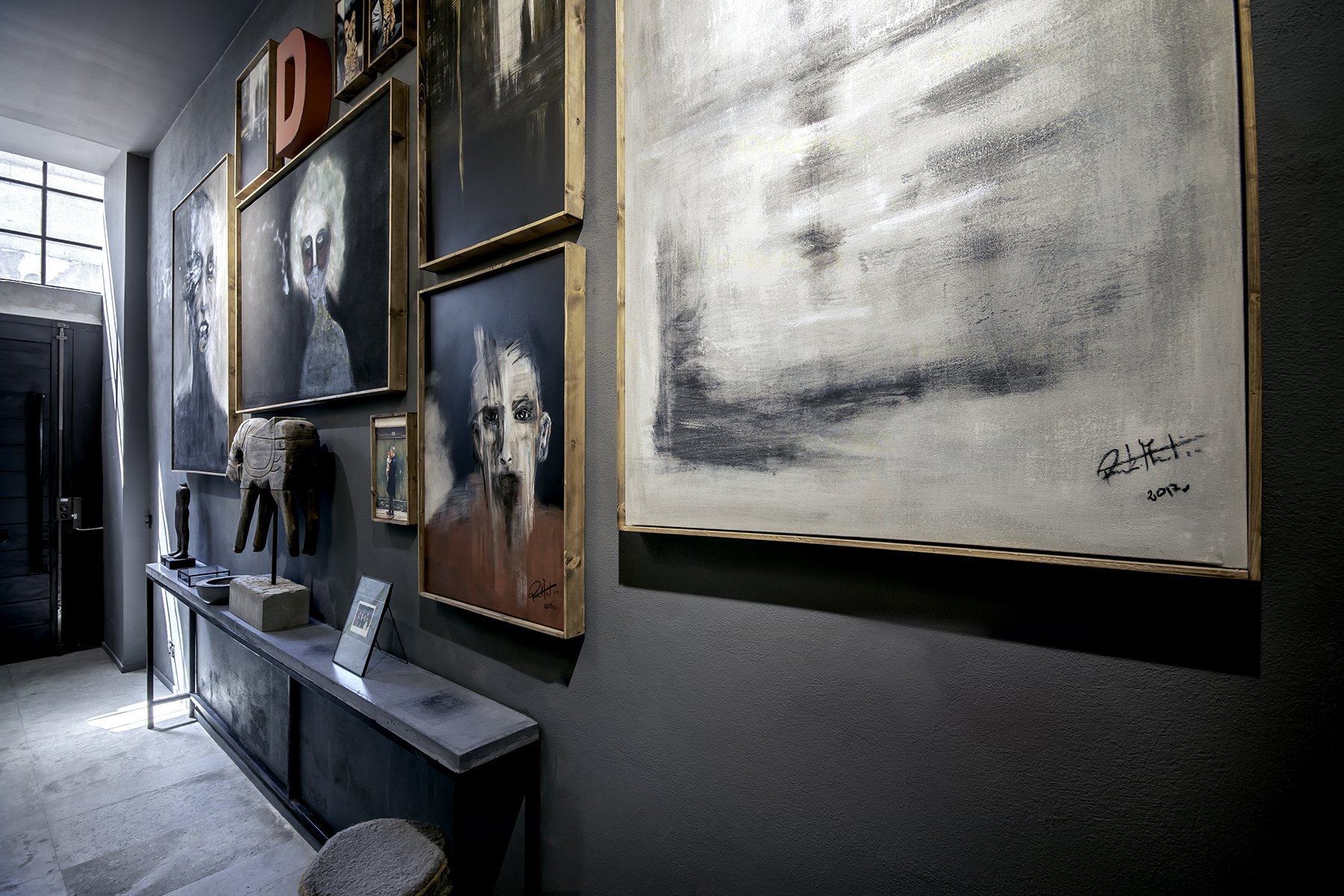 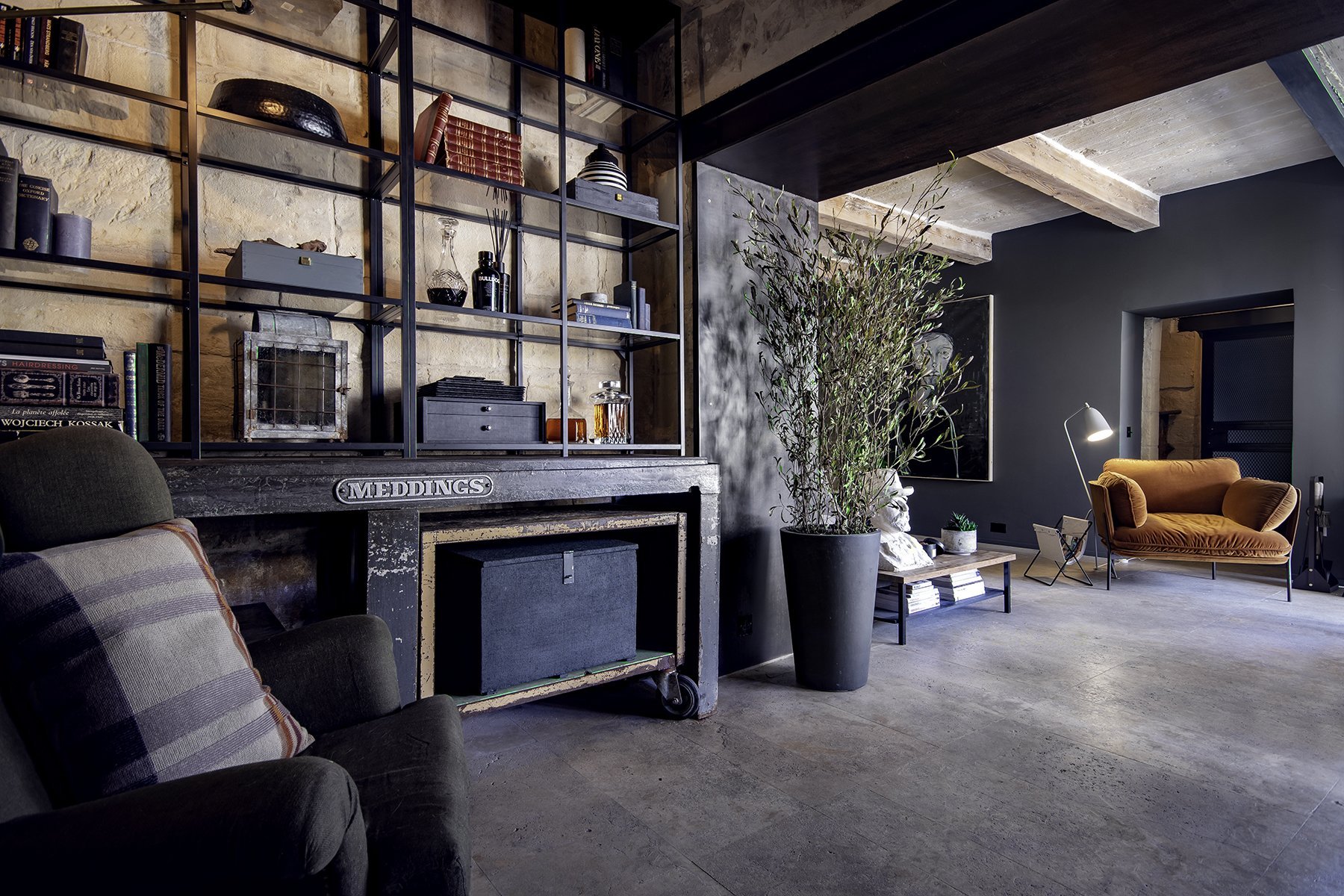 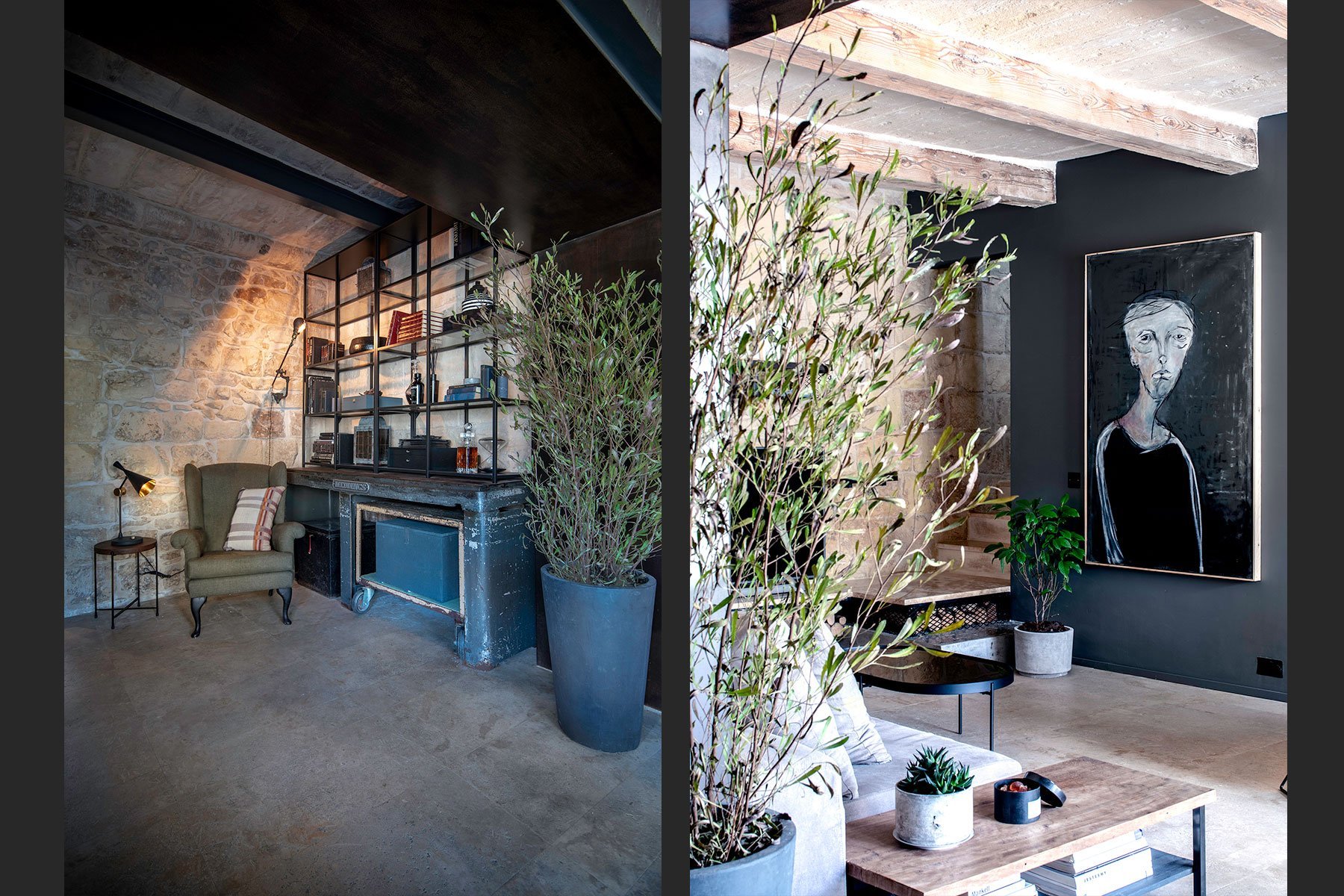 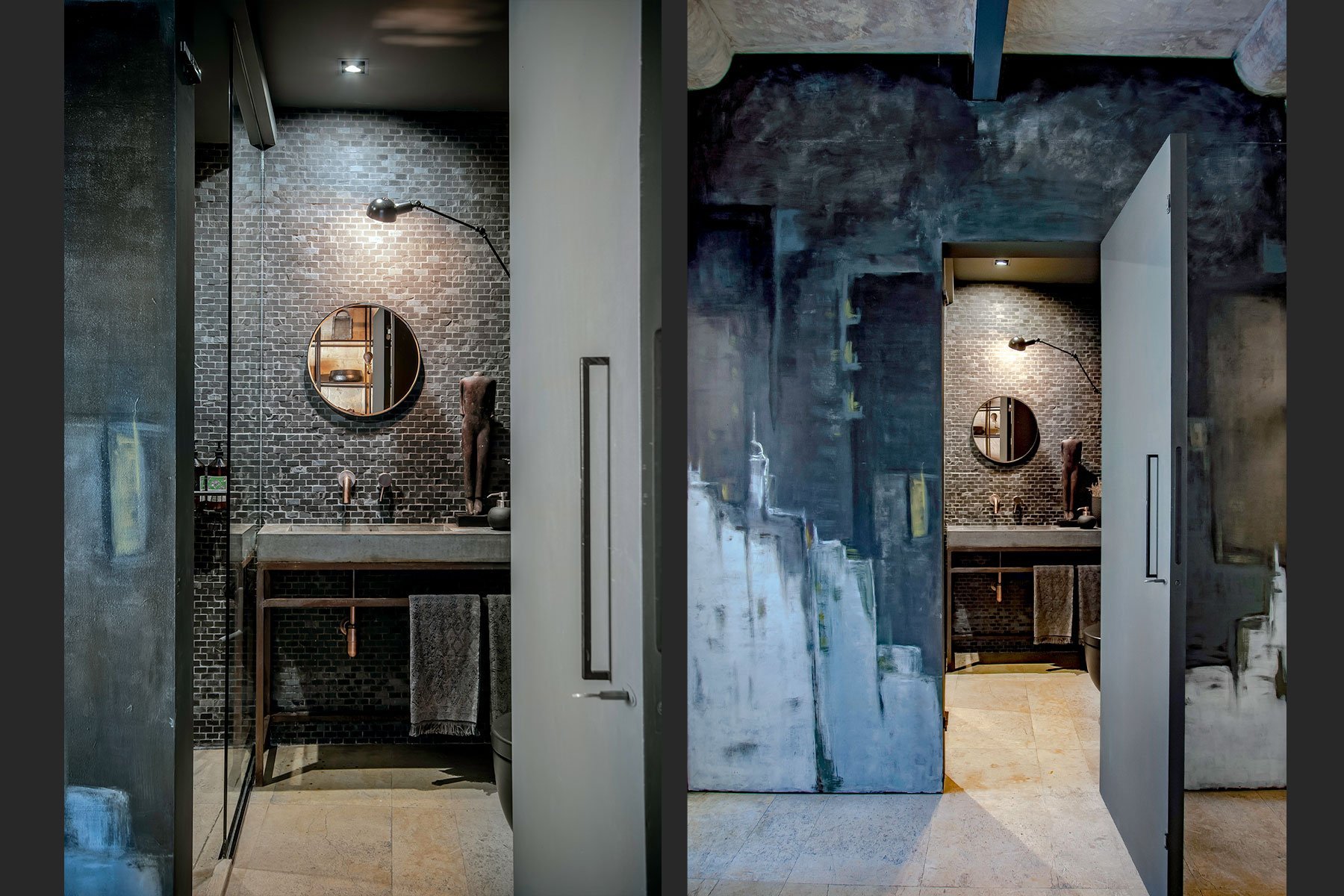 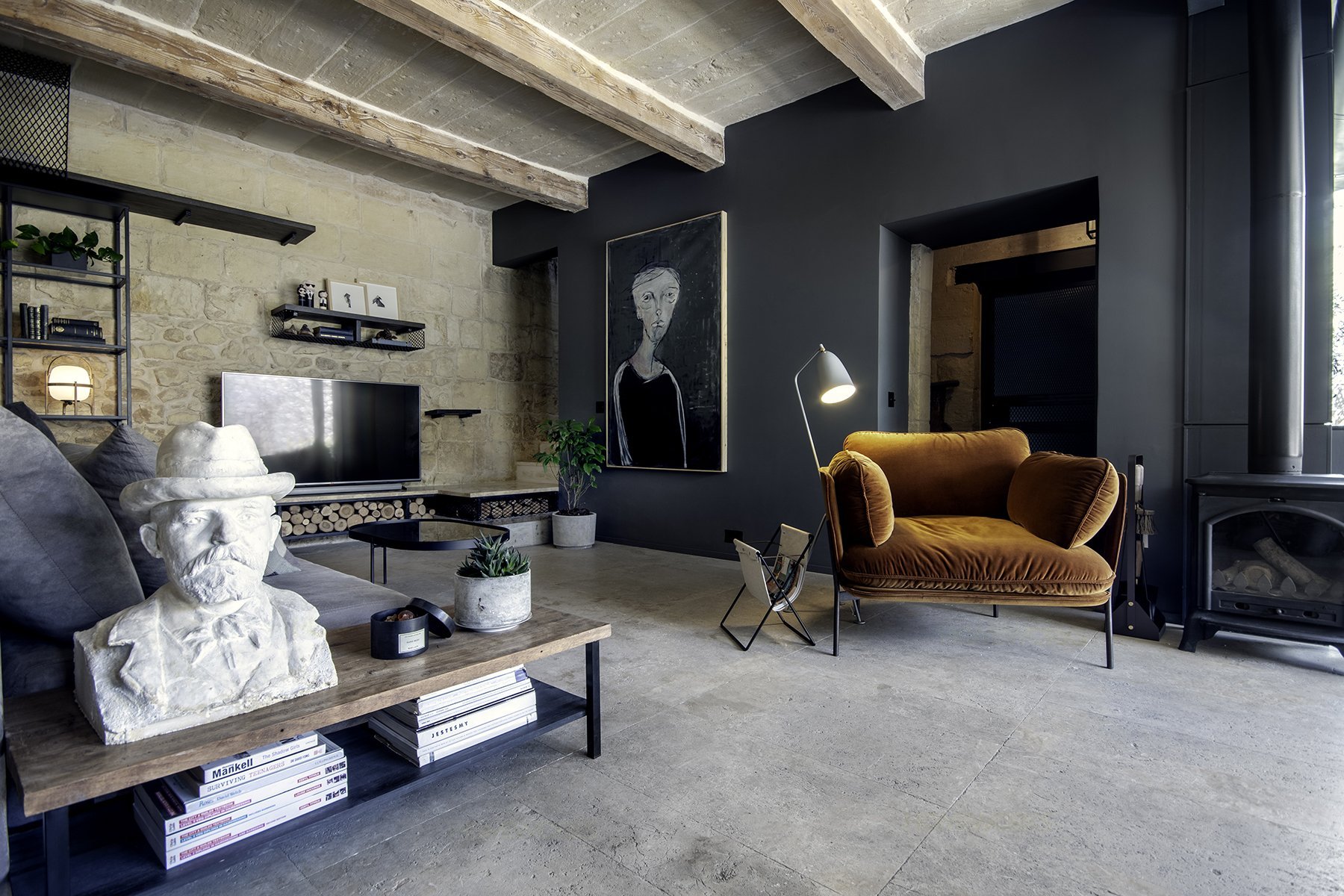 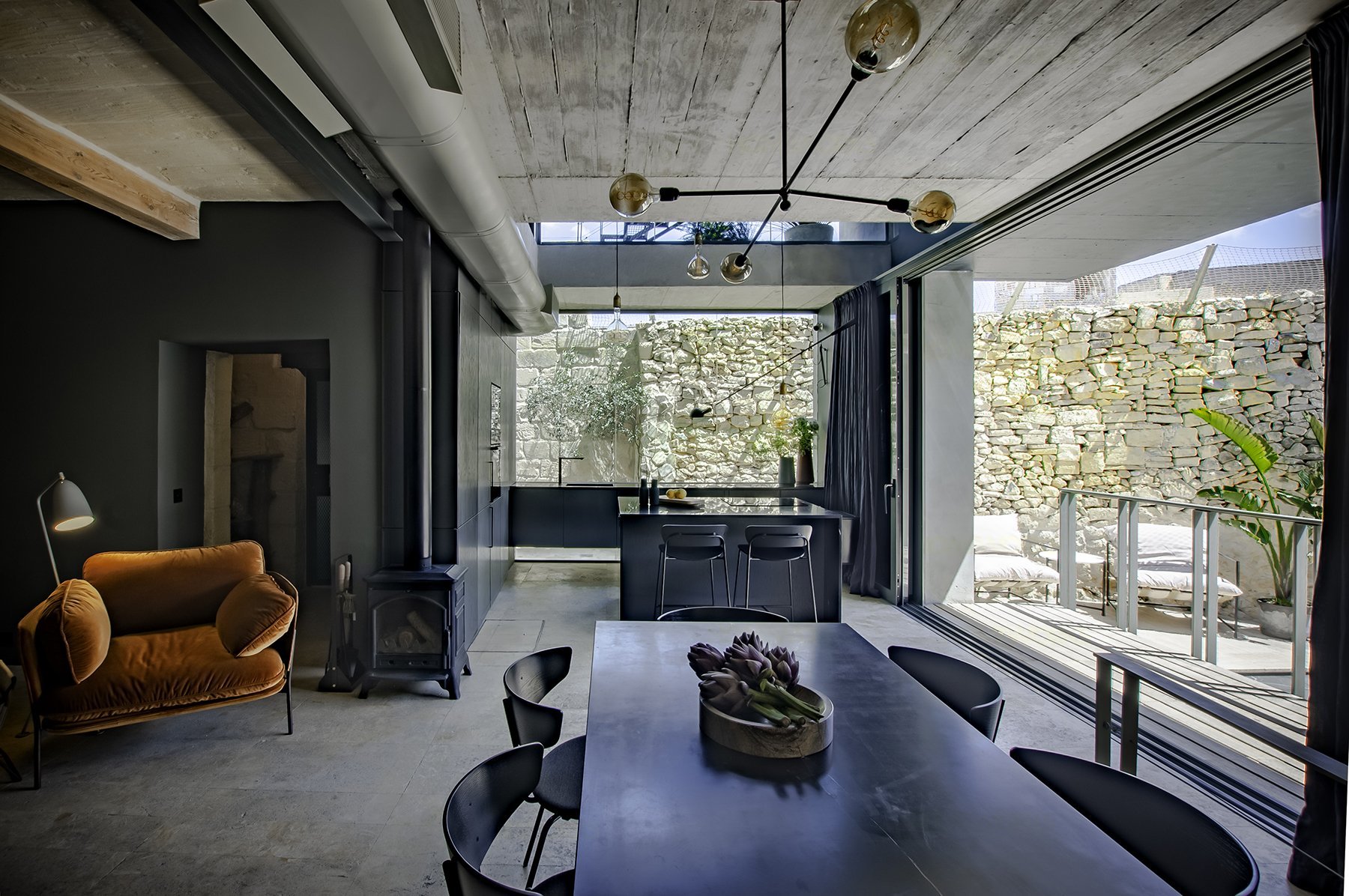 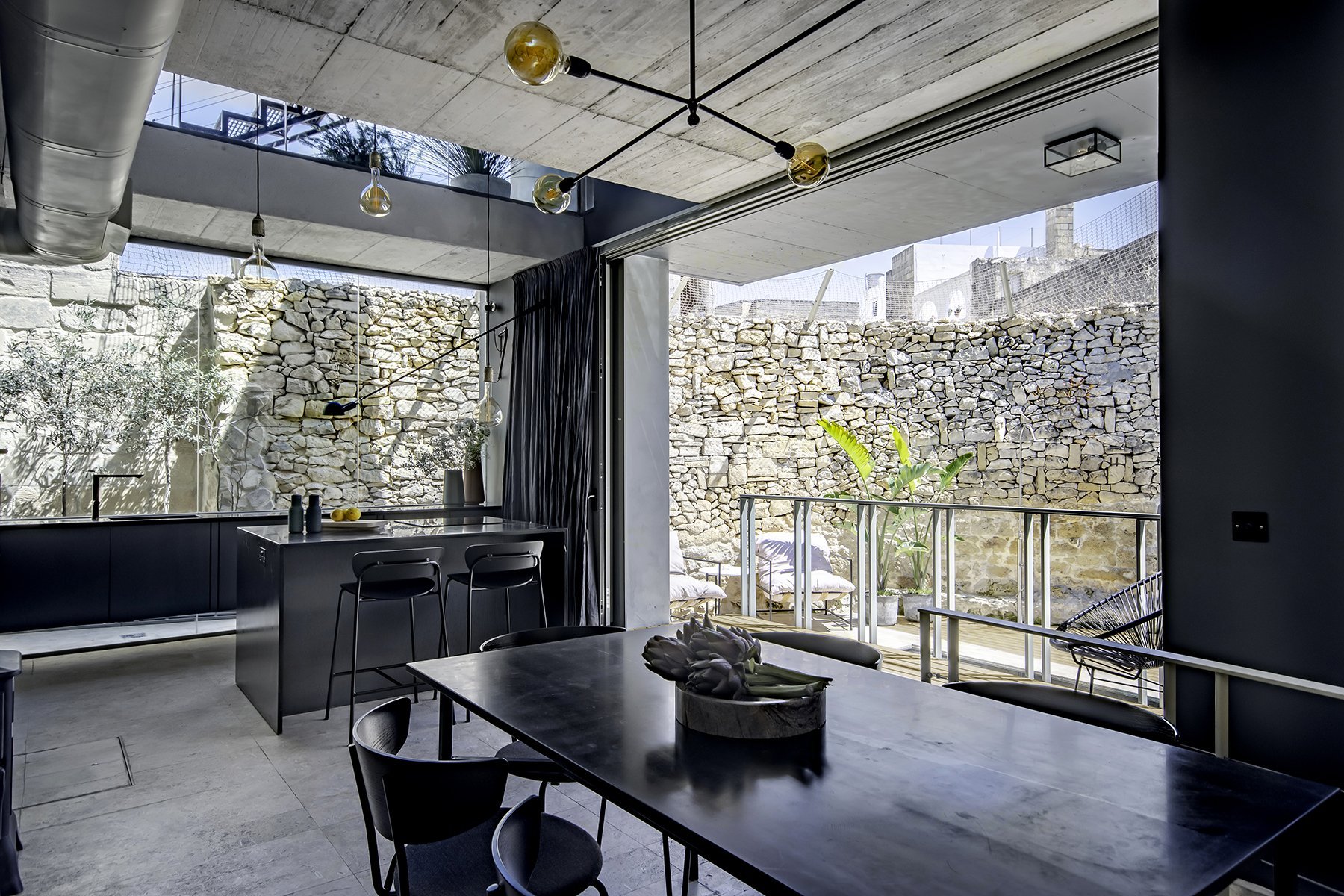 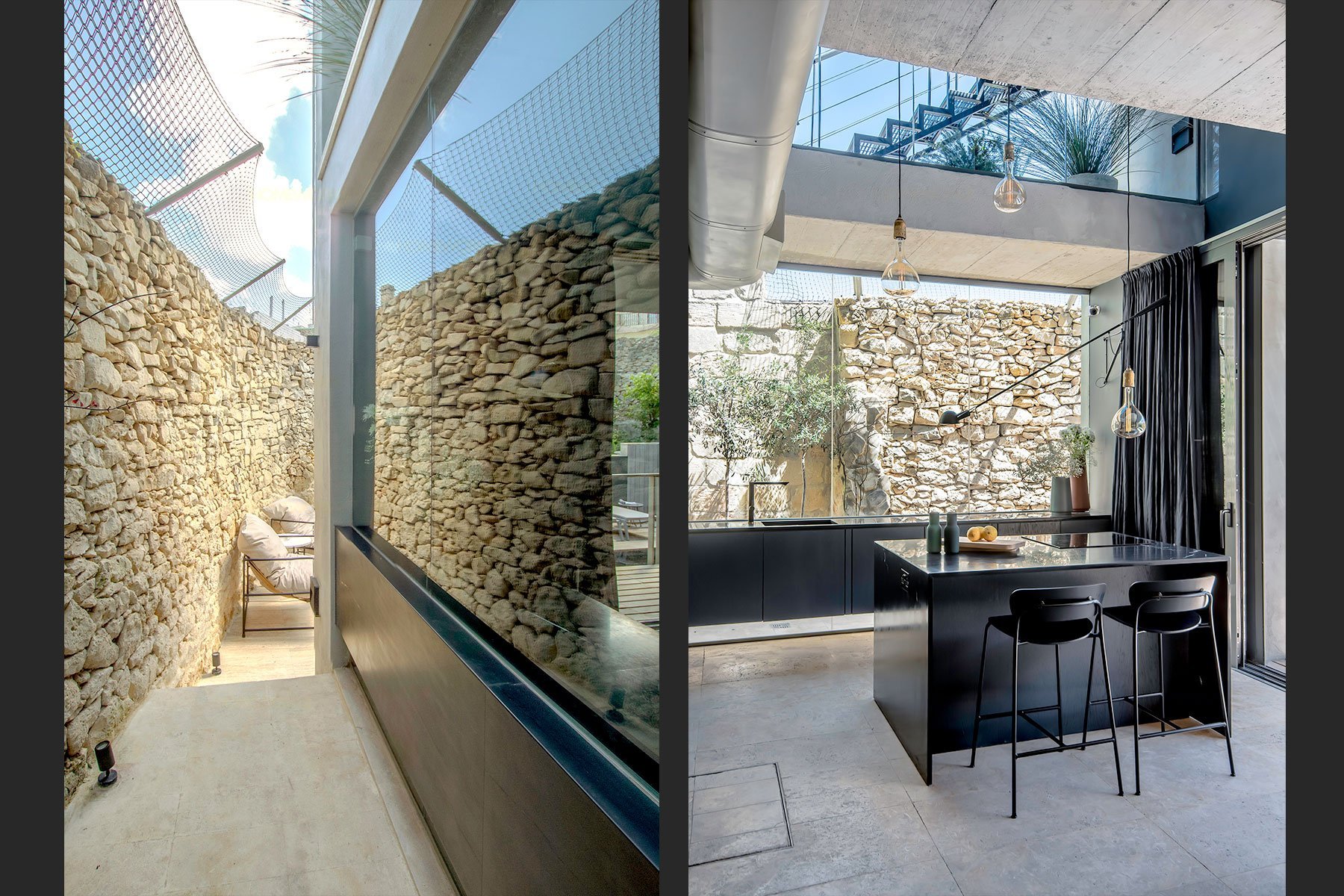 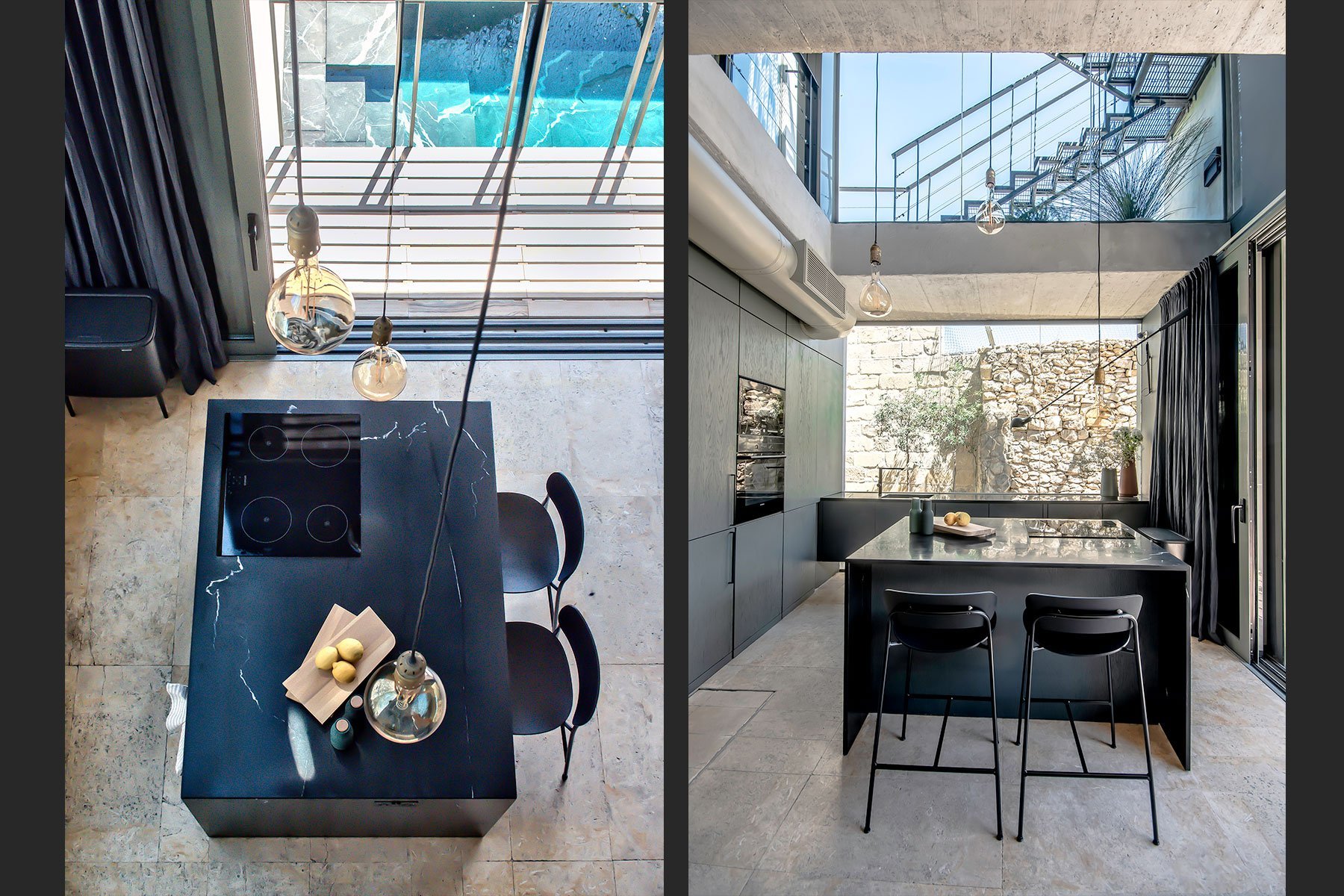 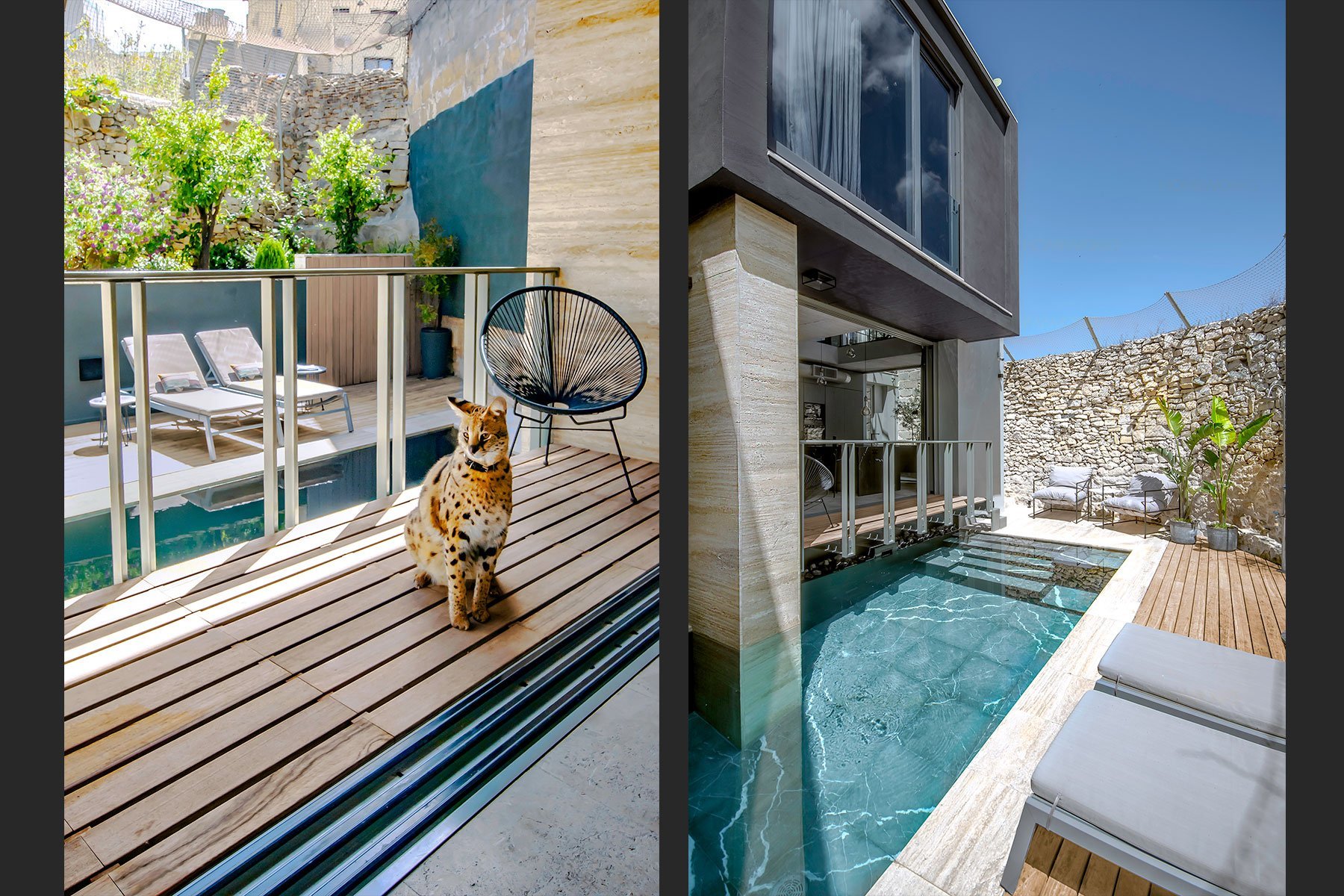 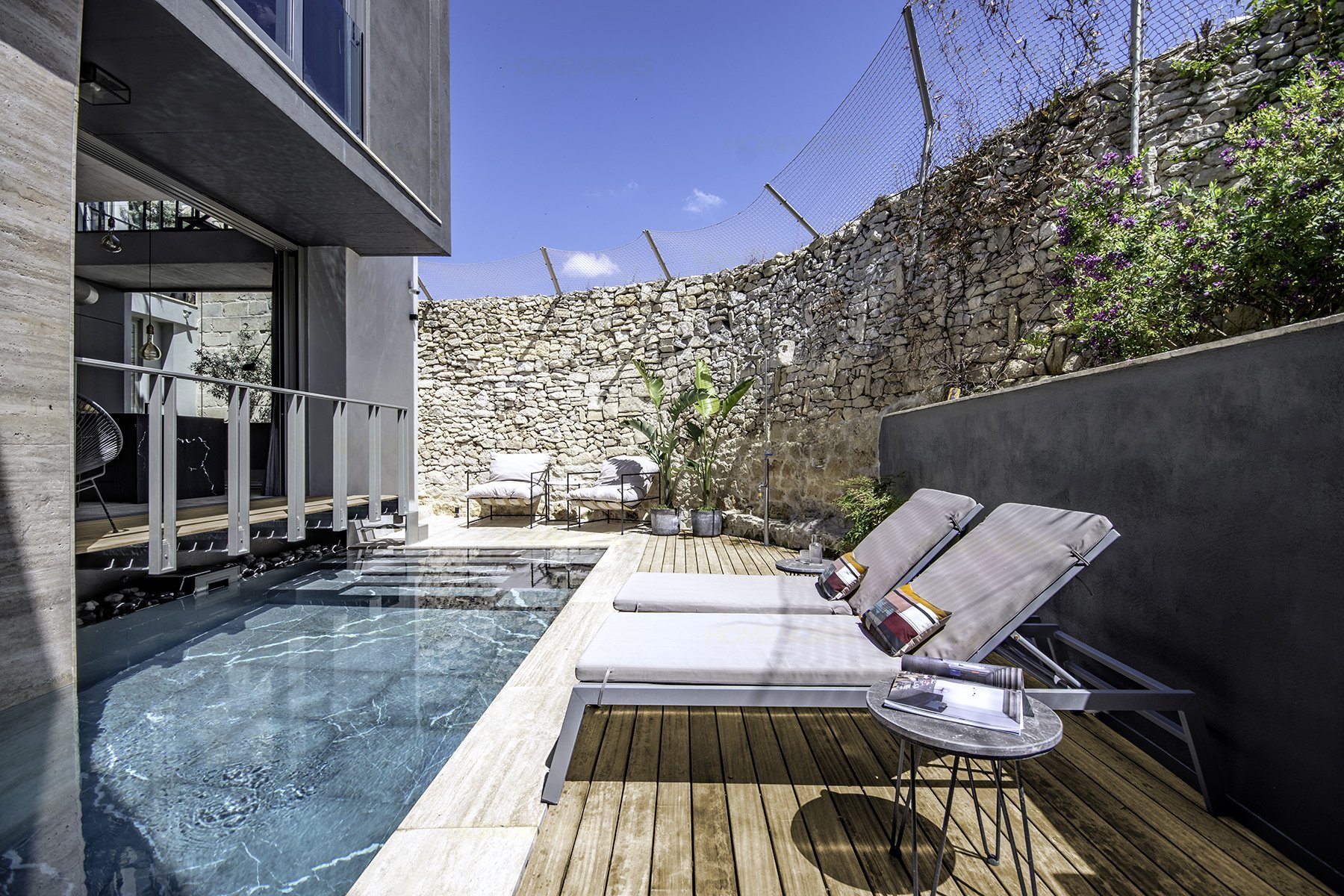 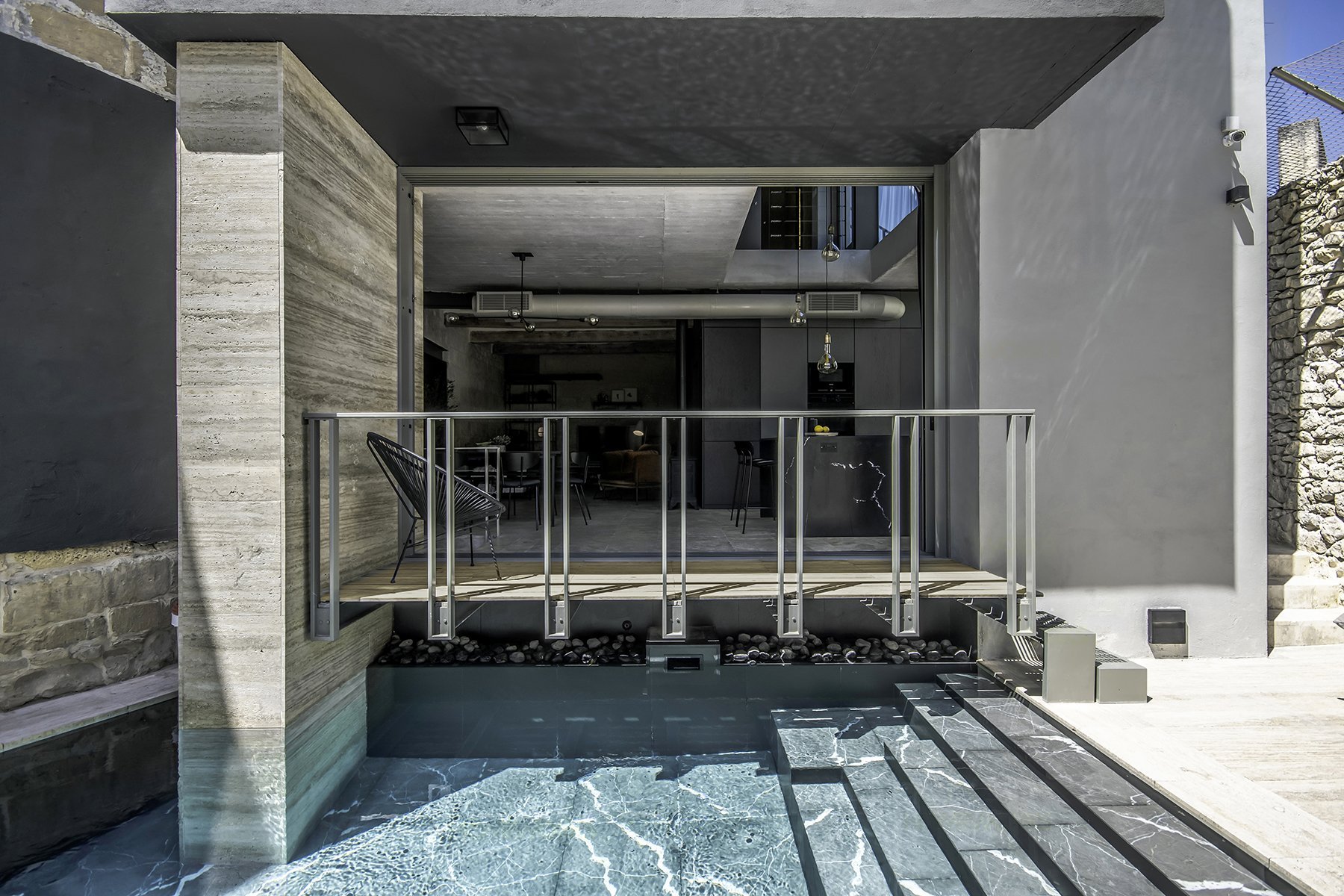 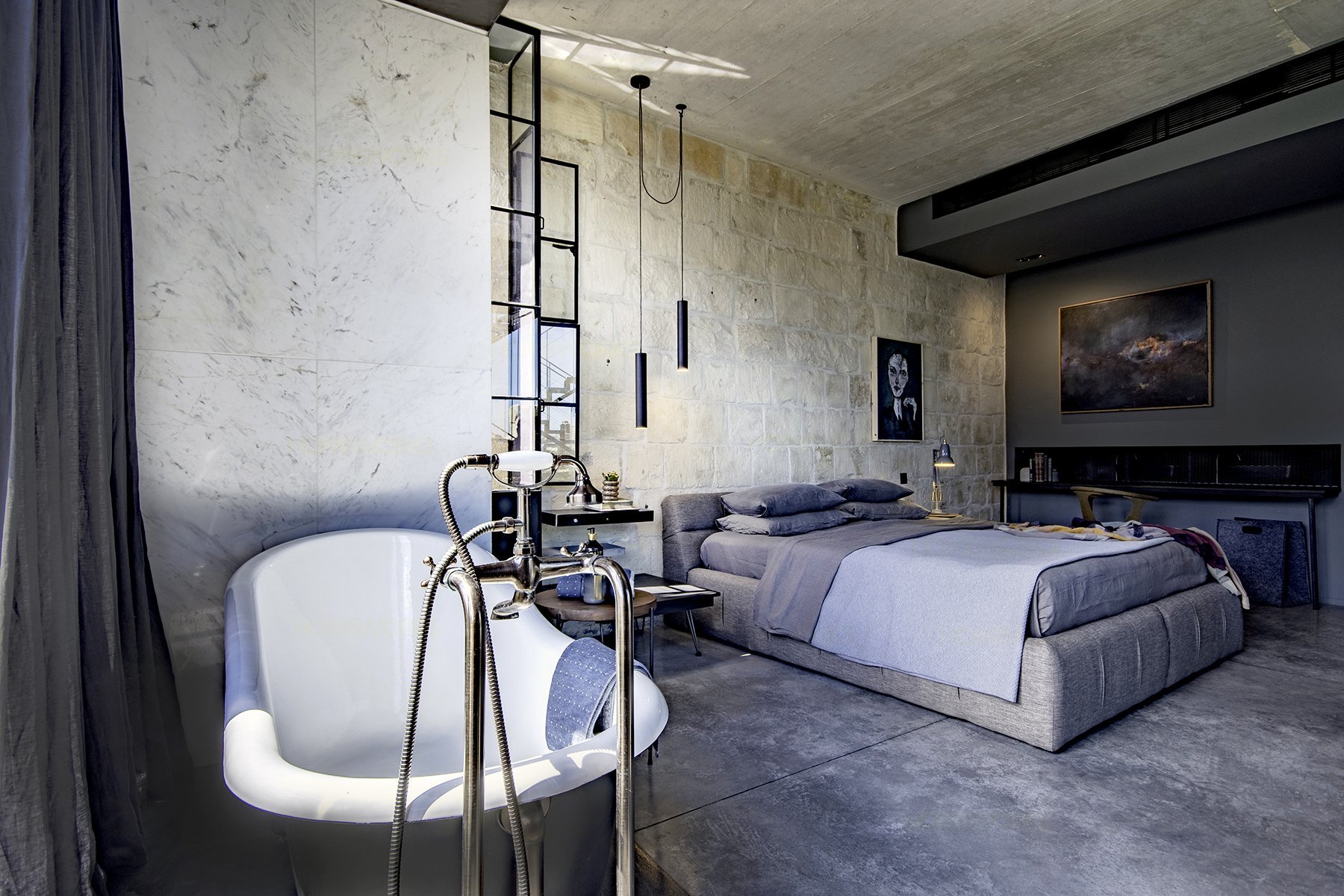 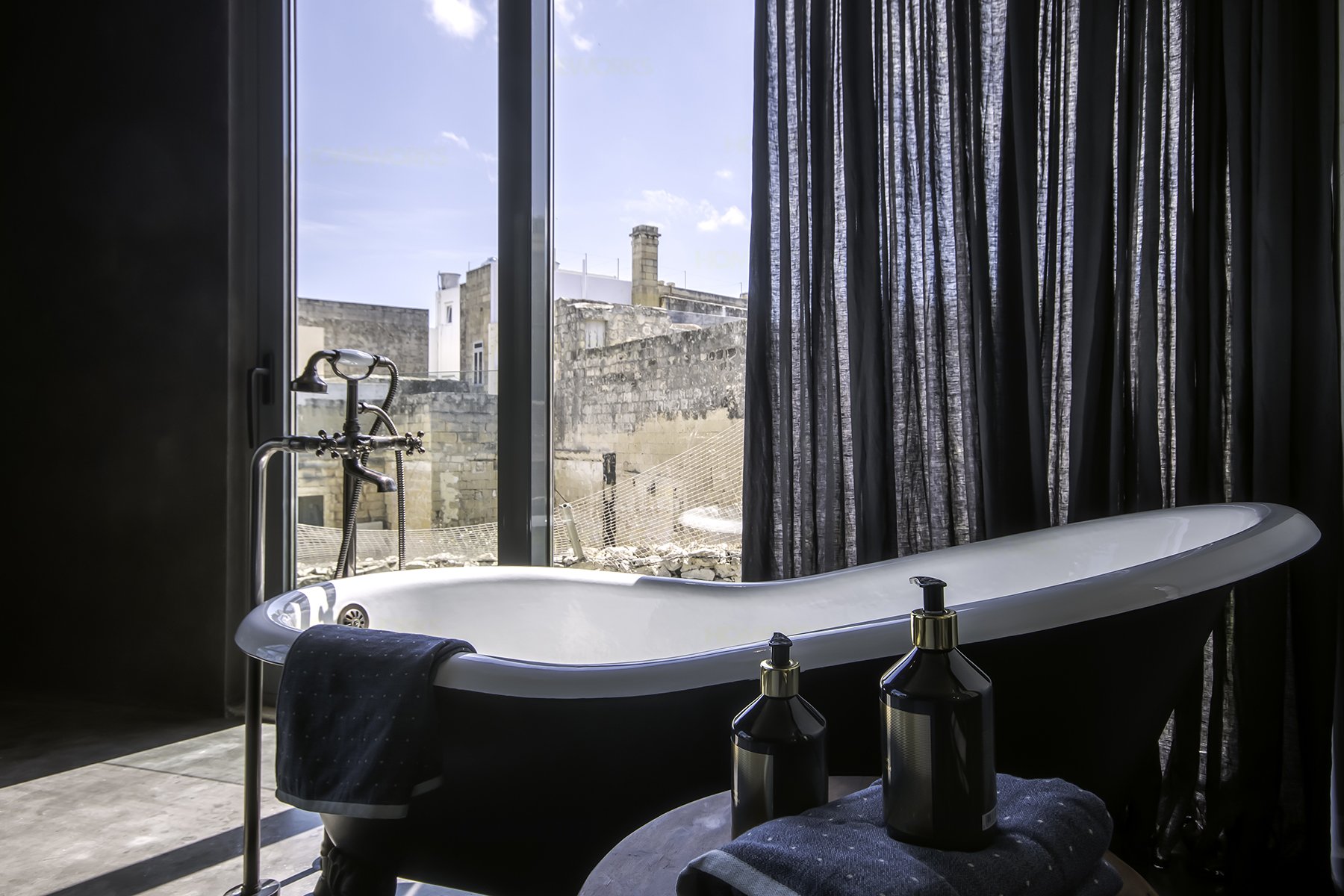 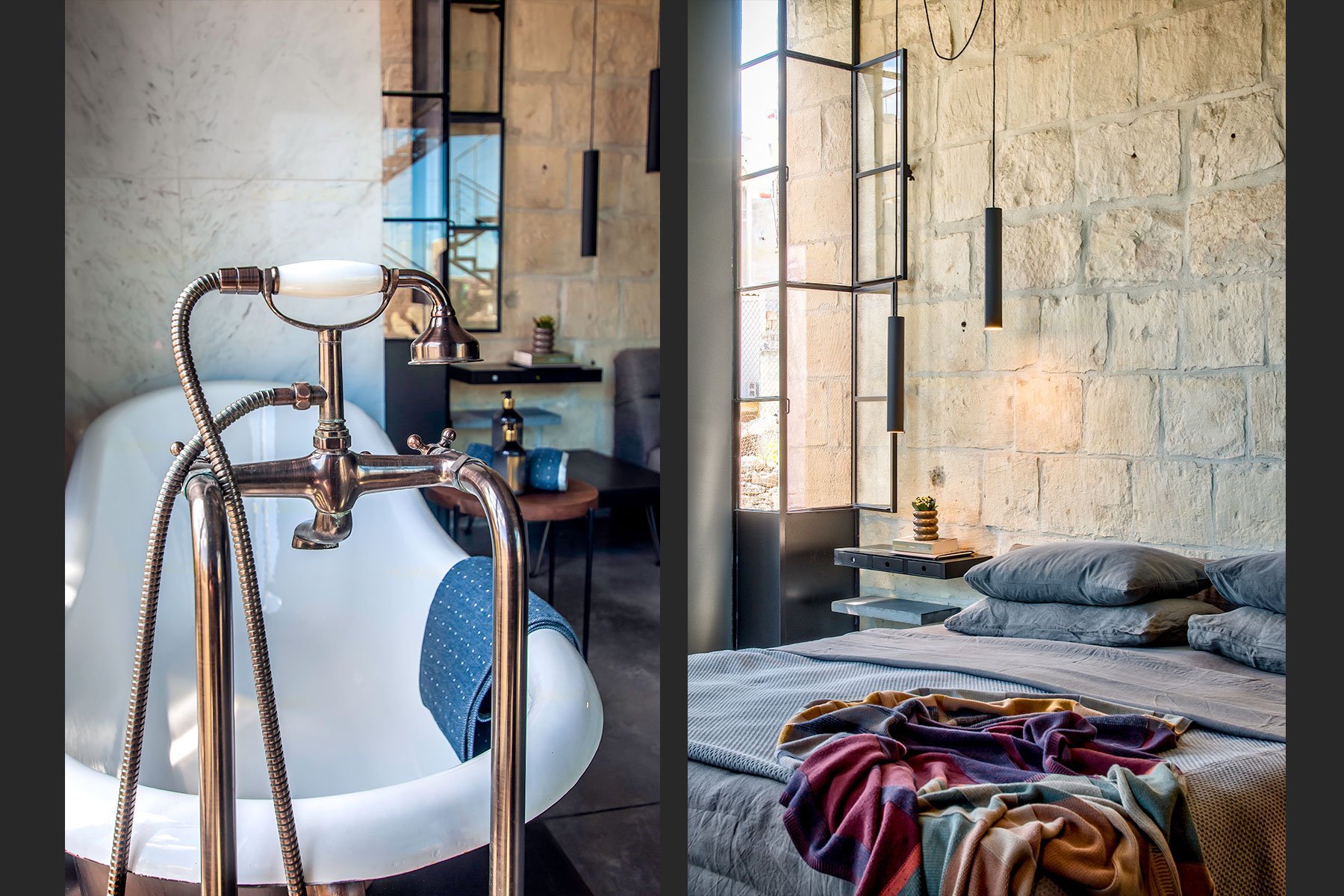 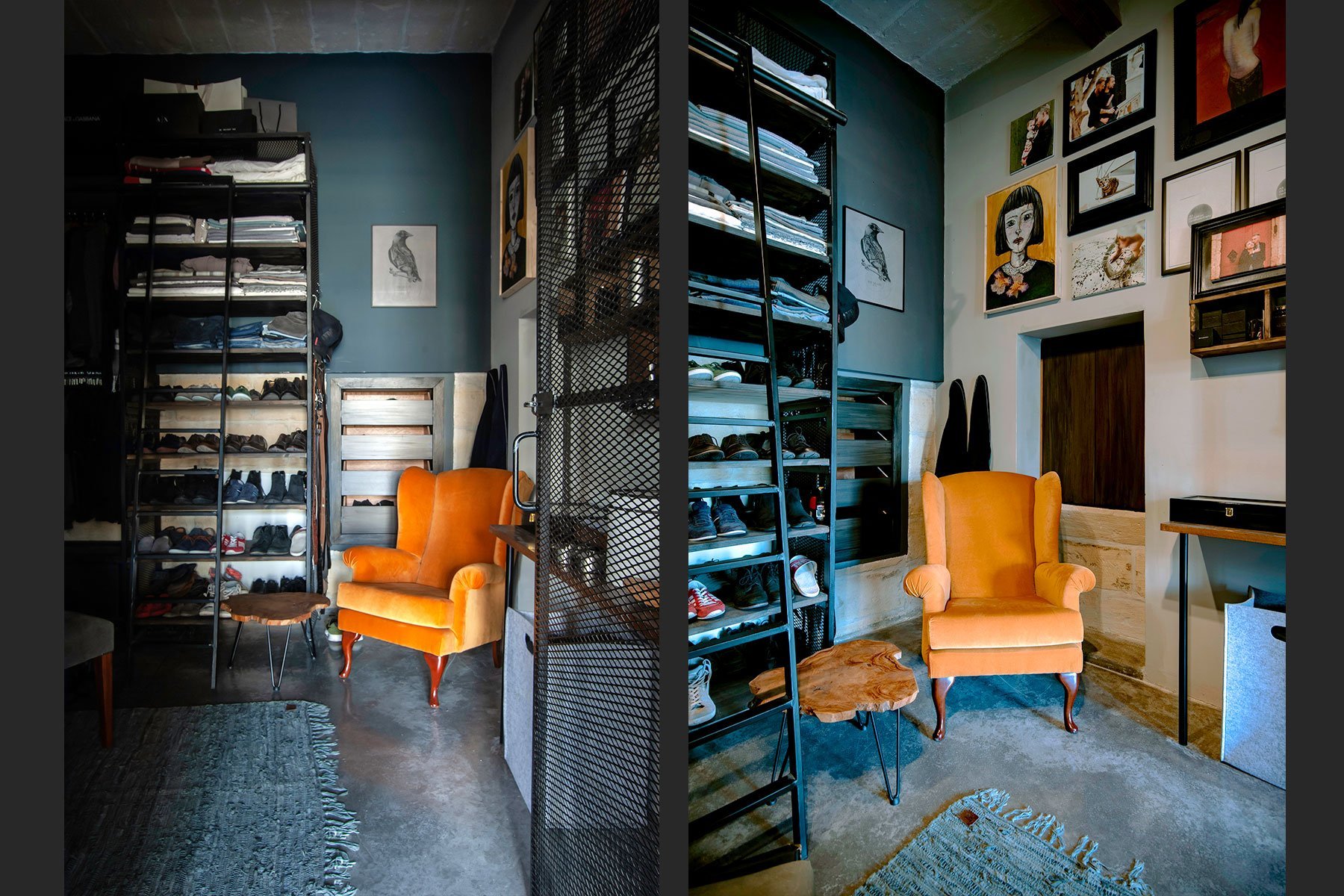 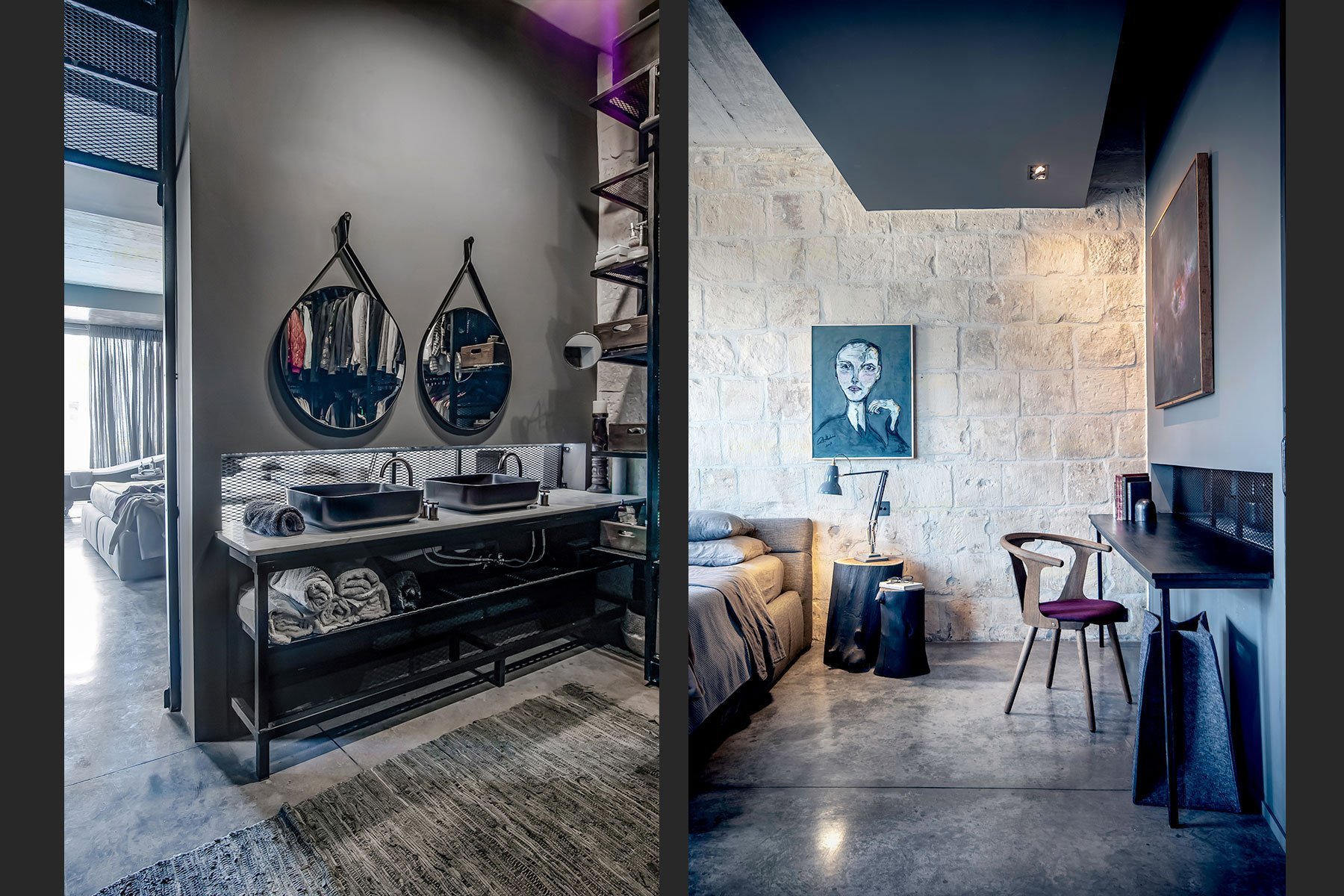 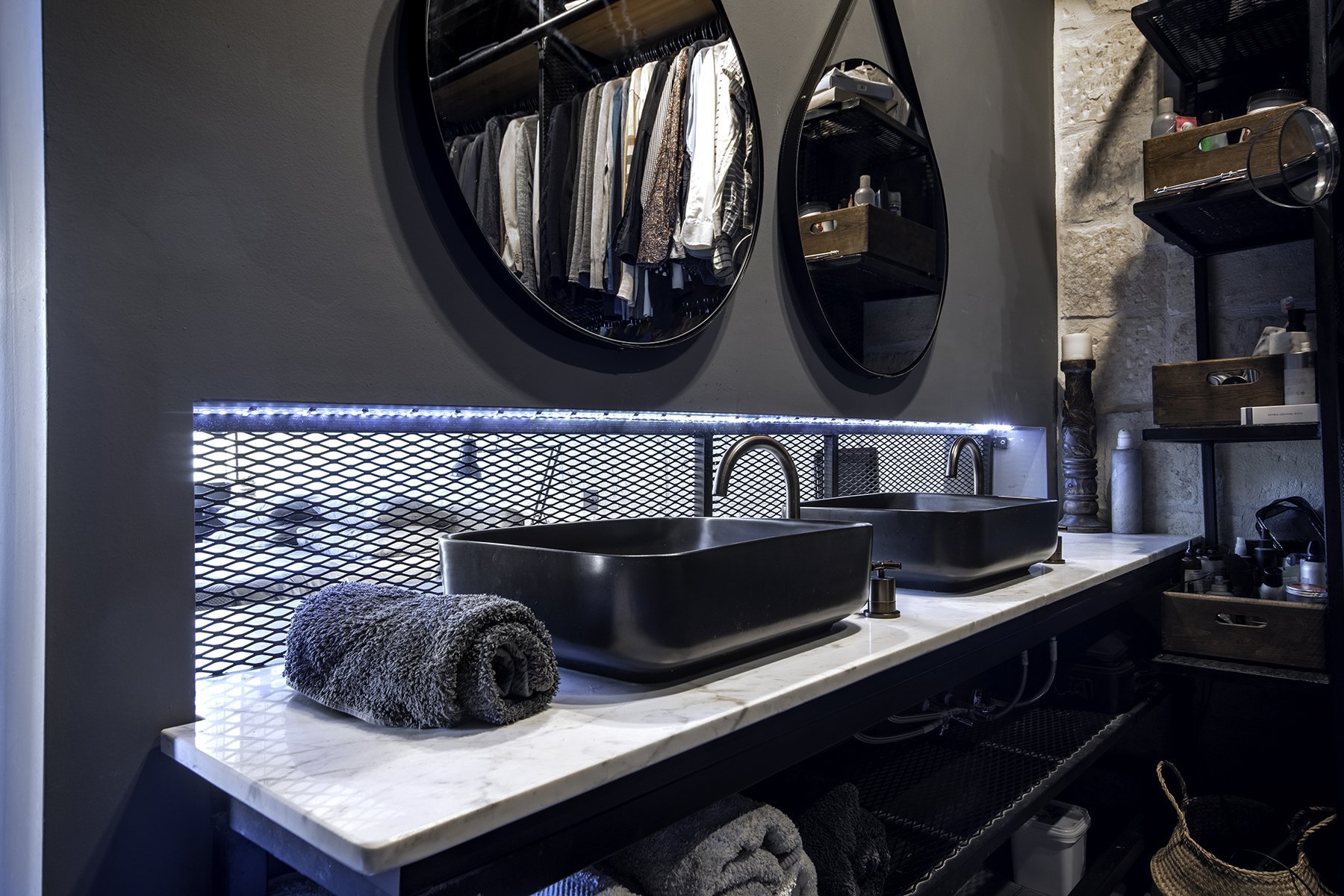 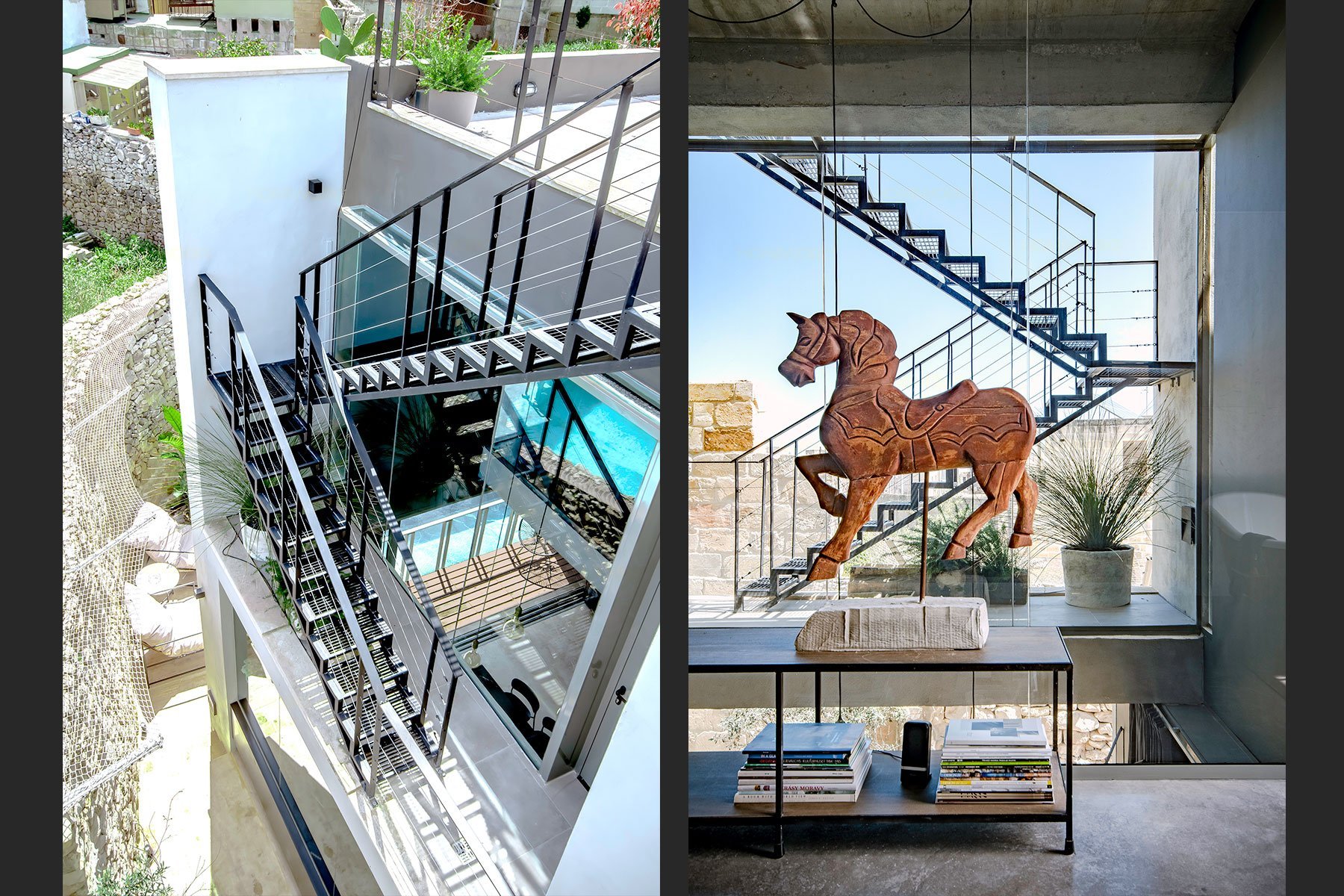